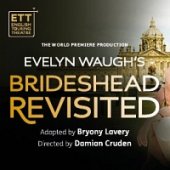 You know that you have intruded into the rarefied world of aristocratic superficiality when the star of the show is a Teddy Bear called Aloysius – who even takes a bow in the curtain call. I think I may have seen him being interviewed on the steps of the Richmond Theatre after the show but that could be a Flyte of fancy.*

Sebastian Flyte, owner of said bear, played with cool, charming decadence by Christopher Simpson, uses Aloysius as a comfort-blanket anti-christ, an aphrodisiac antidote to his dysfunctional family’s drug-dependance on a substance known as Catholicism. His life, seemingly like all the inhabitants of this upper crust world of hedonism and distrust, appears hollow but captivating which allows Charles Ryder, the sub-class outsider, to be drawn in, mesmerised by Sebastian’s congenial loucheness and tender depravity.

And once Sebastian has gone, hospitalised by alcoholism and then monasterised by his self-loathing, sister Julia steps in to consume Charles with passion number two from the Brideshead catalogue of beautiful-yet-flawed occupants. Brian Ferguson as Charles, narrator and pivotal character, displays an effective range of bewilderment, intrigue, infatuation and, finally, aloofness as he carefully constructs the personality of sorely bruised survivor.

Ferguson and Simpson are magnetic together as the two central characters of the first half whilst Ferguson and Rosie Hilal as Julia explode onto our consciousness in the second half with their scorching dialogue and smouldering lust in the magnificently staged storm-at- sea scene.

Damian Cruden’s direction, in conjunction with Sara Perks excellent design, dispenses with any notion of portrait-and- furniture laden antique pile as Brideshead Castle is envisaged, and instead goes for a stunningly effective black drape and cyclorama-lit setting to enhance and develop each particular piece of action in this multi-scene and varied location script. Thus we have a host of silhouettes, a feeling of draughty spaciousness and clever overlapping of scenes which keeps up a cracking pace for most of the play. Richard G.

Jones’s lighting design plays a large part in this with moods created and dispensed with quickly and seamlessly. Adding to the sense of Brideshead’s vastness is Sound Designer Yvonne Gilbert’s use of echo. Words tumble and reverberate and sound effects creep up on us like unexpected dinner guests.

Whilst appreciating the subtle accompaniment to the themes of the play that this soundscape provides I’m not sure that the use of a modern microphone and stand, brought on intermittently in plain sight, to pick up dialogue and effects, worked particularly well. To me it jarred with the carefully constructed ambience that had been created – as did the rather obtrusive mike cable in Charles Ryder’s hair.

Bryony Lavery’s script is slick and sleek and as faithful to the original inasmuch as a stage adaptation of a novel can be. After the pyrotechnics and theatrics that we had been treated to for most of the play the taut dialogue and tight characterisation starts to meander in the final long scene where Lord Marchmain takes to his deathbed. With the cast crowded in and around the imposing central-stage four-poster the scene is inevitably static and we crave the flamboyance of the previous action. It is the scene where Catholicism wreaks it’s own particular brand of havoc and as such is thematically necessary but some judicious pruning wouldn’t go amiss.

Kiran Sonia Sawar is appropriately bouncy and irritating as Sebastian’s younger sister Cordelia and Nick Blakeley is amusing and camp as a row of tents as Anthony Blanche, donning his (occasionally Scottish) Irish accent as Father Mackay. Multi-role playing is a feature of the show and Shuna Snow is a bit of a one trick pony as Bridey Flyte and Kurt: invariably physically bent at the waist and largely unintelligible in English and worse in German. As Rex Mottram, Snow imparts a strange androgyny coupled with a dubious Canadian accent which is uncomfortably out of kilter with the clean-cut vices of the English Upper Class: this, of course, may be the point but it didn’t work for me as suggested turpitude works better on stage than full-frontal debauchery.

The start of the show, as the audience take their seats, is intriguing as cast members flit over the stage, in and out of the black drapes and flats, silhouetted against the cyclorama, sharing jokes and secrets as if they were wandering round the vast chilly corridors of Brideshead: it reminded me of horses being shown the fences before the start of the Grand National to get used to them, an effective way to draw the audience in at the beginning. And the second half gets under way with a wonderfully vibrant and striking solo dance number by Samantha Lawson (who also plays Cara and Celia) which, in her pristine white garments and immaculate bleached wig, encapsulates the full sybaritic thrill and abandon of the Jazz Age.

When Evelyn Waugh wrote Brideshead Revisited in 1945, depressed by war and envisaging that socialism and impecuniousness would be the certain death of solely owner-occupied stately homes, he was describing an age that couldn’t compete with modernity. This production captures the spirit of that age, the mood, the delight and ultimately the doom-laden vacuousness that leaves Sebastian marooned, Julia captive and unfulfilled in a moribund marriage and Charles penniless, homeless and rudderless. We may not leave the auditorium uplifted by the themes but we recognise that this is a classy dramatic rendering of a classic novel.

*Footnote: In the 1981 Granada Television production of “Brideshead Revisited” Aloysius is played by Actor Peter Bull’s bear Delicatessen and is credited with inspiring the world-wide revival of interest in Teddy Bears causing Steiff bears to increase dramatically in value and attics to be scoured throughout the land.

During the midst of World War II, Captain Charles Ryder finds his past and present blur as he confronts memories of his first youthful encounter with the Marchmain family at Brideshead Castle. Falling under the spell of their privileged lives, Charles looks back at the way his own life would be changed forever by the summers spent with the seemingly charming Sebastian and his beautiful sister Julia.

Don’t miss the first large-scale stage adaptation of the evocative and timeless story that has captured audiences’ imaginations for over seventy years.

If the audience were to be exposed to full versions of the seventy-four songs listed in the programme, it would be a very long show indeed. I suppose … END_OF_DOCUMENT_TOKEN_TO_BE_REPLACED

How can a play be both charming and devastating? Through its tight script, abundant humour and pitch-perfect performances, 4th Country manages to … END_OF_DOCUMENT_TOKEN_TO_BE_REPLACED

Britain, so a London cab driver once told me, is obsessed with the Second World War, as though it happened just recently. Power Luncheon would seem, … END_OF_DOCUMENT_TOKEN_TO_BE_REPLACED