Home » Reviews » Review of BURIED CHILD at Trafalgar Studio One 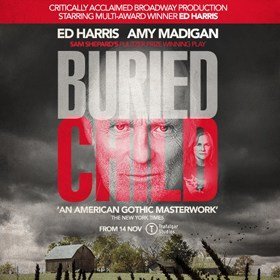 Sam Shepard’s Buried Child is a play that requires a Zeus among actors to embody the central character of Dodge, the whiskey-sipping patriarch confined to a sofa, unable to stand and fearing that his final breath on earth will pass unnoticed.

As far as I’m aware Dodge has not yet stood alongside Prince Hamlet, King Lear, Willy Loman or James Tyrone as one of the titans of theatrical folklore but make no mistake, Director Scott Elliott was already aware of Dodge’s potential when he approached Ed Harris to play the part which, to my mind, is a modern-day reworking of Odysseus and – Buried Child itself – a re-working of epic poetry.

It is difficult to exaggerate the power that radiates from Harris’ performance; it is subtle, complex, weary, violent and completely identifiable as an end that awaits us all – if we live long enough. If the themes of Buried Child appear as apocalyptic, murderous, shocking, then somehow we’ve lost a handle on the truth that marks the trajectory of a human life. Shepard asks only that we engage with the play’s disconnects, and with each character’s sincere effort to let us in on the story, which is not fully known – even to themselves – just like any real-life drama.

Set in an old farmhouse in rural Illinois, where the ground lies fallow and things have been known to disappear in the darkness, we are introduced to Dodge’s wife, Halie (Amy Madigan), a woman who spews pious drivel; Tilden (Barnaby Kay), Dodge’s simple-minded, vegetable cradling eldest son, who may or may not be dangerous; and Bradley (Gary Shelford) a younger one-legged offspring who shaves Dodge’s hair as he sleeps (think Samson). Bradley is more obviously dangerous. Later in the play, there is a homecoming, Dodge’s grandson Vince (Jeremy Irvine) and his girlfriend Shelly (Charlotte Hope), pay a road-side visit to the farmhouse, but instead of a warm welcoming, Vince is unrecognised by Dodge, his grandfather, or his father, Tilden.

If there is a character I’d like to know more about, it is Halie, Dodge’s wife. She is a brittle woman, and when we are first introduced to her she is a disembodied voice, one which pierces the upper level of the farmhouse – a stream of babble without pause – as if a terrible memory were to come flooding in if she were to stop talking. When she finally descends the staircase, she seems a woman whose entire life is held in check by fully boned stays. While the actions of Halie’s sons relate to a parable, rather than real life, I understood Halie as flesh and blood and, therefore, was more curious about what made her tick. She shares some of the characteristics of the mother who waits for the return of her dead son in Miller’s All My Sons, but with a Ma Barker flourish. Later in the play when she returns with Father Dewis (Jack Fortune), her lover – and it’s difficult to imagine that Halie can enjoy even the ashes of passion with any man – she reacts violently to the presence of Shelly, and it is here that we might get the sense of who Halie was as a younger woman, and what is forever lost. Directorially, I think there is more to plumb with Halie’s character.

All the creatives involved with Buried Child have performed an amazing feat and offered us a precious gift. This is not a revival of a play written in 1978, and first performed on Broadway in 1996. This is the introduction of a seminal work to be revisited and reseeded for generations of actors and theatre-goers to come.

Set in 1979 rural America as it reels from a recession and political unrest, the similarities between then and now are compelling in the run up to the American Presidential Election. Casting a brutal light on disenfranchised Americans, Buried Child is a dark, macabre and painfully funny family drama that is as relevant now as it was during its first run almost 40 years ago.

Dodge (Harris) and Halie (Madigan) are barely hanging on to their farmland and their sanity while looking after their two wayward grown sons. When their grandson Vince arrives with his girlfriend, no one seems to recognize him, and confusion abounds.  As Vince tries to make sense of the chaos, the rest of the family dances around a deep, dark secret. This wildly poetic and cuttingly funny take on the American family drama gleefully pulls apart the threadbare deluded visions of our families and our homes.

The pairing of work by Bob Dylan and Leonard Cohen in a single recital is a logical move. Though the latter died five years ago, his and his old … END_OF_DOCUMENT_TOKEN_TO_BE_REPLACED

If the dialogue wasn’t quite so eclectic and engaging, I might have decided to attempt to have kept a tally of how many times a trestle table is … END_OF_DOCUMENT_TOKEN_TO_BE_REPLACED

Doctor Who: Time Fracture by Immersive Everywhere has plenty to exhilarate both avid and casual Doctor Who fans, delivering on its promise to let … END_OF_DOCUMENT_TOKEN_TO_BE_REPLACED

A brief review of a brief play. It is, as the Prime Minister (Lisa Day) observes, extremely unlikely that her ‘letter of last resort’ would ever … END_OF_DOCUMENT_TOKEN_TO_BE_REPLACED

It’s a production of Hamlet that starts at 7:30pm and manages to come down on the ‘right’ side of 10:30pm - the hardcore fans and followers of … END_OF_DOCUMENT_TOKEN_TO_BE_REPLACED