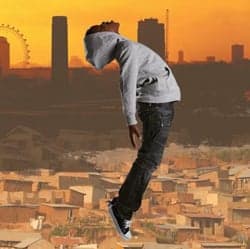 Refugee Boy is performed within an unconventional theatre setting. With simple yet effective moving set and props, images of fast-paced isolation are created that portray the fear in experiencing the loss of everything and trying to re-establish a home. With a cast made up of 15 performers from all different ethnicities, life experiences, and ages, the performance fuses theatre, poetry and movement which powerfully combine to address the international nature of this ongoing crisis.

Considering the age of most of the cast, the commitment and integrity of their performance is truly heartwarming. The work is both emotional and educational and it is exceptional to see young performers investing so maturely into the characters the way they were able to. There is a richness in the performance through the way the cast move together so well, yet a necessary element of vulnerability.

An outstandingly moving performance from Demar Lambert who played the lead part of 14-year-old ‘refugee boy’ Alem, who is left alone in the UK for the safety of his life. The story and performance invite the audience to draw closer and explore this personal story of desperation, isolation and human tragedy ultimately allowing us to empathise with the suffering of so many refugees.

Refugee Boy has been carefully and brilliantly directed by Jelena Budimir who when speaking about Chickenshed Theatre states ‘we have always challenged labels and – while still recognising difference – the company has benefited from the inclusion of all’. A 5* performance from Chickenshed Theatre that truly touches home about finding beauty even in the harshness of our world. Where so many are displaced, it is heartening that there remain both people and places that offer some refuge.

Benjamin Zephaniah is a much-loved and celebrated British Jamaican poet, who has featured in The Times list of Britain’s top 50 post-war writers. Refugee Boy is a powerful and moving story based on his acclaimed book, and tells the story of 14-year-old Alem, a refugee forced to flee his family and country for London in the late 1990s, to escape civil war at home in the disputed region between Ethiopia and Eritrea. As a child of parents from both regions, Alem is in great danger from the forces of both sides, and is forced to seek safety alone in the UK.

The story follows Alem’s experiences in London in a warm-hearted tale of hope, family and identity. For Alem, the challenge is fitting in and growing up in a country very different from his own, and being there without the family he loves.

Adapted for the stage by Lemn Sissay, Refugee Boy brilliantly continues Chickenshed’s exploration of the issues surrounding refugees and immigration, as recently examined so powerfully in the sell-out run of Kindertransport.

I have seen some outstanding acting recently at the intimate Finborough Theatre, and this new play is no exception. The highly talented cast quickly … END_OF_DOCUMENT_TOKEN_TO_BE_REPLACED

In the pandemic (remember that?) I worked in adult social care. My role was to help older people in their own homes with daily tasks - I’d cook meals, … END_OF_DOCUMENT_TOKEN_TO_BE_REPLACED

The world-famous Wilton’s Music Hall and the children’s classic The Wind in the Willows make perfect bedfellows. Piers Torday has written a version … END_OF_DOCUMENT_TOKEN_TO_BE_REPLACED

Some journalists get, as it were, a bad press, though some of them don’t help themselves with some of the things they write and do. This play doesn’t, … END_OF_DOCUMENT_TOKEN_TO_BE_REPLACED

Paul (Lewis Bruniges) and Freddie Metz (Oliver Yellop), who identify as cousins, are so desperate to get out of the German Democratic Republic, … END_OF_DOCUMENT_TOKEN_TO_BE_REPLACED