Home » Reviews » Review of Combustion at the Arcola Theatre 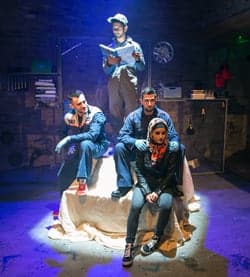 Asif Khan will be familiar to London audiences primarily as an actor, but in Combustion, he proves to be as adept a playwright as a performer. With this new work, he joins a small but growing canon of writers offering a counter-narrative to an increasingly shrill chorus of Islamaphobic and anti-Muslim rhetoric. Fundamentally, the play grapples with what has become a defining feature of the British Muslim experience: complicity. Does silence confirm your collusion? Does speaking up qualify your betrayal?

Shaz (Beruce Khan), as devout a businessman as he is a Muslim, works hard to grow his burgeoning car mechanic’s garage while supporting his widowed mother and university student sister Samina (Shireen Farkhoy). His two employees, Ali (Rez Kempton) and Faisal (Mitesh Soni), respect their boss, working with varying degrees of diligence and competence in an atmosphere of jovial camaraderie. And yet, as ‘normal’ and run-of-the-mill as their Bradford existences seem, their lives are – despite themselves – deeply politicised. Their sunset prayers for Ramadan are parenthesised by discussions of Pakistani men guilty of raping underaged white girls; Samina’s daily walk to and from class is an exercise in dread as she averts the outraged glares of those who wordlessly protest her hijab; Shaz’s engagement to the girl of his dreams suffers the consequences of his sister’s reluctant celebrity as Bradford’s own prophet of peace.

Thus Khan cleverly exposes the awkward position the Muslim community is forced to adopt. On the one hand, they are expected to be quiescent, integrated, and functional members of society; on the other, that self-same quiescence must be loud enough to prove their disjunction from the perpetually prohibitive definitions of ‘radical Islam’. As such, all four of the Asian characters find themselves trapped both by the vicissitudes of Western expectation, and the necessities of “being a good Muslim”, itself the source of vigorous debate within the play. Never is this more tangibly illustrated than in the literal cage the characters weave in and out of at the back of the stage, innovatively designed by Mila Sanders to double up as the back wall of a mechanic’s garage.

Nevertheless, Khan is careful neither to consecrate the Muslim community nor vilify British society. Shaz’s patriarchal tyranny is an unresolved hangover from his Pakistani heritage, just as Ali’s professed piety cannot prevent him from succumbing to darker appetites. Meanwhile, the only white character, Andy – invested with intelligent emotional range by Nigel Hastings – isn’t a crudely drawn English Defence League ogre, but a man capable of incremental transformation.

The directing style is bold, and Nona Shepphard has forgone any pretense of naturalism, choosing instead to accentuate the necessity of the discussion by the immediacy of the performances. In a production that places so much emphasis on scrutiny and observation (the actors never leave the stage, lurking instead in the background, eyeing the audience from behind bars) Shepphard’s gamble pays off, emphasising the perilous pageantry Muslims are expected to engage in. Farkhoy, in particular, stands out, embracing the exaggerated swagger the director has imposed: her Samina is urgent and dignified, a soap-box rabble-rouser played with the infectious exigency of a woman torn between cultures. Also beautifully depicted is Soni’s Faisal, who eschews simplistic comic characterisation by investing his ‘fool’ with enough integrity and sincerity to make his trajectory the most edifying by play’s end.

It’s impossible to watch this play without thinking of Spike Lee’s 1989 classic Do The Right Thing, in which a culturally disparate Brooklyn neighbourhood finally bursts into febrile conflict on the hottest day of the year. So too in Combustion, as the fever of protest sweeps through this Bradford community, the characters are forced to confront their ideologies if they are to prevent the tinderbox from igniting. Shepphard and her team encourage the audience to avoid the pitfalls of homogenisation, highlighting the particularities of individuals over the conformity of community. Indeed, whether it be the dangerously ill-informed populism of world leaders, or simply the idle chit-chat of proto-Nationalists in your local pub, there is palpable and perhaps understandable apprehension about Muslim integration in Western society. Combustion offers one very clear, very definitive solution: dialogue.

Set in his home city in the month of Ramadan, Combustion is the first full-length play by Bradford-born Asif Khan, a new comic drama set in a local garage in the lead-up to a march by far-right nationalists. Following its run at Tara Theatre, Combustion will transfer directly to Arcola Theatre before a UK tour.

Khan made his mark as an actor in the ensemble cast of Snookered (Tamasha/Bush) and performed in Tara Arts’ recent Paradise of the Assassins as well as Love, Bombs and Apples at Arcola Theatre and its UK Tour. As a writer, Khan has recently been named in the recent BBC New Talent Hotlist 2017. He is a member of the Tamasha Playwrights Group, and has been commissioned to write a full-length play with Tamasha. Combustion was selected as one of six new plays for the Arcola Theatre’s play WROUGHT#2 Festival, 2014.

In Combustion, racists plan to march through the Bradford during Ramadan, inflaming local tensions. Meanwhile Shaz, a local garage mechanic, desperately tries to keep his business running smoothly so he can marry well. In this volatile environment, Shaz’s sister Samina is determined to make her voice heard.

The cast will include Mitesh Soni, known to Tara audiences for performances in Macbeth and Paradise of the Assassins, Beruce Khan who performed in Tara’s co-production with the National Theatre, The Black Album, Rez Kempton, recently seen in Little Revolution at the Almeida and Shireen Farkhoy, who has appeared at the Arcola as part of the Dare to Dream short play evening. The cast is completed by Nigel Hastings, who recently won plaudits for his performance in And then come the Nightjars.

Everyman is one of the earliest printed plays, originally written in Middle English and first performed around 1510. It is a morality play, popular … END_OF_DOCUMENT_TOKEN_TO_BE_REPLACED

After being closed for over two years due to covid, the Arcola Theatre has re-opened with Barney Norris’s love song to the people who raised him, We … END_OF_DOCUMENT_TOKEN_TO_BE_REPLACED

Now in its 15th year, La Clique have firmly established their place on the world burlesque circuit and this year’s London cast bring their infamous … END_OF_DOCUMENT_TOKEN_TO_BE_REPLACED

Warm, funny and lacerating, Satinder Kaur Chohan’s new play opens with a fly-on-the-wall look at the daily attempts women make to be accepted and … END_OF_DOCUMENT_TOKEN_TO_BE_REPLACED