Home » Reviews » Review of Contactless at the Hen and Chickens Theatre 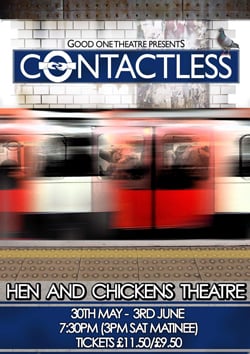 If you live in or visit London, the chances are you will have at some point used the Underground, or Tube. I could go on here and tell you lots of interesting facts about the tube but will resist, even though it is a fascinating network. Instead, I will tell you about a new show called Contactless which is currently at the Hen & Chickens Theatre.

Contactless written by Tom Hartwell, is all about the Tube. From the first accidental recording of the famous ‘Mind the Gap’ voice to the daily worries of Tube travel, Contactless covers them all. The performance really covers three individual stories, interspersed with a series of sketches. So, we have the story of Susan (Jeryl Burgess), wife of the ‘Mind the Gap’ voice (Adam Elliot) who has worked at Embankment for over thirty years but is now facing massive changes with a new regime closing the ticket offices and a new Station Manager (Stanton Cambridge) to contend with. Over at City Hall, the union rep (Hanna Jay) is fighting not only Boris and his minions, but the lascivious advances of management team letch Terry (Will Hartley) in order to secure her members demands and bring an end to the drivers’ strikes. Whilst, all this is happening, an enthusiastic voice-over artist (Rosie Edwards) is updating the announcements, including the iconic ‘Mind the Gap’. As these three stories progress, they are interspersed by short sketches of tube life: The announcements station announcers would love to make. The horrible etiquette of sitting in a priority seat when a lady who may be pregnant gets on. The daily fun of making up stories about one’s fellow commuters, especially those that share our journey on a regular basis. Virtually anything you can think of that may happen on the Tube is covered in this show, even the horrific embarrassment that gentleman can sometimes suffer in a crowded carriage is here.

I have no idea if writer Tom Hartwell has some sort of connection with London Underground. Given the way the organisation is portrayed, I sort of hope not. And I really hope that the negotiations between management and unions really didn’t go the way they were shown. And yet, there is something very believable in the writing – undoubtedly stretched to an extreme, but leaving the audience feeling it’s not entirely a work of fiction. A scary thought indeed.

The cast work extremely hard in flitting on and off the stage and, under the direction of Phil Croft, the small sketches breaking up the major stories really works well. Whilst all the actors were really good, I did end up with a favourite and that was Jeryl playing Susan. My heart really went out to her the first time she heard the new ‘Mind the Gap’ and there was a real lump in my throat as she stood there listening to the voice of progress. Without giving too much away, I absolutely loved it. Susan embraced that progress for her own ends. Fantastic work by Jeryl throughout. One of the best sketches was the awkward date between the Tube driver and young commuter which really tickled my funny bone somehow, even with the, to my mind, rather unnecessary waiter.

On the whole, the entire production worked well. I think it could have been a bit longer but I’m just selfish sometimes. Not every sketch got a massive laugh but I think at times everyone recognised something that had happened to them or they had thought of on those long journeys through the various tunnels. Overall, a funny and moving theatrical experience.

Contactless is the new comedy drama that explores life underground, inspired by true stories from the origins of ‘Mind The Gap’ to the etiquette of the priority seat. We all have somewhere to go, we all have to avoid eye contact
CONTACTLESS

It’s a show of its time. Well, it isn’t really – it’s a show first produced in the 1950s, with this production placing the action in 1913. The set … END_OF_DOCUMENT_TOKEN_TO_BE_REPLACED

The whole narrative in Lift is almost totally implausible, at least to me, until the penny dropped about two-thirds of the way through. The central … END_OF_DOCUMENT_TOKEN_TO_BE_REPLACED

“Three Decembers is the finest modern opera that I have seen.” So wrote Chicago reviewer Tom Williams, having seen its premiere in 2008, and I can do … END_OF_DOCUMENT_TOKEN_TO_BE_REPLACED

There’s a surrealness to Mission that the production’s own script readily acknowledges, with more than one character admitting, separately, that they … END_OF_DOCUMENT_TOKEN_TO_BE_REPLACED

In June 1988, Bob Dylan set off on what has become known as “The Never-Ending Tour” and apart from a break due to the pandemic, it’s still going 34 … END_OF_DOCUMENT_TOKEN_TO_BE_REPLACED