Home » Reviews » Review of Damn Yankees at the Landor Theatre 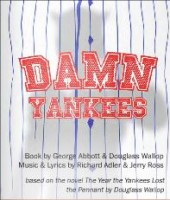 Damn Yankees at the Landor Theatre is certainly a delightful show. With excellently written musical numbers from Richard Adler and Jerry Ross, great direction by Robert McWhir, and casting by Benjamin Newsome, this production of the original hit Broadway musical is not one to be missed.

I must admit I was worried as to how this show could work in such an intimate venue; however my original doubts were soon forgotten due to the stunning choreography by Robbie O’Reilly. Everything we love about old-fashioned musicals certainly came through in this show.

Alex Lodge is the perfect leading man with one of the most stunning voices to be heard in London. He delivers the show beautifully, and you instantly fall in love with him. In complete contrast to his character of Joe Hardy is the hilariously devilish Mr Applegate played by Jonathan D Ellis. Ellis has the audience in absolute hysterics, he not only has wicked charm, but also just the right amount of humour and audience rapport to have the audience actually enjoy being in the company of someone from the underworld! His show-stopping “Those were the good old days” in Act 2 was certainly the highlight of the show for me, with reprises galore and theatre-world “in-jokes”, this number had some of us crying with laughter!

Poppy Tierney is excellent in the role of sultry Lola and is just as funny as Ellis, together with beautiful dancing skills to make many of us green with envy. She also does a very convincing Spanish accent whilst posing and kicking her way around the stage!

The male ensemble in this show are a pure delight to watch. They perform some extremely challenging dance routines in a very small space (and small towels!) and all stand out in their own rights and deserve just as much credit as the leading roles. Tony Stansfield leads the first outstanding ensemble number “Heart” in Act 1, and this is one of many “wow” points in the show.

The female ensemble also deserve a mention, with some wonderful dancing and comedy moments. The show would certainly be missing something special without them.

There was also a special video montage to show Damn Yankees’ support for the Motor Neurone Disease Association. This was a lovely moment, which showed footage of Lou Gehrig, who was diagnosed with MND after playing for the New York Yankees for 16 years.

Michael Webborn leads a very talented trio of musicians who form the show’s band. For the space this is just the right amount of instrumentation.

If you like baseball, cheesy song and dance routines, and have a wicked sense of humour, this production is definitely worth a watch.

Harold Shipman, known to his many patients, family and friends as ‘Fred’, was Britain’s worst serial killer. The official inquiry into his crimes … END_OF_DOCUMENT_TOKEN_TO_BE_REPLACED

Being one of Arthur Miller’s best-made and most challenging plays, The Crucible is also one of his most frequently performed. I was going to say … END_OF_DOCUMENT_TOKEN_TO_BE_REPLACED

To be fair, Linda Lavin called her concert Love Notes, there’s an album of the same name, and that’s more or less what it was about - variations on … END_OF_DOCUMENT_TOKEN_TO_BE_REPLACED

Noughts & Crosses is a euphemism for blacks and whites. The Noughts are the whites and the Crosses are the blacks. In the world of the play, the … END_OF_DOCUMENT_TOKEN_TO_BE_REPLACED

This ‘juke box’ musical offers highly polished, undemanding, feel-good entertainment, showcasing, as it does, 30 songs dating from the 1960s to the … END_OF_DOCUMENT_TOKEN_TO_BE_REPLACED