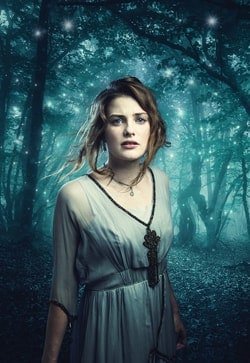 It’s almost always a bold move to present a relatively rarely performed work. Dear Brutus imagines, as far as I could deduce, some sort of parallel universe in the form of a wood (that is, an area of woodland) that only appears on Midsummer’s Eve. The show’s characters enter, undergo varying levels of transformation, and when they return to the real world, see themselves and one another as they have never done before. It’s absurd as it sounds, and it’s one of those shows best enjoyed by simply doing one’s best to go along with proceedings. After all, isn’t theatre ‘make believe’ as it is?

J M Barrie’s script contains an unusual amount of description, with some very specific background details with regard to the characters. It’s worth a read to gain some additional insight into the play. To an extent, it’s regrettable that this is so, as a comprehensive understanding of the play should, ideally, be evident just by watching the production. Anyway, why is it, for example, that Mr Coade (James Woolley) insists on going out of his way to provide a footrest for Mrs Coade (Josie Kidd) whenever she sits down, despite having no walking impediment or leg pain? What does Lady Caroline Laney (Helen Bradbury) hope to achieve by deliberately mispronouncing her r’s as w’s?

The costumes are commensurate with the era being portrayed, as is the on-stage furniture. But I struggled with this production at times, particularly in watching and listening to someone in the wood counting to 100. The dialogue between Margaret (Venice van Someren) and Will Dearth (Miles Richardson) was too repetitive for my liking, though it produced a mildly amusing comic effect. The best humour is reserved for a love triangle given prominence in all of the show’s three acts, between John Purdie (Edward Sayer, a young talent who could well have a long and successful career judging by his compelling performance here), Mabel (Bathsheba Piepe) and Joanna (Charlotte Brimble).

They really don’t write plays like this anymore, with extensive but nonetheless accessible vocabulary and putdowns spoken with finesse. Some interesting set design decisions correlate well with the story: a decent effort to create ‘the wood’ does not result in a later clear-up when the play returns to the house of Lob (Robin Hooper). In a proverbial sense, what happened to the characters in the wood stays with them long after they have left it. Simon Rhodes as Matey, butler to Lob, has remarkable timing and stage presence.

Performed ‘in-the- rectangle’ (as opposed to ‘in-the-round’), there are moments when characters are speaking from opposite ends of the stage, such that much of the audience is watching a conversation as though the stage were a tennis court. Overall, the show was performed with great aplomb, but in the end, the idea of getting a second chance is just pure fantasy: life is never a dress rehearsal, as you know. Still, fans and followers of Barrie’s works will find much pleasure in this well-directed production.

1917. In a remote English village there are rumours of an enchanted wood. One of the inhabitants – a mysterious old man – invites eight strangers to stay. They all have something in common. When, one evening, the wood miraculously appears the guests feel compelled to enter. What happens there has the power to change their lives forever…

From J. M. Barrie, the celebrated writer of Peter Pan, The Admirable Crichton and Quality Street, comes this haunting drama of self-revelation. Darkly comic, and presented in a sumptuous production for the play’s centenary year, Dear Brutus is Barrie at his most magical.

Directed by Jonathan O’Boyle (Sense of an Ending – Time Out Critics’ Choice) and produced by Troupe, who return to Southwark Playhouse after their critically acclaimed production of The Cardinal (The Telegraph Critics’ Choice).

One of London’s finest secret venues, the Crazy Coqs Cabaret & Bar at the stunning Brasserie Zedel is the perfect venue for the opening night of … END_OF_DOCUMENT_TOKEN_TO_BE_REPLACED

Stacey Solo (Tamar Broadbent) may well be an all-American criminal investigator, though the sense of irony and sarcasm is often inherently British. … END_OF_DOCUMENT_TOKEN_TO_BE_REPLACED

Just reading Janie Dee’s entry in Wikipedia is exhausting! This multi-talented artiste has achieved so much and her return to Cabaret at The … END_OF_DOCUMENT_TOKEN_TO_BE_REPLACED

From the moment we cross into the circle of caravans leading up to the big top we are transported into a different world. A lighter world of frolic, … END_OF_DOCUMENT_TOKEN_TO_BE_REPLACED

Postponed, as many productions were, due to public health restrictions, Stigma is a deeply personal story spanning much of Luis Amália’s life (or at … END_OF_DOCUMENT_TOKEN_TO_BE_REPLACED