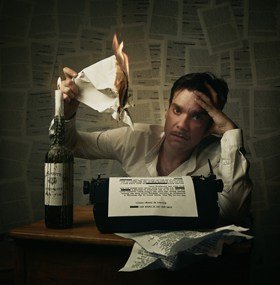 I went to see PIT Theatre’s Down and Out in Paris & London largely out of curiosity; I’ve never been able to get past the Parisian portion of the seminal George Orwell work and I wanted to learn if I could find something more in a stage adaptation. I wasn’t disappointed. Ingeniously, this production weaves a contemporary account of poverty in London, ‘Hard Work’ by Polly Toynbee, into its structure so that, seamlessly, the two experiences align to show just how little has changed for the poor in the interim years. In their empathetic humanity and horror, both narrators engage in an unflinching look at the financial burden that still keeps us from being an equal society.

I couldn’t have hoped for a more ideal theatre experience. In my estimation this production offered everything that a skilled and deeply considered production should; it had integrity and talent by the bucket load, aiming and succeeding to highlight a fundamental truth of the human experience. Crucially, it doesn’t just retell a story but intelligently interprets it, unapologetically pointing out its pertinence to our times, irrepressibly turning the audience into Corbyn-ite zealots.

In essence a lesson, the two approaches blended together neither patronise the people they observe nor give any illusory answers as to how society might change the imbalance that suppresses the poor. Instead, through creative, Brechtian stage craft the production purely demonstrates the utter quandary of the poor; the hell of waiting for a Job Centre interview is inflicted on the audience through a skilled fast motion sequence, the boredom of a life without money in Paris through slow-motion agony, the sincerity of both writers through direct address to the audience. The frustrated life of a Paris plongeur sits neatly next to the anger of a journalist just told that the predatory Brighthouse will end up charging her more than £800 for a single bed, because she can’t pay for it up front. This theatrical craft is used intelligently but not overstated and results in a thoroughly engaging watch.

The talent on stage abounds, especially in the lead Richard Delaney as George Orwell, who, with a sonorous voice, a convivial rapport with his audience and an excellent portrayal of a man of the time, conveys the era even more astutely than the intelligent set. Karen Ascoe as Polly Toynbee is urgent as the perfect modern advocate for the hopeless. Both deliver their experience of living as the poor while acknowledging that this is just a window, that they, alone amongst their companions, have an escape route.

The direction by David Byrne is also outstanding; through a cast of just six he conveys the devastating and exhausting chaos of poverty. Moments of comedy are not rare either, and these throw into stark contrast the terrifying times of abject despair. Perhaps the most telling moment of hopelessness is the examination of how utter depletion in energy takes away any hope of creativity; both writers only produce their work when they have removed themselves from their financial shackles, Orwell to his rich relations and Toynbee to her partner in the home she left. One is left wondering how many Orwells are languishing in the social housing of today, wasting their time and their talent on fighting the bureaucratic struggle our society has made out of living.

This production is important, now more than ever, as we look at a potential for change in our political system against the backdrop of decreasing social mobility. I would urge people to see it, in its refreshing honesty, because in its pure content and heartfelt form this is a unique piece of theatre that stands as a testament to, and a warning within, our times.

From the acclaimed PIT Theatre, the first incarnation of this timely and hilarious theatrical mash-up of George Orwell’s celebrated memoir with Polly Toynbee’s 2003 study of life in extreme poverty, Hard Work, proved to be one of the hits of the 2015 Edinburgh Festival Fringe.

Now, PIT Theatre, the multi-award winning in-house company at New Diorama Theatre, are proud to present the full-length version of their adaptation for the first time in London.

Switching between a young Eric Blair in 1930s Paris and Polly Toynbee in the early 21st century, Down & Out… is a fast-paced, witty human story which also resonates strongly through modern London’s climate of soaring living costs and limited opportunities for advancement.

It is 2002 – another Royal Jubilee year, and HRH (Mary Roscoe) is due to open a new Science wing in a 'sink' comprehensive where Dr Derek Jones … END_OF_DOCUMENT_TOKEN_TO_BE_REPLACED

Dr Anna LaRosa (Dr Stefania Licari) has a lot to say. Just as well, as she’s the only one on stage in this medical comedy, which largely draws its … END_OF_DOCUMENT_TOKEN_TO_BE_REPLACED

Nikhil Parmar’s one-man show, originally written as a TV pilot, manages to touch on a wide range of themes from Islamophobia to modern fatherhood with … END_OF_DOCUMENT_TOKEN_TO_BE_REPLACED

Handel’s 1738 opera Serse (or Xerxes) is an exploration of power, love and human frailty. King Serse falls in love with the voice of his brother … END_OF_DOCUMENT_TOKEN_TO_BE_REPLACED

Lea Salonga has her fans. She also has some superfans, the ones who yell, “I love you Lea!” at almost every opportunity. If that wasn’t enough, there … END_OF_DOCUMENT_TOKEN_TO_BE_REPLACED