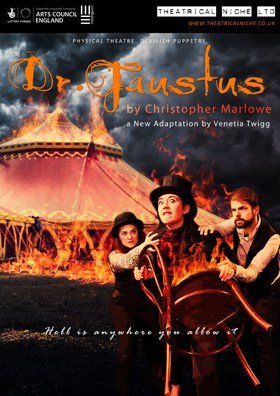 Christopher Marlowe’s Dr Faustus deals with greed, blind ambition, and the pursuit of ultimate power through knowledge, whatever the cost. Dr Faustus, a scholar, grows dissatisfied with traditional learning, so seeks new knowledge through black magic. Faustus summons Mephistopheles, servant to the Devil, and makes a pact with him: Mephistopheles will do Faustus’ bidding for for 24 years, after which time, the devil gets Faustus’ soul.

With multiple incarnations of the play vying for audiences this year, the adaptation by Theatrical Niche playing at Leicester Square’s Above the Arts Theatre, and around the country, makes its mark in two major ways. The first: by staging the play in a circus ring. This setting is aptly chosen by director Venetia Twigg – the circus is an arena of skill, but its acts are often grotesque. Faustus’ servant Wagner (Matthew Springett) becomes a circus master, and the good and bad angels are a clown (Alice Sillett) and an acrobat (Rayo Patel). That the only truly ‘good’ figure comes in the form of a clown shows how futile the heavenly argument is against Faustus’ thirst for knowledge and power – after all, who would listen to a clown – a figure of ridicule?

The second standout element of Twigg’s interpretation is that Dr Faustus is played by a woman – Charlotte Watson, who brings immense energy to the role. A female Faustus gave another dimension to her relationship with Mephistopheles, the Devil’s representative. In one scene, Faustus and Mephistopheles are initially locked in a strong embrace, which then turns into a snarling attack. Movement director Sheri Sadd’s choreography here highlights the perverse nature of their relationship – it resembled a controlling scene of domestic violence in which one partner is hopelessly ensnared to the other.

In addition to playing Wagner, Matthew Springett took on the role of Mephistopheles. Springett’s physical theatre background is evident: his characterisation of the schizophrenic, gollum-like Mephistopheles with his manic laughter and twisting limbs was highly effective and impressive. The remaining company members – Alice Sillett and Rayo Patel, played a succession of roles – including the Pope and a German empress, showing their versatility.

Twigg’s re-imagining of Dr Faustus uses puppets to depict the creatures from hell, increasing the nightmarish, surreal quality of the performance. But what was perhaps most effective in unnerving the audience was the use of UV lights to illuminate secretly painted faces of the devils and demons on stage. As the play unfolded, Faustus’ face and body became covered with secret ink, showing her descent into darkness.

The production could have benefitted from a little more light and shade – it felt at times like the actors were shouting, and a quieter, menacing tone would have been more effective. But while this adaptation of Dr Faustus does not have the benefit of a celebrity, nor the panache of the RSC, it’s a brave version by a company unafraid to try new things.

Greatness. Is there any price too high? Exquisite Puppetry, Physical Theatre and Circus Artistry throw petrol over the flames of Marlowe’s hellish pride tale and the battle for one circus leader’s soul.
In a world pulsing with vanity and expectation, what happens when the greatest loved icon runs out of clever ideas? Under the straining tent poles of the world’s most famous circus, Dr. Faustus employs the one show tactic not yet undertaken to achieve glory – black magic.

Devilish neon puppets wander the stage in this visceral and physical re-imagining, whilst the fast-paced backbone of modern dialogue rockets the classic B text into full technicolour for today’s audience.Acclaimed Director / Movement Director team Venetia Twigg and Sheri Sadd lead this visceral and physical production, exploring Grotowski’s “Poor Theatre” in the creation of an electrifying circus of the body. In this new exploration of Marlowe’s classically Christian tale, Sin is for all creeds and Hell is wherever you allow it.

Everyman is one of the earliest printed plays, originally written in Middle English and first performed around 1510. It is a morality play, popular … END_OF_DOCUMENT_TOKEN_TO_BE_REPLACED

After being closed for over two years due to covid, the Arcola Theatre has re-opened with Barney Norris’s love song to the people who raised him, We … END_OF_DOCUMENT_TOKEN_TO_BE_REPLACED

Now in its 15th year, La Clique have firmly established their place on the world burlesque circuit and this year’s London cast bring their infamous … END_OF_DOCUMENT_TOKEN_TO_BE_REPLACED

Warm, funny and lacerating, Satinder Kaur Chohan’s new play opens with a fly-on-the-wall look at the daily attempts women make to be accepted and … END_OF_DOCUMENT_TOKEN_TO_BE_REPLACED