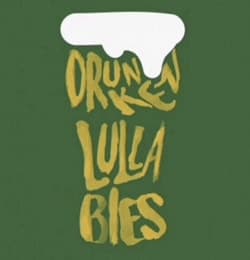 The veteran Irish theatre performer Colm Wilkinson has many anecdotes from an illustrious career, one of which involved a discussion he had with someone about the setlist for one of his solo shows. He wanted to include an Irish drinking song, to which his acquaintance replied, with a puzzled look, “What other kinds of Irish songs are there?” Here, in Drunken Lullabies, Cathal J. Ferris (as himself) goes through almost every conceivable emotion possible, from the euphoria of securing his first professional acting role, to the anger and frustration of being a victim of crime. But somewhere out there, there may well be an Irishman who doesn’t drink to excess. Not this time though.

I’m still not sure where the ‘lullabies’ come into the narrative, which asserts that Ferris is the sort of person who is not here for a long time (necessarily), but for a good time. The plot isn’t completely all about being a Confident Young Man – in fact, there are occasions when Ferris finds the urge to ‘give up on himself’, as he puts it, overwhelming. Some of what Ferris talks about is somewhat relatable even to those who don’t work in the entertainment industry. Okay, so a job interview for a head office position is hardly the same as an audition process for a West End ensemble role, but the process of seeking employment, whether an actor or an accountant, is often a messy and uncertain one.

While a play like Noises Off considers what goes on when a production is already in progress, this drama about drama is much broader in scope. Ferris does well to impersonate a number of other characters, particularly the teachers that put him through his paces in training. His experiences, whether proverbially painting the town red with his peers, or being a failed auditionee on one of those Saturday night glorified karaoke contests (you know the ones I mean), are told with detail and conviction. The rapport with the audience is perfect, even when if performance was not – partly down to a missed cue, handled by Ferris with great aplomb, or the odd jumbled line, which I must hasten to add was always very quickly corrected.

There are some intriguing insights into the theatre industry, and for anyone who wants a glimpse into what it is to be an actor in London these days, this is a show that provides plenty of candid honesty through a no-holds-barred and engaging approach. My personal favourite story of the evening is probably the one about Ferris and the group of friends he was with being stranded in Amsterdam at some point in 2010, because of an international curtailment of flights as a result of volcanic ash from Eyjafjallajökull, Iceland. Let’s just say mischief ensues.

Later on, the play does end abruptly, though this does have the benefit of not venturing into soppy sentimentality, having established deep and meaningful takeaway thoughts on not giving up and putting in the hard work in order to reap the benefits later on. All things considered, it’s quite an inspirational story and one which will hopefully inspire its audiences to continue to put the effort in and pursue their dreams – whatever these may be. Ferris’ former teacher’s advice to “fight the fear and find the fun” has certainly been followed in this production, gripping and hilarious in equal measure.

Sixpenny Productions return to Camden with the Hilarious Rollercoaster ride that is Drunken Lullabies. This
Stage Debut at The Camden Peoples Theatre sees Cathal J. Ferris reprise his autobiographical role as an
emerging actor and all the drunken stories that come with it.

This one man show leads the audience on a journey through the highs and lows of Cathal’s personal and
professional life featuring vivid characters and outrageous tales that will leave in a fit of giggles.
Drunken Lullabies was written by Cathal J. Ferris in 2015 and has gone from strength to strength originally a
one night performance at The Tristan Bates Theatre to touring Belfast, London and Northampton.