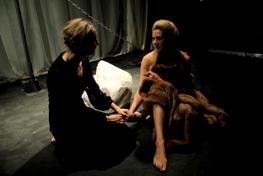 The New Diorama Theatre is a small but perfectly formed performance space in NW1. Seating just 80 people, it gives the intimacy of a virtual home cinema, providing a feeling of genuine connection to the characters as they play out before you.

Natalie York gives a cold and detached view of the corrupt and violent events that are the tale of The Duchess of Malfi. The scenery is stark and has an ‘Escher’ like surreal quality. Faceless lackeys chant in the background, over an electro horror soundtrack giving the darker scenes a nightmarish quality. But it is not all cold. The story is a tragedy, and has as many warm and loving characters to care about as there are ruthless and controlling manipulators to despise.

The cast is strong and diverse. Lucy Laing as the titular character is both strong and sexy, taking the character from wealthy widow to vulnerable victim. The play begins with the Duchess in control of her life, defying her greedy controlling brothers by choosing a second husband from a lower class, for love and loyalty – pursuing happiness with a secret marriage and family. With devoted waiting- woman Cariola (Marie Fortune)to assist their deception, there is a genuine tenderness felt in this household and a smouldering chemistry with Callum Cameron’s gentle Antonio.

In contrast, and to disrupt this perfect picture, twin brother Ferdinand (Tom Blyth) a foppish fool, collaborates with his brother, the shady Cardinal (Matthew Leigh) to gain control of their sister’s life and fortune by any means necessary. Their story takes a darker path and degenerates into incestuous and murderous ways. Their hired spy and henchman Bosola, discovers the secret family and assists in dispersing and dispatching them. Stephen MacNeice gives this assassin heart. A complex but basically remorseful character, Bosala eventually learns to question his commands but the fatal deeds he has executed ultimately lead to his own end.

Special mention must go to Tom Blyth, whose transformation from over-protective brother to frenzied sufferer of lycanthropy, complete with ticks and jerks and delirious animal like characteristics, gave empathy to even this most unscrupulous character as his own actions drove him to be a wild and broken man.

This macabre Jacobean tragedy by John Webster, illustrates the struggle of a woman striving for independence and happiness regardless of status and class; which is still relevant today. The Pell Mell Theatre Company doesn’t shy away from the subject matter, with a disturbing and raw portrayal of love, lust and madness with a body count worth of today’s action movies. An excellent, deliciously dark production.

The Duchess of Malfi
“Whether we fall by ambition, blood or lust, Like diamonds we are cut with our own dust”

The palaces of Italy are choked with corruption in Webster’s vicious tragedy of madness, love and politics. As the widowed Duchess of Malfi searches for a new husband her eye falls fatally on her servant Antonio. Determined to pursue her desires at any cost she marries in secret believing that her fiercely proud family will, in time, understand.

But secrets do not last long in the court of Malfi where a new allegiance is forged each day and any confidence can be broken for a price. As the lies unravel and the marriage comes to light the Duchess’ brothers, incensed by their sister’s disobedience, plan a horrific revenge, destroying the very family whose honour they were blindly attempting to save.

Handel’s 1738 opera Serse (or Xerxes) is an exploration of power, love and human frailty. King Serse falls in love with the voice of his brother … END_OF_DOCUMENT_TOKEN_TO_BE_REPLACED

Lea Salonga has her fans. She also has some superfans, the ones who yell, “I love you Lea!” at almost every opportunity. If that wasn’t enough, there … END_OF_DOCUMENT_TOKEN_TO_BE_REPLACED

I have no hesitation in saying that the 1952 movie “Singin’ in the Rain” and its 1985 stage version is one of the greatest musicals of all time, … END_OF_DOCUMENT_TOKEN_TO_BE_REPLACED

There are, Maria Caruso was keen to emphasise in a post-show discussion, no wrong answers when it comes to responding to Metamorphosis or even … END_OF_DOCUMENT_TOKEN_TO_BE_REPLACED

Children of the Windrush generation, sisters Dawn and Marcia, grew up in the 1980s. In Roy Williams’ new play Dawn is shown struggling to care for … END_OF_DOCUMENT_TOKEN_TO_BE_REPLACED