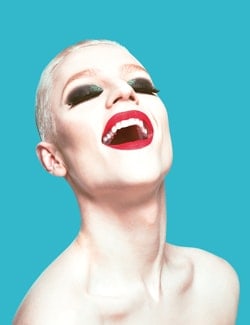 “Well, that was different,” was the exit poll verdict of a fellow theatregoer as we filed out of the Apollo Theatre on Shaftesbury Avenue. There are aspects of familiarity within Everybody’s Talking About Jamie, however. For instance, this wouldn’t be the first time a musical has, through its storyline, encouraged its audiences to be true to themselves and have the courage to express their personalities and individualities to the fullest extent, without being overly concerned about what other people may or may not be thinking.

When a pair of stilettos is given to 16-year-old Jamie New (an astonishingly brilliant John McCrea) for his birthday, I could almost hear Lola from Kinky Boots over at the Adelphi Theatre loudly stating, “It has to be… RED!” Here, though, the backstory is performed rather than described, and there’s more manual pushing and pulling of tables, chairs and other pieces of set than the West End is used to. It’s never distracting, however, allowing the show to breathe in the scene changes, thanks to some inventive lighting (Lucy Carter), and driving beats played by a ten-piece band, ably led by Theo Jamieson.

Having had the privilege of seeing the show in its previous incarnation at the Crucible Theatre in Sheffield (where a line from Jamie about schoolwork being so boring that he’d rather be watching the snooker had the audience in cahoots), it’s looking slicker and has a even stronger emotional impact in this West End transfer. Videos and projections (Luke Halls), for the most part, provide extra sparkle, and at least a couple more songs have been added to the list of musical numbers.

For all the razzle-dazzle of the excitement created by Jamie’s ambition and his drive to pursue the fulfilment of his dreams, it’s his mother Margaret (Josie Walker) that is just as endearing as her offspring. Perhaps the most poignant musical number of the evening is ‘He’s My Boy’, a statement of unconditional love that puts the problems of parenting into perspective. Ray (Mina Anwar) is the ever-supportive friend to Margaret (and thus Jamie), and a running gag about special offers from what is already a discount supermarket never fails to amuse.

The show is contemporary with a capital C, on several counts. The music (Dan Gillespie Sells) often has a driving beat, a pleasurable pop music sound which, in live performance, is easy on the listening ear. Margaret’s unstinting encouragement of Jamie is a joy to see, the attitude of Jamie’s Dad (Ken Christiansen) unpalatable but nonetheless realistic – not for nothing does the character not have a proper name – and the banter between students at Jamie’s school certainly seems authentic.

Further, concerns have been raised in certain quarters, with some justification, about the lack of diversity on stage. Everybody’s Talking About Jamie gives Pritti Pasha (Lucie Shorthouse), who is, in the character’s own words, “a Muslim with a Hindu first name”, lead vocals on a musical number in the first half, a solo with a reprise in the second, and plenty of spoken dialogue in both. Considerable time is given to highlighting the struggles of various characters, including Miss Hedge (Tamsin Carroll), who I assumed to be Head of Year, who must balance demands from various parts of the school community, and Hugh Battersby (a likeable Phil Nicol), whose career in the entertainment industry had as many lows as highs. What this adds up to is a show whose main characters are all more than sufficiently developed.

The choreography (Kate Prince) demonstrates superbly the vigour and vitality of youth, and the confident swagger of the likes of Dean Paxton (Luke Baker) is conveyed consistently compellingly. Hilarious and hard-hitting in equal measure, this is a great British musical not to be missed. I don’t like this show. I love it.

Supported by his brilliant loving mum and surrounded by his friends, Jamie overcomes prejudice, beats the bullies and steps out of the darkness, into the spotlight. This fearless, funny, fabulous brand new musical sensation hits London with catchy new songs by lead singer-songwriter of The Feeling Dan Gillespie Sells and writer Tom MacRae. Sixteen: the edge of possibility. Time to make your dreams come true.

Supported by his brilliant loving mum and surrounded by his friends, Jamie overcomes prejudice, beats the bullies and steps out of the darkness, into the spotlight. This fearless, funny, fabulous brand new musical sensation hits London with catchy new songs by lead singer-songwriter of The Feeling Dan Gillespie Sells and writer Tom MacRae. Sixteen: the edge of possibility. Time to make your dreams come true.

This entertaining new musical is very fortunate in having as its leading lady the terrific Katie Elin-Salt: she is onstage almost throughout, singing … END_OF_DOCUMENT_TOKEN_TO_BE_REPLACED

“Keep it shallow, keep it pretty, keep it moving,” declares Justin Vivian Bond, letting the audience determine for themselves what precisely is really … END_OF_DOCUMENT_TOKEN_TO_BE_REPLACED

This play didn’t do that well on Broadway the first time around in 1963, and did worse the second time around, even with a revised script, running in … END_OF_DOCUMENT_TOKEN_TO_BE_REPLACED

One of the very few good things about the COVID pandemic is that the opportunities to live stream theatre performances have increased exponentially, … END_OF_DOCUMENT_TOKEN_TO_BE_REPLACED