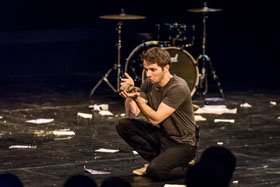 Hamlet without an interval? To quote another of the Bard’s plays, King Lear, “O, that way madness lies,” a phrase, that in this powerful and intense adaptation from Flute Theatre, proves in the end to be rather more apt than I could ever have envisaged. Hamlet, Who’s There? shines through in the plethora of Bard plays and Bard adaptations touring the country (and, in this case, four others as well) as part of #Shakespeare400. So much is stripped away that there is neither Rosencrantz nor Guildernstern nor Horatio. Except there is, sort of, but I won’t give too much away. Polonius (Steven Beard) is either relieved or deprived, depending on your point of view, of those long, unwieldy ramblings where he uses far more words than is necessary.

And why not? After all, Hamlet is rarely performed in its actual entirety, not least because there is some debate amongst those whose job it is to care about such matters as to what precisely the entirety of Shakespeare’s Hamlet strictly is: various scholars differ as to whether a properly ‘full’ Hamlet would take four or five hours to perform. Either way, most ‘straight’ productions will at the very least excise the odd scene here and there. This adaptation is almost ruthless, but it works. It’s not minimalist, partly because it isn’t afraid to depart from the original text, while retaining more than enough familiarity with the said original. The audience is not left thinking, “That’s not how the story goes!” regardless of how radical the differences become. And it’s partly because this tight cast of just six are so thoroughly engaging, both individually and collectively, and provide intriguing alternative interpretations of such well-known characters.

I must reassure purists that this is all far from disastrous – quite the opposite. This production is the best Hamlet, adapted or not, I have come across to date (I have even seen a rock musical adaptation), and is certainly far better, both dramaturgically and in its casting quality, than the famed ‘Hamlet at the Barbican’ in 2015. All five soliloquies spoken by Hamlet (an utterly mesmerising Mark Quartley) are retained. Those familiar with the story will be able to work out which scenes are excised completely and which are combined, while those coming across the story for the first time need not read up about it beforehand. It is accessible Shakespeare at its finest.

Again and again I found myself impressed at quite how this show manages to keep so much of the main story with such few cast and such little set. While it is a fast-paced production, it is never rattles through too quickly, with scene changes so incredibly smooth and unobtrusive. The whole play flows beautifully.

Quartley’s Hamlet is sometimes still, sometimes running about frantically, and devoid of the various minor characters that may or may not have influenced his mind and behaviour, he is left both vulnerable and on his own. The exploration of his mental state is deep and vivid.

Finlay Cormack plays a more mature and subtle Laertes than I have seen elsewhere – and proves, for reasons I will not reveal here, a highly skilled drummer – though even in this adaptation he still refuses to play the pipe for Hamlet, having “not the skill”. Tom Mannion’s Claudius is profoundly more considerate than threatening, but nonetheless a credible antagonist. Gertrude (Kelly Hunter) and Ophelia (Francesca Zoutewelle) become magnified roles, perhaps because there are so few characters in total; it would seem that cutting them out of the plot was a step too far even for this production.

There’s nothing out of place in this charismatic and energetic show, which turned out to be an incredible experience from start to finish. I sincerely hope this isn’t the last time this production is performed on British shores; this fresh and vibrant tour-de-force spectacle truly deserves to be seen by a much wider audience. An absolute triumph.

At the heart of Hamlet is the unfathomable grief and questionable sanity of a young man. Even his closest family are unable to help him as he drifts away from them, revealing a perfect storm of tragedy. Our story unfolds over one night, in one house, on the evening of Hamlet’s mother’s wedding; by dawn only a grave-digger is left alive.

Hamlet, alone in his bedroom, is possessed by the tortured ghost of his father, rising from his own disturbed consciousness. Grief is transferred from person to person, spreading like poison through the family, and demonstrating how trauma can have wide-reaching consequences. We seek to rip open the wound at the heart of the play and explore Shakespeare’s opening question: who’s there?

“Flute’s brilliantly-observed, tersely contemporary Hamlet works on its audiences with visceral force. It is both compassionate and withering: an intense distillation of tragedy which makes the best-known play in world drama new for another generation.” Michael Dobson – Director, Shakespeare Institute.

Harold Shipman, known to his many patients, family and friends as ‘Fred’, was Britain’s worst serial killer. The official inquiry into his crimes … END_OF_DOCUMENT_TOKEN_TO_BE_REPLACED

Being one of Arthur Miller’s best-made and most challenging plays, The Crucible is also one of his most frequently performed. I was going to say … END_OF_DOCUMENT_TOKEN_TO_BE_REPLACED

To be fair, Linda Lavin called her concert Love Notes, there’s an album of the same name, and that’s more or less what it was about - variations on … END_OF_DOCUMENT_TOKEN_TO_BE_REPLACED

Noughts & Crosses is a euphemism for blacks and whites. The Noughts are the whites and the Crosses are the blacks. In the world of the play, the … END_OF_DOCUMENT_TOKEN_TO_BE_REPLACED

This ‘juke box’ musical offers highly polished, undemanding, feel-good entertainment, showcasing, as it does, 30 songs dating from the 1960s to the … END_OF_DOCUMENT_TOKEN_TO_BE_REPLACED