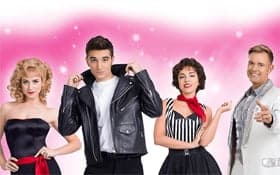 Grease was not originally conceived as a “Jukebox musical” when it first appeared on Broadway in 1972. The storyline was enhanced by the songs but not subordinate to them – classic Musical Theatre in fact. However, the success of the 1978 movie, which added to and subtracted from the original musical score, has made it now much more of a showcase for familiar pop classics and at Wimbledon Theatre the audience singalong started during the overture! We are in ‘Mamma Mia!’ territory here with the emphasis on pure entertainment rather than storyline – nothing wrong with that, of course, we all need cheering up!

In 1972 Grease was looking back with wry amusement at the 1950s from a more knowing age. The 60s social revolution made us, or so we thought, more sophisticated and cool and whilst they were not quite a generation apart the two eras were indeed very different. But there is a case that the mid-1950s were actually more revolutionary – that was when Rock started and Elvis shocked our parents rather more than the Beatles or even the Rolling Stones later did. Elvis arrived in 1955, the year in which “Grease” is set, and there are clear references in style and dress and in the music to the King of Rock and Roll.

Grease is not a “sung-through” musical which means that the dialogue tells the story with the songs popping out of the jukebox sometimes with a measure of logic to the drama, but mostly fairly gratuitously. In this new production (Directed by David Gilmore) the original plot is followed but the dialogue is not allowed to intrude too much into the music. There are around eighteen numbers, including reprises, with some from the movie which were not in the original stage show (notably “Grease” and “You’re the one that I want”) and a couple which were not in the film only the stage show. The dialogue is limited but what there is is just about enough to tell the story – such as it is! It is a pastiche of 1950s rock of course – that is Grease’s original intent and the story is a skeleton on which to fix the music.

Given the nature of the production, we should concentrate on reviewing the song and dance more than the acting – which is fortunate as the brief patches of dialogue are pretty woefully done. The singing and the dancing is lively and the energy levels are mostly high throughout. There is little charm and less wit though – but if you’re singing along or (at times) standing up in your seat to dance you’re unlikely to mourn the absence of Stanislavski. Two characters were well developed – Darren Day was excellent – his “Beauty School Dropout” as Teen Angel was first rate and he also acted the part of the seedy DJ “Vince Fontaine” with satirical skill. The other star was Tom Senior whose “Greased Lighting” was the show stopper of the evening. Danielle Hope as Olivia Newton-John (sorry, as “Sandy”) gave a neat consummately professional performance. On this showing, Tom Parker is miscast as Danny. He wasn’t John Travolta (few are – so that’s too high a hurdle) but at this very first public performance of the show, he struggled in the part at a rather more modest level of expectation. His acting seemed to lack confidence, his singing struggled for range and his dancing was a bit stiff. Overall he looked as if he needs to loosen up a bit and feel more comfortable on the stage.

The staging was excellent, the choreography very good and the band – positioned above at the rear of the stage under Griff Johnson’s musical direction – were truly excellent. The production is playing in twenty-six venues up to the end of the year so this is a major enterprise in every way. The fame of Grease – mainly created by the movie of course – should ensure packed houses along the way. In the programme there is honesty about the intent of the show “Grease doesn’t have a message…what [it] is really about is having fun…” . Fair enough, as I say it should cheer you up and get even the most aged feet a-tapping. Final thought. If Danny and Sandy wander into the production somewhere give them a seat and make room for their Zimmer frames – they’ve both just had their 80th birthdays!

Dust off your leather jackets, pull on your bobby-socks and take a trip to a simpler time as Danny and Sandy fall in love all over again.

It’s the original high-school musical, featuring all the unforgettable songs from the hit movie including You’re The One That I Want, Grease Is The Word, Summer Nights, Hopelessly Devoted To You, Sandy, Greased Lightnin’ and many more.

So throw your mittens around your kittens and hand-jive the night away with the show that’ll make you want to stand up and shout, ‘A-wop-bop-a-loo-bop, a-wop-bam-boom!’

This entertaining new musical is very fortunate in having as its leading lady the terrific Katie Elin-Salt: she is onstage almost throughout, singing … END_OF_DOCUMENT_TOKEN_TO_BE_REPLACED

“Keep it shallow, keep it pretty, keep it moving,” declares Justin Vivian Bond, letting the audience determine for themselves what precisely is really … END_OF_DOCUMENT_TOKEN_TO_BE_REPLACED

This play didn’t do that well on Broadway the first time around in 1963, and did worse the second time around, even with a revised script, running in … END_OF_DOCUMENT_TOKEN_TO_BE_REPLACED

One of the very few good things about the COVID pandemic is that the opportunities to live stream theatre performances have increased exponentially, … END_OF_DOCUMENT_TOKEN_TO_BE_REPLACED