Home » Plays » Review of Hamlet at the Harold Pinter Theatre 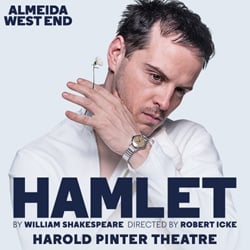 What a non-traditional but traditional, unconventional but conventional, rendering of Shakespeare’s Hamlet this is. The inventive use of video technology in this production, a West End limited season transfer from the Almeida Theatre, seems to take after the 2009 BBC Television adaptation (starring David Tennant and Sir Patrick Stewart) of a previous Royal Shakespeare Company production. This production goes a lot further, though, with subtitles and captions of rolling news broadcasts displayed in Danish. Or at least one would hope they are in Danish. Elsewhere, appearances on screen of the Ghost (David Rintoul) – closed circuit television, to be precise – fit in like a glove to the 17th-century dialogue of the opening and subsequent scenes. And this production keeps the technology in use, right to the very end. Even the fencing in Act V Scene II is filmed.

Certain asides to the audience from Polonius (Peter Wright) are spoken instead to a hidden microphone, adding yet more subtlety to an already relatively quiet production in terms of volume from the stage. It is some time before Hamlet (Andrew Scott, retaining his natural Irish accent in the title role as Prince of Denmark) raises his voice at anyone. Not that he couldn’t be heard, but it was so different from the usual borderline over-projection that characterises proscenium arch West End performances of Shakespeare plays. Once I had become accustomed to this more reserved approach, I warmed to it.

It’s proof that one need not have booming vocals to put in a tour de force performance. The staging is not all that imposing, either – the modern security protocols in place at this twenty-first century Elsinore don’t seem far removed from current arrangements at places of interest in London at this time of heightened security. Ophelia (a convincing Jessica Brown Findlay), came across, unusually (for me) as having genuinely lost her mental stability in Act IV Scene V (the ‘mad scene’). The devil is in the detail, and some of the subtler mannerisms might possibly be lost to people not sat in the first few rows.

But then, perhaps not. Cameras are in use (focusing in on the actors, not the audience, please don’t fret) with screens at several different angles (the creatives have certainly considered the various audience slightlines – hurrah!), so almost everyone gets to see the ‘right’ expression at the relevant moment. Is it a bit too long with an almost four-hour running time? It didn’t feel like it. Indeed, most of the people around me were clock-watching (well, wristwatch-watching), longing for the second interval to finish, such was the level of interest.

The position of the first interval in the play, in terms of when exactly it happens in the script, is inventive – clever, even. Polonius (Peter Wight) speaks lines into a wire tap that would in almost any other production of Hamlet be spoken to the audience. The chemistry between Claudius (Angus Wright) and Gertrude (Juliet Stevenson) is palpable. The main soliloquies of the title character remain intact, ever sublime and immortal, but not exactly untouched – Scott’s compelling delivery makes these familiar words sound remarkably vibrant. The ‘Yorick speech’ is particularly poignant.

These sofas, these business suits, these sliding doors. It’s all bound to annoy the purists to high heaven. No matter. This is a surprisingly warm and inviting production, and a welcome addition to the many versions of this timeless play. I suspect this production will be a talking point among followers of Shakespearean productions for years to come.

Starring BAFTA and Olivier Award winner Andrew Scott (Sherlock, Birdland, Cock, Pride) as the Danish Prince, Juliet Stevenson* as Gertrude and Jessica Brown Findlay as Ophelia, Hamlet is brought to the stage by the critically acclaimed and multi-award winning creative team behind 1984 and Oresteia.

Robert Icke ‘one of the most important forces in today’s theatre’ (The Observer) previously directed Mary Stuart, Uncle Vanya, Oresteia, Mr Burns and 1984 for the Almeida Theatre.

Hamlet is produced by ATG (Sunday In The Park With George, Buried Child, Oresteia) Sonia Friedman Productions and the Almeida Theatre (Chimerica, Ghosts, King Charles III, 1984, Oresteia) who are renowned for introducing groundbreaking, critically acclaimed transfers to the West End.

* Juliet Stevenson for the first four weeks only. Further casting for Gertrude to be announced.

Titus Andronicus is not usually a comedy, it is usually a bloody, villainous and vengeful tale, but tonight it is a comedy and a rather amusing one at … END_OF_DOCUMENT_TOKEN_TO_BE_REPLACED

This show is not without clichés - there are three of note in this production. Firstly, the French horn of the show’s title is personified, speaking … END_OF_DOCUMENT_TOKEN_TO_BE_REPLACED

There’s very little in the way of set in this show: aside from chairs, a few crash barriers and at one point, a red carpet, the actors’ movements … END_OF_DOCUMENT_TOKEN_TO_BE_REPLACED

South African born, but raised on the Isle of Man, Pierre Novellie is a true raconteur rather than just another 'stand-up' comedian. He says about his … END_OF_DOCUMENT_TOKEN_TO_BE_REPLACED

This show, Willy Hudson began by saying, is about himself. It is written by himself, is directed by himself and executive produced by himself. Almost … END_OF_DOCUMENT_TOKEN_TO_BE_REPLACED