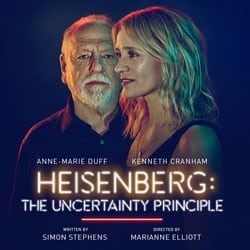 A short review of a short play. The clue’s in the title, Heisenberg: The Uncertainty Principle. It’s about uncertainty, funnily enough, so perhaps it is no surprise that this play is a tad unwieldy. It’s not quite all over the shop, but it’s not as grounded as it could be either. It is, however, in the end, a bit predictable. This two-hander looks at the unlikely relationship (‘relationship’ being the operative word) between Alex Priest (Kenneth Cranham) and Georgie Burns (Anne-Marie Duff). Priest is a butcher, while Burns is uncertain (geddit?) as to what she is, at least initially.

As the play repeatedly reminds the audience, Priest is 75 years of age, Burns considerably younger. This isn’t so much a scientific discussion as a romantic comedy, and anyone who doesn’t already know what the said uncertainty principle attributed to Werner Heisenberg (1901-1976) is, must turn to an interview with a ‘clinical scientist’ in the show’s programme. While the scene changes were hugely atmospheric for some, some of the movements were very much open to interpretation. Why exactly were the walls literally closing in on Burns? One or two scene changes were glacially slow, making the play feel much slower than it really was. The lighting, however, was excellent, matching shades and moods with precision.

The humour is admirable, for the most part. I rather liked a list of musical styles that Priest has listened to over the years, an eclectic mix encompassing, amongst other genres, country and western and dubstep (whatever the latter may be). But there’s a need to exercise suspension of disbelief here: the pair meet in unlikely circumstances, and Burns almost relentlessly pursues Priest to the point that he asks quite legitimate and valid questions as to her real motives. She is, at least, pleasant – this is hardly Fatal Attraction. His guardedness and watchful, suspicious eye does make the character credible, and he doesn’t recklessly plunge into the relationship without some due diligence.

The two actors, considering what they’ve been given to work with, punch far above their weight. The focus is very much on their performances – the set is uncluttered and props are minimal. Cranham’s Priest convincingly reminisces about his past, and it’s little wonder that Duff’s Burns craves more of his stories. I struggled to care for the pair beyond wanting to know how the story would pan out, however, and it was pleasing that not every loose end was tidily knotted before the curtain call.

While it is difficult to believe much that goes on in Heisenberg: The Uncertainty Principle, it is satisfyingly amusing, and far more approachable and accessible than the show’s title would suggest.

In this uncertain world, who can predict what brings people together? When two strangers meet by chance amidst the bustle of a crowded London train station, their lives are changed forever. A surprising and life-affirming new play starring Anne-Marie Duff and Kenneth Cranham.

“A soaring, suspenseful, thrilling and wondrous play. Heisenberg resonates in your mind long after it’s over” – Ben Brantley in The New York Times

Performance Times
Monday to Saturday 8.00pm and matinees Thursday and Saturday at 3.00pm

People are like swans. Hopefully, that’s got your attention and while you may be questioning my statement, it is true.  We all have a surface that we … END_OF_DOCUMENT_TOKEN_TO_BE_REPLACED

In case anyone in the audience didn’t know what a toilet looks like, a neon sign reading ‘Toilets’ hangs in between, well, two toilets. There probably … END_OF_DOCUMENT_TOKEN_TO_BE_REPLACED

Dolly Parton’s musical 9 to 5 sets out to do one thing: ENTERTAIN, and it does this superbly. The show has just started an extended tour at Wimbledon … END_OF_DOCUMENT_TOKEN_TO_BE_REPLACED

I feel so comfortable here in this large airy Church, seating is socially distanced and face mask compliance is at a level that some large West End … END_OF_DOCUMENT_TOKEN_TO_BE_REPLACED