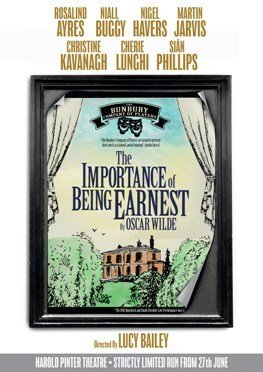 When it comes to Oscar Wilde and The Importance of Being Earnest, I will confess I am a novice. I knew nothing of the plot, only that it was a comedy, by contrast my companion was a hardcore fan and could quote every line. For me this play revealed itself accordingly but for my comrade there were a few surprises.

Director Lucy Bailey and Designer William Dudley have joined forces to create a reimagining of Oscar Wilde’s classic comedy. Taking artistic licence with the plot, Lucy Bailey’s production is set in the present day, introducing the audience to a fictitious band of amateur actors, the Bunbury Players, during their final rehearsal of The Importance of Being Earnest.

With an all-star cast you are guaranteed a spectacular show, each character as well defined and full of wit as the next. In Oscar Wilde’s story, the majority of the characters are twenty-something’s cavorting in misadventures and subterfuge. Interestingly a number of the cast are reprising their roles some ten to thirty years later, most notably Nigel Havers and Martin Jarvis who first performed the roles of Algernon Moncrieff and John Worthing in 1982 at The National Theatre.

As any hardcore Oscar Wilde fan will tell you, as they did me, The Importance of Being Earnest is nothing without ‘a handbag’ quote thrown in and whilst this much loved play delivers on everything a classicist would expect, it is the unexpected that brings a fresh perspective to this time-honoured play. The insertion of the Bunbury Players allowed the actors to ham-up some of the best loved moments with an ‘in joke’ and a familiarity of scene which could be played on to great effect. The production was incredibly funny and acted superbly by some of Britain’s finest actors. It was quick of pace and tongue, thoroughly enjoyable and still relevant in today’s society.

Harold Shipman, known to his many patients, family and friends as ‘Fred’, was Britain’s worst serial killer. The official inquiry into his crimes … END_OF_DOCUMENT_TOKEN_TO_BE_REPLACED

Being one of Arthur Miller’s best-made and most challenging plays, The Crucible is also one of his most frequently performed. I was going to say … END_OF_DOCUMENT_TOKEN_TO_BE_REPLACED

To be fair, Linda Lavin called her concert Love Notes, there’s an album of the same name, and that’s more or less what it was about - variations on … END_OF_DOCUMENT_TOKEN_TO_BE_REPLACED

Noughts & Crosses is a euphemism for blacks and whites. The Noughts are the whites and the Crosses are the blacks. In the world of the play, the … END_OF_DOCUMENT_TOKEN_TO_BE_REPLACED

This ‘juke box’ musical offers highly polished, undemanding, feel-good entertainment, showcasing, as it does, 30 songs dating from the 1960s to the … END_OF_DOCUMENT_TOKEN_TO_BE_REPLACED