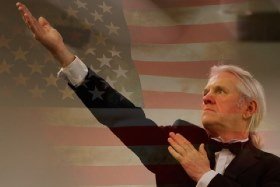 Oh, the modern world. Oh, these modern times. Forgive the hint of resignation, but common consensus is that this is the age where satirists have found themselves unexpectedly floundering at their own keyboards, struggling to tap out a work that is a step or two ahead of the absurd pantomime of the political arena.

It is into this contemporary climate that Rhiannon Brace has injected a topical piece of physical theatre focusing on the plethora of dubiously sexist outbursts emitted from the mouth of the incumbent US President Donald Trump. The flagrantly lascivious, often derogatory, and always ill-advised comments are widely documented tabloid fodder. Brace embraces the controversy and adds her own amped-up and puffed-up take on the revelations in Inauguration.

Opening with a silent female performer twisting and turning to the winsome female a capella vocals singing the US National anthem, the starting point is the titular inauguration itself. The silent performance evokes comparison with the affecting closing moments of Rebekah del Rio’s rendition of ‘Llorando’ in David Lynch’s Mullholland Dr and is in itself an effective opening salvo.

A sarcastic, defiant soundtrack then throws out ‘American Woman’, ‘My Way’, ‘You Can’t Always Get What You Want’ and ‘Wild Thing’, where the zeal in which the cast commit to their performances cannot be questioned. Stomping, posing and preening upon the stage with a gaggle of cohorts, Trump and Co are presented as some sort iniquitous, shady political rat pack or the dastardly mob. Brace plays the Pres in suggestive clothing and a rubbery mask. It’s all very quirky; and intentionally so. The gung-ho physicality is certainly something to admire. It just doesn’t prompt as much thought as it would like. It is a fast-moving, whistle-stop mini-compendium of provocative language portrayed through an extended dance sequence, but it cannot hide the fact that there is very little here apart from a spectacular picaresque gallery of the distasteful.

The artistic community is striving to lampoon this bizarre era where the absurd is the new norm. How do you beat that? Rhiannon Brace’s Inauguration opts for the surreal approach. Unfortunately, no matter how ingenuous her attempts occasionally are (including the recurring hand-over-mouth gesture to ‘silence’ the women, particularly during the slow dance number); the target is too soft, well-documented and obvious.

Perhaps it is too of its time. If this were constructed, say, twenty, thirty or more years from now, audiences would be incensed and startled afresh; taken off-guard, as time and distance had stretched out and had enabled the deplorable reality of Trump’s words be without the baggage of omnipresent media citation and the caricature of his coiffured mop.

Inauguration is intended to conjure conjecture and debate but, in the end, it is a slight work with little that is new or groundbreaking to say.

EverAfter, A mixed up fairy tale at the Chickenshed Theatre, is a great Christmas show. As the title suggests, this is a concoction of stories. The … END_OF_DOCUMENT_TOKEN_TO_BE_REPLACED

The thing about Panto is not to over-think it. It’s about having fun and surrendering to the Christmas spirit. Like Christmas crackers, there is a … END_OF_DOCUMENT_TOKEN_TO_BE_REPLACED

Anyone who's worked in investment banking knows it's largely an intellectually-free zone, polluted with people who calculate each other's value … END_OF_DOCUMENT_TOKEN_TO_BE_REPLACED

By the production’s own admission, the version of events as detailed in Bonny & Read is unlikely to equate to an exactly full and fair account of … END_OF_DOCUMENT_TOKEN_TO_BE_REPLACED