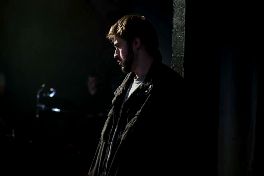 Writing a review of a new musical is meant to be easy. Just say how pretty the girls and/or boys were, how much you loved the big number at the end of the first act and how you cried when the boy got the girl or a variation thereof and the show finished with a huge song and jazz hands sequence before the curtain came down. Piece of cake. Except The Homefront isn’t a traditional musical in any sense. True, there are shaking hands during some of the songs but these have less to do with a love of jazz and more to do with fear, cold, alcoholism and a love of heroin.

You know you are in for something different when you walk in The Union Theatre’s auditorium and it feels like you’re back outside under one of the many arches that take the railway travelling world into London. There are three bundles: Men? Women? Who knows? On the dusty floor surrounded by the detritus of their lives on the streets – cardboard boxes, a sleeping bag, a jacket, etc. The lights go down and we meet our guides through the world of the homeless. They don’t give their names, though later we learn one for certain, but we get to know them and their stories very fast.

We have The Young One (Josh Maddison) who has only been on the streets for a few weeks and still has his humanity, or naivety depending on your point of view. Then there is, for want of a better term, The Street-Wise One (Alasdair James) who has seen it all in his months of homelessness and takes cynicism to new levels. Finally, there is The Old One (Bruno Loxton) an ex-member of the armed forces who has spent years living rough and has pretty much lost any hold on reality he ever had, as alcohol and the loss of his family have eaten away at him.

We get to see these three interact with each other and with the ordinary people that pass them by every day. The ones that ignore them, the ones that avoid them and the ones that think they are so much better than them. There is a wonderful scene where two students on a demo against the raising of tuition fees confront The Young One. They are probably all about the same age but, these are students, therefore they are better than the oik that dares to speak to them and needs to be put in his place. The interesting thing for me was that during the student demonstrations in 2010, I saw students having very similar conversations with people who “just didn’t understand them.”

Writer/Director/Musical Director John Kristian, is not only an amazingly talented playwright/composer but based this show on his own experience of being homeless. I would hope that in this day and age scenes such as those between The Old One and a vindictive policeman don’t occur, but I have this horrible feeling that they do and we, the lucky ones, just don’t want to know. The show avoided the temptation to be really preachy and depressing.

There are scenes which made me squirm, whether through horror, guilt or other emotion, and happy endings were in short supply but, the combination of superb writing and three actors with amazing stage presence made for a show that was sympathetic to the situations, realistic in their portrayal and thought provoking for the audience. Although all three actors were truly fantastic, I would like to single out Bruno Loxton who’s amazing singing voice was matched by his so realistic portrayal of an ex-serviceman fallen on hard times, which is not that rare (in 2008 it was estimated that 8% of London’s homeless were ex forces – so much for the Military covenant!).

This is not a show for the faint-hearted. The language used and situations portrayed aren’t necessarily going to be welcomed by everyone. It doesn’t set out to change the world. However, if a homeless person asks for “20p for a cup of coffee” as you come out of Starbucks with your Grande Cappuccino and Muffin, I really hope you will remember what you have seen. Hopefully you will hand over that little silver coin, wish them a good morning and just maybe “The Golden Age” will really begin.


The Union Theatre hosts The Homefront, opening on 6th August until 9th August. Tickets are £15 (concessions £10) and can be purchased from the Union Theatre Box Office at buy from the box office on 0207 261 9876, and also ticketsource from Friday 18th July.

John Kristian has recently built his reputation as a writer after two successful runs of his showcase Songs from the Playground, featuring extracts from his work including VOW, The Notebook (Concept), The Holiday (Concept), Home Alone (Concept), Hidden Talents and The Homefront. John is also co-founder of Fairground Theatre Company, a new company looking to develop the work of new British musical theatre writers. Fairground Theatre Company are a contemporary company founded by John Kristian & Kayleigh McKnight.

Everyman is one of the earliest printed plays, originally written in Middle English and first performed around 1510. It is a morality play, popular … END_OF_DOCUMENT_TOKEN_TO_BE_REPLACED

After being closed for over two years due to covid, the Arcola Theatre has re-opened with Barney Norris’s love song to the people who raised him, We … END_OF_DOCUMENT_TOKEN_TO_BE_REPLACED

Now in its 15th year, La Clique have firmly established their place on the world burlesque circuit and this year’s London cast bring their infamous … END_OF_DOCUMENT_TOKEN_TO_BE_REPLACED

Warm, funny and lacerating, Satinder Kaur Chohan’s new play opens with a fly-on-the-wall look at the daily attempts women make to be accepted and … END_OF_DOCUMENT_TOKEN_TO_BE_REPLACED