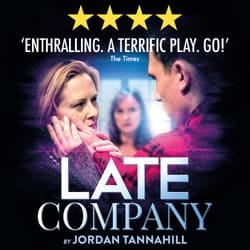 After its original run at The Finborough Theatre, Late Company transfers to Trafalgar Studios 2. Jordan Tannahill’s play about the aftermath and effects of teen suicide and cyber-bullying doesn’t hold back punches and delivers a piece with engaging tension and hurting at the forefront.

We meet Debora and Michael Shaun-Hastings, two parents awaiting company for dinner. They are nervous to sit down with Tamara, Bill and Curtis Dermot. Tamara and Bill are the parents of Curtis, and Curtis is considered a prime player in Debora and Michael’s son’s recent suicide. The characters have hopes to sit down with one another and attempt to get some closure or at least clarity on the situation. What ends up happening is an escalation of blame, secrets and upset that brings the audience in but also makes them scared to move.

Lucy Robinson plays Debora Shaun-Hastings and gives a stand out performance of a very frustrated and frustrating woman. Her pristine elegance can’t hide her nerves for the arrival of her dinner guests and her outbursts, later on, brings her anger to the surface. This mother is not ready to move on and Robinson’s performance captures Debora in all her complexity.

Playing opposite Robinson is Lisa Stevenson, who plays Curtis’ mother, Tamara. Her layered and realistic performance mirrors the many suburban mothers we all know. Their husbands, played by Todd Boyce and Alex Lowe take a supporting role in comparison to the mothers, but just as pivotal.

And David Leopold who plays Curtis gives a subdued but powerful performance. He plays his struggle quietly and is intimidated by Debora’s interrogation of him. The best parts of the play are Robinson’s and Leopold’s interactions. Intense and, well-directed and well-written.

The play starts a little slow but from the reading of the prepared letters, Tannahill takes us on a deep and dark debate on teen suicide, responsibility, depression and other big issues. Late Company covers many topics in depth in its 75 minutes than what other similar plays can do in their 180 minutes. Michael Yale’s direction is smart and Zara Mansouri’s design is elegant. It’s a perfect show for the Trafalgar space and could even expand to bigger theatres with the correct marketing.

Late Company doesn’t give many answers to the questions it asked, but it doesn’t have to. It just makes you think and have the conversation, which is what exactly helps prevent the serious situation of teen suicide.

A successful middle-class couple’s lives are irrevocably changed after their teenage son is mercilessly bullied for being gay. In an attempt to ‘move on’ they invite his chief tormentor, and his parents, to a dinner party.

Far from finding the peace they seek, the dinner strips bare their good intentions to reveal layers of parental, sexual and political hypocrisy.

Written with sensitivity and humour, Late Company is a tantalising hotbed of visceral tension.

Nikhil Parmar’s one-man show, originally written as a TV pilot, manages to touch on a wide range of themes from Islamophobia to modern fatherhood with … END_OF_DOCUMENT_TOKEN_TO_BE_REPLACED

Handel’s 1738 opera Serse (or Xerxes) is an exploration of power, love and human frailty. King Serse falls in love with the voice of his brother … END_OF_DOCUMENT_TOKEN_TO_BE_REPLACED

Lea Salonga has her fans. She also has some superfans, the ones who yell, “I love you Lea!” at almost every opportunity. If that wasn’t enough, there … END_OF_DOCUMENT_TOKEN_TO_BE_REPLACED

I have no hesitation in saying that the 1952 movie “Singin’ in the Rain” and its 1985 stage version is one of the greatest musicals of all time, … END_OF_DOCUMENT_TOKEN_TO_BE_REPLACED

There are, Maria Caruso was keen to emphasise in a post-show discussion, no wrong answers when it comes to responding to Metamorphosis or even … END_OF_DOCUMENT_TOKEN_TO_BE_REPLACED