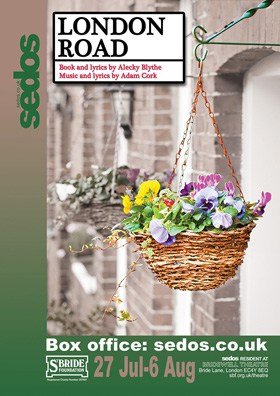 In December 2006 there were a series of murders of prostitutes in Ipswich. Five girls were brutally slain in the city and it became headline news for a while before disappearing from the media when Stephen Wright was arrested, charged and convicted.

Not the most obvious subject for a musical but in 2011 “London Road” written by Alecky Blythe and Adam Cork caused a sensation at the National. What made the show unique was that it was a “verbatim” musical i.e. Ms Blythe had gone to Ipswich and interviewed the local residents of London Road (where Stephen Wright had lived whilst carrying out the murders) and then transcribed the interviews precisely into the dialogue and lyrics of the show. So what you hear on stage are the transcribed interviews including the ums, erms, pauses and y’knows transformed into a rhythmic poetry that combined with some wonderfully melodic and occasionally atonal music, make for a whole that is greater than the sum of its parts. It’s a funny, moving, poignant and often disturbing piece that spotlights a small community of people living regular, often mundane lives when their world is turned upside down by the events going on just a few yards from their homes.

SEDOS are London’s leading amateur dramatic company who have had enormous success over the past few decades but this was a very brave project to take on as it’s not an easy, run of the mill musical by any means.

Director Matt Gould along with co-director Gayle Bryans have given us a splendid production at the Bridewell Theatre an old swimming pool in the middle of the City of London. They’ve taken a group of mainly untrained actors who include a solicitor, an HR administrator and a communications manager and turned them into an ensemble that if you hadn’t read the programme, you wouldn’t have known that they weren’t a group of sixteen professional actors at the top of their game.

The set is fairly simple but the superb use of projections onto the back wall takes us to a village hall, London Road itself, a local café and various gardens in the area. Combine this with a few tables and chairs and you’re immersed into the community who live in London Road.

The seven-piece band ably led by musical director Jordan Clark are excellent although occasionally a little loud and the lyrics were drowned out a couple of times. This may not be anything to do with the sound set-up but a problem with the acoustics at the Bridewell as this Victorian baths wasn’t expecting to house musicals when it was built!

It would be unfair to single anyone out for special praise as this truly is an ensemble piece so congratulations must go to everyone concerned both on and back stage. This is a real triumph for SEDOS and if last night’s full house is anything to go by, the fairly short run should be a great success.

In 2006 the everyday life of the town of Ipswich was shattered by the discovery of the bodies of five women.
The residents of London Road had struggled for years with the soliciting and kerb-crawling on their street. When Steve Wright, the occupant of number 79, was arrested, charged and then convicted of the murders, the community grappled with the media frenzy and what it meant to be at the epicentre of this tragedy.

Playwright Alecky Blythe recorded extensive interviews with the residents of London Road and turned them into an intelligent, startling and raw piece of theatre. Tony Award winner Adam Cork’s score uses the melodic and rhythmic speech patterns captured on those recordings to create this extraordinary work.

London Road is an experimental and challenging musical documentary which reveals the ways in which even the darkest experiences can inspire a community.

The descriptions of what happens in this show are so vivid that paradoxically they leave nothing to the imagination – and, at least at the performance … END_OF_DOCUMENT_TOKEN_TO_BE_REPLACED

As theatre productions go this is a memorable, magical experience filled with heart and love and so many tiny thoughtful details, that I’m not sure a … END_OF_DOCUMENT_TOKEN_TO_BE_REPLACED

There are no props at all in Dog, and yet despite a dog, Roy, being very much a key character, the staging and dialogue are more effective than they … END_OF_DOCUMENT_TOKEN_TO_BE_REPLACED

Be astonishing. That’s Derek Jarman’s exhortation to the world at large and - at the end of the show - to this particular audience. And in this … END_OF_DOCUMENT_TOKEN_TO_BE_REPLACED