Home » Reviews » Review of Medea, The Outcast at The Lion and Unicorn Theatre 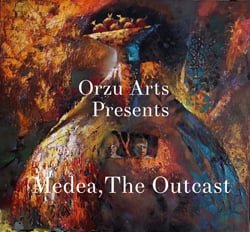 “Hell hath no fury like a woman scorned” is a phrase that embodies all that Euripides’ Medea stands for.

Cast out from Corinth following the news that her husband Jason intends to re-marry, she faces rejection, heartache and complete isolation. But as anyone familiar with the myth can tell you, Medea is not one to wallow and soon develops an all-consuming desire for revenge.

Medea, the Outcast is an adaptation which includes excerpts from both the original Euripidean text and subsequent works by Seneca and Heiner Mueller. Directed by Ovlyakuli Khodjhakuli, the piece is a one-woman show that has been concisely reduced without losing any of the depth present in the original text.

As a whole, Orzu Arts’ production is true to the essence of Medea. The set is simple but effective and the use of coloured chalk dust provides clear ties to Medea’s Colchian culture. In fact, it was quite reminiscent of the 1969 film adaptation directed by Pasolini. While the symbolism within the piece is quite clear, there are several confusing moments that arise from the movement elements of the piece.

For example, at times it is difficult to tell whether Medea is interacting with other characters that are physically present or whether these are instances of hysteria and hallucination.

In the title role is Sibylla Meienberg who brings an undeniable passion to the stage. In the ‘quieter’ moments of the script, during periods of revelation or scheming, her commitment to character is unwavering. Indeed, her identification and abject resolution that the children would provide optimal targets for her revenge gave me goosebumps!

Unfortunately, there are too many instances where emotions are heightened and the energy used is excessive. As Medea repeatedly throws herself to the ground she not only drowns out her own dialogue, but also pushes the performance dangerously close to melodrama. Likewise, many of Euripides key phrases are somewhat lost as they are screamed to the audience in a fit of rage. Certainly, this is a piece that demands a heightened sense of emotion, however, the number of instances where Medea completely ‘loses it’ could be reduced. This is certainly no reflection of skill, but rather a question of artistic choice and interpretation. Irrespective of this observation, in the quieter moments, Meienberg’s portrayal was bone-chillingly authentic and certainly did the iconic role justice.

The tale of Medea and her ill-fated affair with Jason of the Argonauts is one that has fascinated audiences for centuries. Orzu Arts’ production Medea, the Outcast provides yet another example of why this story continues to captivate audiences all these years later.

The setting is an abandoned and desolate border area. Medea, expelled, outcast and aggrieved stands at the gates of Creon’s palace. She awaits news of Jason, grinding her life and fate on the millstone of her memory.
She has lost everything except her painfully obsessive love. Caught between the past and the present, between reality, illusion and madness, she struggles to recall what has befallen her. Medea is overwhelmed by painful memories, tortured by excruciating and toxic passions, as well as feeling drawn ever closer to wicked deeds that terrify her.

She imagines all the impending horrors of exile, recoiling with dread at every possible decision and every possible outcome. In her mind’s eye, Medea looks into the face of each of her loved ones, she struggles in desperation to hold herself back from atrocious and irreversible crimes.

It is 2002 – another Royal Jubilee year, and HRH (Mary Roscoe) is due to open a new Science wing in a 'sink' comprehensive where Dr Derek Jones … END_OF_DOCUMENT_TOKEN_TO_BE_REPLACED

Dr Anna LaRosa (Dr Stefania Licari) has a lot to say. Just as well, as she’s the only one on stage in this medical comedy, which largely draws its … END_OF_DOCUMENT_TOKEN_TO_BE_REPLACED

Nikhil Parmar’s one-man show, originally written as a TV pilot, manages to touch on a wide range of themes from Islamophobia to modern fatherhood with … END_OF_DOCUMENT_TOKEN_TO_BE_REPLACED

Handel’s 1738 opera Serse (or Xerxes) is an exploration of power, love and human frailty. King Serse falls in love with the voice of his brother … END_OF_DOCUMENT_TOKEN_TO_BE_REPLACED

Lea Salonga has her fans. She also has some superfans, the ones who yell, “I love you Lea!” at almost every opportunity. If that wasn’t enough, there … END_OF_DOCUMENT_TOKEN_TO_BE_REPLACED