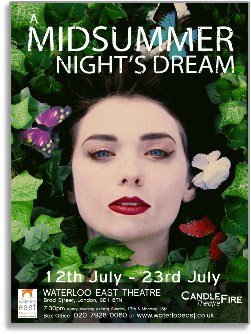 Ever think about your legacy, what you will leave behind when you eventually shuffle off this mortal coil? I sometimes wonder if anyone will read these reviews in the future – I often wonder if they get read at all if I’m honest. What I can safely guarantee is that it is highly unlikely that 400 years after my death, people will be sitting down to read my humble writings. This is not true of course of William Shakespeare who died in 1616 and is still as popular today as he was in his in own times. One of his most popular works is A Midsummer Night’s Dream which is having a run out at the Waterloo East Theatre.

Dream as it is sometimes called is a play consisting of three separate but intermingled stories. In the first, we are in Athens where Egeus (Caroline Short) has decided that she wishes her daughter Hermia (Marie Issermann) to marry the handsome Demetrius (Matthew Harrison-James). Unfortunately, Hermia is in love with the equally dashing Lysander (Robert Fellman) and also knows that her best friend Helena (Leah Lawry-Johns) is in love with Demetrius. Egeus will not be moved and so Hermia and lysander decide to run away and get married away from Athens. In a strange twist of logic, Helena believes that telling Demetrius of Hermia’s plans will help him fall in love with her. So, into the forest they all go.

Now, also in the forest are Oberon (Martin Sales) and Titania (Hollie Hales) respectively the king and queen of the fairies. The two of them have fallen out and proud Titania is refusing to have anything to do with Oberon. The king of the fairies is not happy with the situation and working with his familiar spirit, Puck (Joshua Jewkes) decides to teach her a lesson.

In another part of the forest, a group of workers are preparing a play to put before Egeus and her family. Led by Peter Quince (Charlotte Warner) the group comprising of Flute (Darren latham), Starveling (Lorna Read), Snout (Jon Adams) and the noisy, self promoting Bottom (David Gurney) who basically wants to play the lead and every other character in the play, much to the annoyance of the other players and especially Peter Quince.

Now all three groups are in the forest, the action happens at a fast pace with magic flowers, an ass’s head, shouting and lots of sleep all playing their part as everyone searches for their own happy ending.

In this life you can criticise your parents, the government, the Queen, even God. In fact, everyone can be criticised except for one person – William Shakespeare. Say something negative about one of his plays and the arts mafia will be down on you like the proverbial ton of bricks. But, I’m going to take that chance and admit that I really don’t like A Midsummer Night’s Dream. I’ve seen a few versions and never really enjoyed the story which is too complicated and at certain points – such as the performance of Pyramus and Thisbe – it feels as as if there have been bits added just to fill in the time. So, taking into account that I don’t like the play, let’s have a look at this production.

On the whole, this is a really good production that is full of fun and good natured humour that really comes across from the stage to the audience. Director Jaclyn Bradley keeps the story flowing from the moment the audience enter and see Flute and Quince playing gentle music as we took our seats until the final number sung by everyone. There were some really lovely touches in the production and I have to single out Martin Sales and Joshua Jewkes as Oberon and Puck respectively These two are a fantastic double act who not only work extremely well together but also manage to say so much without moving. This is particularly true during the big Lysander, Hermia, Demetrius, Helena confrontation where they end up sitting on the side of the stage watching the foursome sorting themselves out – quick congrats to Fight Director Stephen Bradley for his work on that scene. There was another part that really caught my eye, even though it was not really in the story and that was the gentle flirting between Darren Latham’s cheeky chappie Flute and Charlotte Warner’s jodphur wearing Quince. The two of them again looked really great together. The four lovers are great together and I loved the ‘peacocking’ – all bare chest and flexed – between Lysander and Demetrius which felt very natural as the two high spirited, handsome young men fight for the love of Hermia.

All in all then, A Midsummer Night’s Dream isn’t my favourite play, but I did enjoy this spirited version. The alterations made to the original story are subtle and work very well and the cast perform with gusto, all the time looking as if they are having a lot of fun and their enthusiasm really comes across making for a very enjoyable evening. Strange things happen in the woods.

When four young lovers, a troupe of actors and some roguish woodland fairies collide under the trees, three intertwining stories will fall under the spell of the forest.

An idyllic summer in the middle of a rural countryside village is the setting for a chaotic night of passionate mistakes as CandleFire return to Shakespeare with his bewitching tale of love and enchantment.