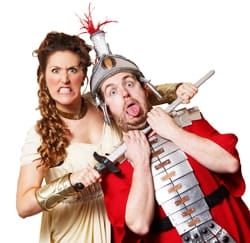 This bit by Claudee aged 10: Last week my Grandpa told me he would take me to see Gangsta Granny but in return, I would have to help him write a review. This seemed fair so I helped him do it. Then a few days later, he said he had tickets to see Horrible Histories which made me very excited as I love the television programmes and want to read the books. But he said you have to write another review. I didn’t expect this as I’d just done the other one but he muttered something about buses coming along in pairs which I didn’t understand but as he’s quite old, I pretended to and agreed to go to see the show and do the review so here it is:

Horrible Histories was at the Garrick Theatre in Charing Cross Road which is the same theatre that we saw Gangsta Granny in as this was a matinée which Grandpa says was a show in the afternoon – he said it’s from the French word for morning which doesn’t really make sense as this was in the afternoon! And the strange thing was that I even sat in exactly the same seat as last week but it was a good one and I didn’t have an adult with a big head sitting in front of me so I could see everything on stage.

I was a little surprised that there were only two people in the show but they had lots of costume changes pretending to be different characters from history and they ran around the stage lots. Like Gangsta Granny there were tons of poo and fart jokes – I suppose that’s what adults think children like and as we were all laughing (including the adults), they’re probably right. There were also jokes about fish guts, people being sick and a squashed dormouse which were all very funny. Also, the actors came into the audience and got a girl on stage and put her in the stocks. I wished they’d chosen me but maybe I was too small for them to see and she did get things thrown at her.

As this was about British history, they told us all about the Vikings, Shakespeare, Dick Turpin and cholera. They also had water pistols but I was too far away to get wet which I think was a good thing. All this reviewing stuff is making me tired so Grandpa is going to finish it but before I go I want to say that my favourite bit was when they were talking about cholera in Victorian times and the actress had to drink four glasses of water that came out of a pump but the actor made her laugh and she nearly had to spit it out! The next bit is by Grandpa aged a lot more than 10:

Although I’d never seen the TV programmes or read the books, I was aware of the existence of Horrible Histories and how they educated kids about history in a way they could enjoy. The show itself was subtitled: More Best Of Barmy Britain so apart from those noted by Claudee, there were sketches about Shakespeare, the Puritans and Charles II amongst others. Some of the early sketches were a little puerile but the kids lapped them up. The sketch about Dick Turpin was done a la The Only Way Is Essex which was clever and something anyone who’s seen the programme could relate to. Also, the cholera sketch was well put together although Laura Dalgleish who was billed in the programme as Queenie but played a number of parts, nearly choked on her water when Ashley Bowden (Rex) who also played a number of parts, ad-libbed an ironic joke about finally being on the West End stage but she managed not to spit it all out – although I’m sure the kids would have loved it if she had.

The final sketch was about World War I where Dalgleish in uniform and sporting a moustache played General Haig whilst Bowden was Lord Sugar in an “The Apprentice” spoof. For me this jarred a little with the levity of the rest of the show, talking about millions of men being euphemistically referred to as “lost” – I’m not sure all the kids would have got the horror of it.

Bowden and Dalgleish worked really well together changing costume and wigs at pace, running off and on stage, singing, dancing, rapping and so Claudee informs me “dabbing” (me neither – look it up). They’re an energetic, entertaining couple and seem to have genuine on-stage chemistry.

Horrible Histories is a clever and engaging way to get kids to learn some history without it being rammed down their throats and at just 70 minutes or so in length is a good way to spend an afternoon with the kids and grandkids.

We all want to meet people from history. The trouble is everyone is dead! So it’s time to prepare yourselves for a special production of Horrible Histories featuring MORE of your favourite characters from our barmy past – and a brand new scene with wordy Will!
Find out why the Romans were revolting! Could you survive the vicious Vikings? Can evil Elizabeth entertain England? Would you party with the Puritans? Clap along with crazy King Charles! Dare you stand and deliver to dastardly Dick Turpin? Vomit with the vile Victorians and prepare to do battle in the frightful First World War!
It’s history with the nasty bits left in!

How can a play be both charming and devastating? Through its tight script, abundant humour and pitch-perfect performances, 4th Country manages to … END_OF_DOCUMENT_TOKEN_TO_BE_REPLACED

Britain, so a London cab driver once told me, is obsessed with the Second World War, as though it happened just recently. Power Luncheon would seem, … END_OF_DOCUMENT_TOKEN_TO_BE_REPLACED

William J Dunleavy, author and star of this monologue play, is a writer and face to watch. He enters the room (as the staging is more geared towards … END_OF_DOCUMENT_TOKEN_TO_BE_REPLACED

Cirque du Soleil’s Luzia is a joyful whirl through a psychedelic Mexico, which reminds us why live theatre is so special. Anyone who goes to … END_OF_DOCUMENT_TOKEN_TO_BE_REPLACED