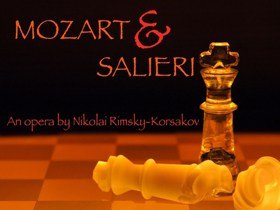 The challenge is an intriguing one: to come up with a 45 minute lunchtime divertissement in an intimate basement off Charing Cross Road that has a full-scale bar, framed poster-clad walls and an intimidating low ceiling. At first glance staging an opera might not look to be the best idea: in fact, Mozart and Salieri by Time Zone Theatre is a magnificent piece of entertainment that keeps the audience enthralled all the way to its very last note.

Nicolai Rimsky-Korsakov’s bijou opera is truly a little gem. With a libretto by Alexander Pushkin, based on his own short play of the same name, the piece is an intense and in-depth exploration of the mind and character of a murderer. Most of us know the Salieri story through Peter Shaffer’s play/film “Amadeus”, which was also inspired by the Pushkin work, and here we have a crime-thriller which is less whodunnit and more an encapsulated I’m-gonna-do-it set to suitably portentous music.

In some ways it seems odd that the romantic Rimsky-Korsakov should select these classical musicians as his subject and as Andrew Charity on piano bashes out some snatches of Mozart as an intro before segueing into the the first notes of the opera we may well think, as the first plonky, depressing, unforgiving chords permeate the bottles and glasses and leather-clad chairs, that this is as far removed from the genius-in-every-note perfection of Mozart as vinegar is to Chateauneuf du pape. Rimsky-Korsakov is no Mozart: then again no-one is. And as the dreary, dirge-like music develops to establish Salieri’s seriously sombre mood, and the plot unfolds, we begin to discern the composer’s perspective in presenting Salieri’s deep-seated psychosis: wracked by jealousy Salieri becomes entirely divorced from reality so that he feels that murder is the only way to free himself – and the rest of the musical world – from the mercurial musical magician, Mozart.

The clever staging of this production, by director Pamela Schermann, sees action taking place throughout the bar and amongst the audience. We may not have noticed Salieri (Nick Dwyer) seated on a bar stool sipping his brandy as the house-light fades and the action begins: but we are soon enveloped by Dwyer’s burnished bronze baritone as with furrowed brow and disapproving grimace he commences putting flesh on the bones of his jealousy, his resentment, his pure unadulterated spite for his nemesis Mozart. Dwyer gives good self-flagellation as he intones the rich, ominous notes of the increasingly dark side of his flawed personality. We can’t take our eyes off of this sinister Salieri and we dare not shift in our seats in case he fixes us with his menacing stare, drags us behind the bar and administers a brandy bottle to our fragile skull. Dwyer not only masters the low ceiling but he also masters the depth of Salieri’s malignant despair.

The entrance of Roger Paterson as Mozart half-way through the first act lightens the mood and the singing, with his contrasting softer tenor, though he was more difficult to pick up on occasion as the amongst-the-bar staging inevitably meant that the performers would have their backs to different parts of the audience at different times. Paterson sports a wash-and-go powdered wig which he treats like a hat, removing it and replacing it with the frequency of a Mozart semi-quaver. He’s playful and clever and quick-witted and unbridled – all the things that the tight-assed Salieri is not – and whilst calling Salieri his friend he treats him with a disdainfulness that he just doesn’t register himself, something that Paterson gets across nicely. At one point, in asking Salieri to comment on some new tune he has come up with, he empties his pockets of screwed up manuscripts before producing an eighteenth-century mobile phone on which he plays a very tinny version of the melody. Whilst opera purists might eschew this particular anachronistic time-warp it would have been right up Mozart’s street whilst the po-faced Salieri would have sniffily, though silently, disapproved. And in that, you have the essence of Rimsky-Korsakov’s opera.

Musical Director Charity, who also provided the effortlessly accessible, bitter-sweet English translation of Pushkin’s libretto, is tucked away in the corner on his piano which becomes part of the action when Mozart gives a demo of his fledgling requiem. In this tale of villainy and genius the mystery of who the black-clad stranger was who commissioned the work hangs over the final moments of the opera like a fateful, Damaclesian cloud though we begin to see, through Rimsky-Korsakov’s eyes, that Mozart’s requiem was not for his father, or for the prescient, soon-to-be-poisoned, Mozart himself: rather it is a requiem for the soul of Salieri.

Immersive lunchtime opera in the main bar of Phoenix Artist Club from 20th – 23rd April 2016. “Villainy and genius can never be compatible?“ asks Salieri, as he bids Mozart farewell. The opera follows the apocryphal legend that Antonio Salieri poisoned Wolfgang Amadeus Mozart out of jealousy over his talent. Russian composer Nikolai Rimsky-Korsakov (1844-1908) used the short play Mozart and Salieri by Alexander Pushkin as libretto for his opera, which also served Peter Shaffer as inspiration to his famous stage play and film Amadeus.

The lunchtime opera takes place at Phoenix Artist Club and will be accompanied by piano. Using the whole space as our stage, the action unfolds around the audience, making them the centre of the performance and allowing them to experience opera in an intimate setting.

“I’m excited to stage a revival of Rimsky-Korsakov’s opera at the Phoenix Artist Club. The nostalgic bar in the heart of the West End seems to be the perfect place for Salieri and Mozart to meet“, says Schermann, who previously directed this opera in Vienna in 2009. “The intimate space makes us witnesses, if not conspirators, of Salieri’s plan to poison Mozart. Partly character study, partly crime thriller, Rimsky-Korsakov’s masterpiece will captivate its audience“.

Titus Andronicus is not usually a comedy, it is usually a bloody, villainous and vengeful tale, but tonight it is a comedy and a rather amusing one at … END_OF_DOCUMENT_TOKEN_TO_BE_REPLACED

This show is not without clichés - there are three of note in this production. Firstly, the French horn of the show’s title is personified, speaking … END_OF_DOCUMENT_TOKEN_TO_BE_REPLACED

There’s very little in the way of set in this show: aside from chairs, a few crash barriers and at one point, a red carpet, the actors’ movements … END_OF_DOCUMENT_TOKEN_TO_BE_REPLACED

South African born, but raised on the Isle of Man, Pierre Novellie is a true raconteur rather than just another 'stand-up' comedian. He says about his … END_OF_DOCUMENT_TOKEN_TO_BE_REPLACED

This show, Willy Hudson began by saying, is about himself. It is written by himself, is directed by himself and executive produced by himself. Almost … END_OF_DOCUMENT_TOKEN_TO_BE_REPLACED