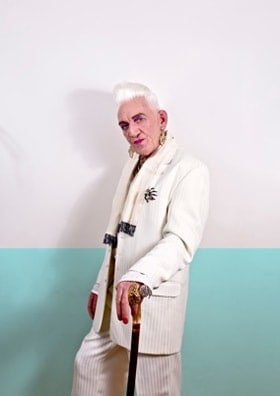 Think about the many plays out there that are about gay men. If I asked you to name any that were about men over the age of fifty, how many could you think of? Not many I bet. Well the good news is, that playwright Nathan Evans has added another to the list with his latest work Swansong which was recently presented as a staged reading as part of the Queer Festival at the King’s Head Theatre

In a very nice retirement home, Deputy Manager Craig (Alexis Gregory) is welcoming a new inmate, sorry, service user. Joan (Lavinia Co-op) is not the average person in the home. He is an unrepentant queer man in glossy lipstick and flamboyant clothing. Joan is a real trouper, a veteran of the days when homosexuality was illegal and at a Pride march the police outnumbered the marchers and joined along with the homophobic chanting of the local yobs. In some ways, for Joan, those days have never ended and he gets irritated by Craig’s settled married life, accusing him of heteronormativity as if he was involved in some dirty practices. The room next to Joan’s is inhabited by Jim (John Atterbury) a retired civil servant who believes he is only staying at the home temporarily until he finds a new job. So, there you have it, Craig, loving his job and wondering about his life and Jim, who enjoys a quiet life and is looking to the future. Can these two cope with the whirlwind that will enter their lives in the shape of Joan, feisty and always on the lookout for the next fight.

This was my first experience of a staged reading, and the first thing I have to say is that I never realised how much I want to be a director. This is something I’ve never thought of before and I’m putting it to the combination of excellent writing and a great cast that pulled me into the story so well. And it reflects the reality of life today for a lot of elderly gay men.

There has recently been an increase in interest in the lives of older gay people and especially those in supported housing and nursing homes, where a large percentage go back into the closet once they move in. I loved the fact that this was something that was never going to happen to Joan. To be honest, with Lavinia Co-op’s wonderful performance, there was never going to be a closet big enough for Joan to go into. Joan is a fascinating character. Today’s gay men have no real idea of the constant battles that Joan and his ilk fought for the next generation. The problem, I think for Joan, and people of his generation is that the fight for acceptance became all-consuming and now, they cannot relax enough to savour the fruits of their victories. For Joan, the Stonewall slogan of ‘so much achieved, so much more to do’ is his mantra and, as such when offered friendship and even love, he has trouble accepting it. Jim is as different to Joan as it is possible to be. Without giving away any spoilers, Jim has his own battles to fight and his ultimate friendship with Joan is a lovely step on the road to resolving them. Craig, ostensibly a happily married young gay man, seemed less sure of himself than Joan – to be fair, I think most people would be – and his admiration and exasperation for Joan really shone through wonderfully. As did his obvious love of his job and affection for Jim. But in the background, there was a sense that Craig actually envied Joan and his life. There was an interesting point when Craig told Joan – and I’m paraphrasing here – to relax, the war was won. A really interesting idea that many, both gay and heterosexual seem to believe.

The three actors brought their characters to life so well. John Atterbury as Jim was the epitome of a man of that age. When I first saw him, my mind went immediately to my grandfather, who until very late in life, always went about smartly dressed – if going out of the house then a tie and jacket were essential. In looks, bearing and talk, Jim was definitely a product of the same education and employment of so many men of his age. Alexis Gregory was a joy to watch as Craig. Alexis puts a lot into his face and, even when reading from a script, he still managed to give the audience Craig’s thoughts without necessarily saying anything. As for Lavinia Co-op, well he was perfect as Joan. In fact, it felt as if he had literally just walked off the street and into the show. Every movement was perfect and his vocal tones had that wonderful quality of adding so much to the written word so that nobody missed the meaning of what was being said.

The production itself was really well put on, with some extremely good and very moving effects used to highlight the story. I’m not ashamed to say that at the end of the show, there was not a dry eye anywhere along my row of seats. As the lights came up and the audience left, all the talk was of how marvelous Swansong had been. At the end, I felt emotionally drained and so wanted to get hold of the playtext and read it again.

As this was a staged reading, I’m not going to give any stars but I am really looking forward to seeing the finished production performed. Whenever it is, I confidently predict a crying audience, standing ovations, and excellent reviews for what is a really beautiful and emotional story with a strong message that comes straight from the heart.

On the fiftieth anniversary of the decriminalisation of homosexuality, Joan – a veteran of Gay Lib and no
stranger to conflict – dons battle dress with relish, seeking an ally in the young, gay but disappointingly
conventional care assistant Craig for his attempt to overturn the heteronormativity of the care system. Then, in
this most unlikely of settings, at this most unlikely time of life, Joan is offered love by Jim, another gentleman
resident. But can Joan bring himself to accept Jim’s proposal? Cue wedding bells…

Nathan says, ‘This a story that’s not been told: we’ve seen stories aplenty of young gay love and stories,
recently, about mature straight love, but gay love in the care home…? It’s about bloody time. This is also a story
that’s very now – reflecting changes in marriage legislation and our ageing population – among them some of
the men and women who began the fight for rights five decades back and are now facing further battles with
infirmity and isolation.’

There are usually, broadly speaking, two large demographics of patrons at a family show like The Wizard of Oz – children and their responsible … END_OF_DOCUMENT_TOKEN_TO_BE_REPLACED

This production makes excellent use of the available stage space - and, rather like the big musicals at Chichester Festival Theatre, has its cast … END_OF_DOCUMENT_TOKEN_TO_BE_REPLACED

This is an enjoyable and dynamic production of Henry V at the Sam Wanamaker Playhouse. Does it matter that there is innovative action and that it is … END_OF_DOCUMENT_TOKEN_TO_BE_REPLACED

With so many versions of A Christmas Carol doing the rounds (well, it is that time of year), it takes something pretty substantial to stand out from … END_OF_DOCUMENT_TOKEN_TO_BE_REPLACED