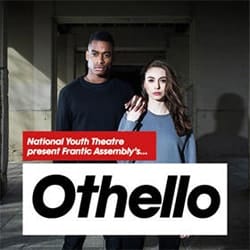 “I don’t like Shakespeare – I can’t understand it”; “it’s totally outdated and not relevant to modern day” and “it’s just not entertaining” – things I have heard over the years when I have said that I am going to see something from ‘the bard’. Sometimes, that is the case; sometimes the meaning is lost, the performance rambles, the costume attempts to be period but doesn’t hit the mark…there are a world of reasons to give it a miss.

But then, every so often, there is a reworking and a re-imagining that brings the 400-year-old dialogue to life. This is one of those times.

The story is well known – themes of love, betrayal, power, jealousy and revenge intertwine and lead to death, murder and suicide – a cheery night at the theatre then! The story is an adaptation of an earlier work by the Italian, Cinthio, which, itself, is believed to be based on a real event in Venice in the early 16th Century. The original text involves the Venetian Army who are sent to defend Cyprus against the invading Turks. It is easy to see how there could be an argument that the story is not relevant to the modern day.

However, this adaptation brings the text of “Othello” bang up to date. The Venetian Army is replaced by a gang who are based in the “Cyprus” – a seedy drinking hole. All of the action takes place either in the ‘Cyprus’ or in the streets outside. The costume is modern and, whilst the vast majority of the dialogue remains true to the original text, there are occasional modern ‘insertions’ that do not interrupt the flow, but maintain the overall feel
of the piece.

The production is staged by a cast of 16 young actors, all of whom inject enormous energy and strength into the production. This is truly an outstanding display of talent; if live theatre is going to be left in the hands of the younger generation, I would be hard-pressed to find a better bunch. Every single member of the cast gives an exceptionally strong performance, and it seems almost unfair to single any members of the cast out. However, there were some stand out performances. Curtis Kemlo as Roderigo brought simple comedy to the part and served to lighten the mood well when he was on stage. Eddie-Joe Robinson gave an assured and strong performance as Cassio – the drinking scene was beautiful to watch.

Jamie Rose as Iago was brilliant – an absolute masterclass in timing and delivery; nothing was lost, the hesitations and facial expressions capturing the duplicitous nature of the character. Finally, Rebecca Hesketh-Smith as Desdemona was enthralling from beginning to end – I could feel the changing emotions that she was going through and she delivered a commanding performance. That is not to say the other members of the cast didn’t – like I have already said, this was an exceptionally strong cast in all departments.

The direction, and particularly the choreography (and I use that word advisedly) was stunning. From the aggression and violence of the fight scenes to the absolutely stunning “bedroom” scene between Othello and Desdemona which was truly a thing of beauty. The movement and use of the space throughout the production was flawless – nothing slowed, nothing jarred – this was a seamless flow from one scene to the next. Director Simon Pittman and fight director Kev McCurdy achieved a flowing, living “thing” from the moment the house lights went down.

Unusually, however, the highest praise should be given to two aspects of live theatre that are frequently glossed over. Laura Hopkins’ set design was simply brilliant. Simple at first blush but (and I don’t want to give away any spoilers here) a work of genius as it develops. I can’t say why because it would spoil the surprise for anyone going to see the production – but the drinking scene only hints at what is to come. Sparse dressing and properties helped to ensure that things kept moving and gave clear locations for each scene. Lastly (but by no means least) Amy Mae’s lighting design added immensely to the feel of the production, I felt like I was experiencing temperature changes brought about by mood change on stage – and that was largely due to the lighting which was stunning. It is strange to be heaping praise on these two aspects of the production – but then maybe this is evidence of the great work that the NYT do that they cover ALL aspects of production with such flair and dedication.

This is a brilliant production from beginning to end and deserves to be played to sold-out houses each night. It only has a limited run, but if you can get to see it, GO!

This is a mating ground. A dog-eat-dog kind of place. And it’s about to kick off.
In an exclusive collaboration, the National Youth Theatre are proud to present Frantic Assembly’s award-winning adaptation of Othello.

This electrifying take on Shakespeare’s thriller of paranoia, jealousy and murder takes a scalpel to 21st century Britain and will leave you breathless.

This entertaining new musical is very fortunate in having as its leading lady the terrific Katie Elin-Salt: she is onstage almost throughout, singing … END_OF_DOCUMENT_TOKEN_TO_BE_REPLACED

“Keep it shallow, keep it pretty, keep it moving,” declares Justin Vivian Bond, letting the audience determine for themselves what precisely is really … END_OF_DOCUMENT_TOKEN_TO_BE_REPLACED

This play didn’t do that well on Broadway the first time around in 1963, and did worse the second time around, even with a revised script, running in … END_OF_DOCUMENT_TOKEN_TO_BE_REPLACED

One of the very few good things about the COVID pandemic is that the opportunities to live stream theatre performances have increased exponentially, … END_OF_DOCUMENT_TOKEN_TO_BE_REPLACED