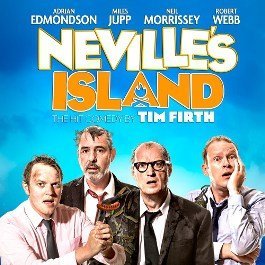 Anyone that has ever worked in the corporate world knows that the two most feared words you can hear are “Team Building”! This seemingly innocuous but potentially soul-destroying phrase can mean anything from an uncomfortable lunch with one of the company directors hearing about how great everything is, to spending a few days away with people you barely know, trying to pretend you really like hugging trees, picking the weevils out of biscuits and bonding with nature. This then is the premise behind Tim Firth’s new comedy “Neville’s Island” at the Duke of York’s Theatre.

Four middle-managers: the cynical and inappropriately sarcastic Gordon (Adrian Edmondson), middle-of-the-road Angus (Miles Jupp), ineffectual, but tries his best, Neville (Neil Morrissey) and evangelical, dedicated twitcher Roy (Robert Webb) – manage, through some major overthinking and an obsession with crosswords, to get themselves marooned on an island in the Lake District whilst on a team-building exercise. Not too much of a problem in this day and age you might think. Just phone for help and enjoy the day until it arrives. Oh, if only life were that easy. With only one smartphone (high on apps, low on battery power – sound familiar?) and one sausage between them, their chances of a standard rescue are pretty slim and they will have to work together to get out of this particular situation. Unfortunately, if you were to imagine the worst ‘team’ you could put together for this then this is it.

Gordon has seen it all, as he worked his way up from the shop floor to his current exalted position, and resents people like Angus who were directly appointed into management without, to his mind, having to work for it. The tensions between these two – often exacerbated by Gordon’s cruel and hurtful ‘jokes’ at Angus’ expense – mounts throughout the show and there is a constant undercurrent of dislike between them. Possibly this is because Angus isn’t as sure of himself as he wants the world to believe. He compensates for his lack of certainty by over-preparation in his life, as evidenced by his bulging rucksack (which should have been named the TARDIS Mk 2), containing everything bar the proverbial kitchen sink (apart from food of course). Trying to keep the peace between these two is Neville, one of those guys who achieve a certain level of management and no-one really knows how or why. He is a bit of a ‘yes’ man, but also hates confrontations so attempts to act as a pacifier in conflict situations. The quartet is completed by Roy who seems to go through life with a child-like innocence and unlike the others, actually appears to be enjoying their situation with a boyish enthusiasm. His belief that God is in some way testing the team and will ultimately provide a solution never wavers for a moment, no matter how hard Angus tries to dissuade him. But Roy has a past, one that is known but not really talked about because what you really need on a small island with four trapped individuals is an elephant in the jungle to add to the mix. All credit has to go to Robert Webb for a truly outstanding performance of Roy, bringing him to life in a sympathetic and totally believable way.

Over the course of the show, we get to know these people. Actually, let’s be honest we probably already know them. The characters are there in some shape or form in everyday life. As with “The Office’s” David Brent, every organisation has one or more of these four somewhere within it. In fact, at times it’s easy to identify with certain character traits of each of them, and this is one of the great beauties of the play. Coming away from it, the main question going through my mind was “what would I do in a situation like that?” I honestly don’t know but I bet whatever I did wouldn’t be as funny or as engaging as this.

Four highly talented comic actors delivering a superb script on the most breathtaking set I’ve ever seen used for a play, make for a fantastic evening’s entertainment that will leave you wanting to know what happened next and ensure you never look at the bread counter in Sainsbury’s in quite the same way ever again.