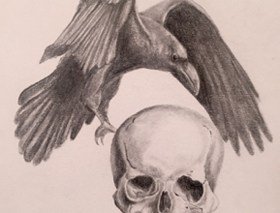 Edgar Allan Poe was already forty years dead when St. Luke’s Church was built in Kew to service the Victorian congregations of this burgeoning suburb. On a quiet night, with the wind in the right direction, you can hear the clacking of the District Line trains along the tracks which were crucial to the expansion of London into the Home Counties.

However, there are no quiet nights with Poe’s spirit walking abroad, a fact reaffirmed with chilling power by the Kew Players with their production of Nightfall, a kind of dramatic E.P comprising four of the American’s greatest hits. He would have applauded the setting, high in the converted masonry of this multi-tasking community building. Far below them was the remaining body of the church, and next to that a community room where the local photographic society was meeting.

So there was Poe himself, full of chastening narratives and terrible forebodings. You might say that he was tucked away up here like a guilty secret in a church attic, except that there was nothing furtive about it. He was, as ever, full of disclosure, all the more enthusiastically so for playing to a packed audience. E.A.P., was, as his later compatriots might have said, sharing.

Looking down the character list, the first reaction is to think that the stories have been reworked in order to comprise one single, larger narrative, in the manner of TV’s Dickensian. But no, and fortunately so. The four tales stand alone while their characters, even their houses, fall apart, none more so than the eponymous Roderick Usher.

It’s a risky venture, not least because of the sheer relentlessness of Poe’s poetic and narrative voice. Almost all his characters are more or less permanently in extremis.

If his life and Sigmund Freud’s had coincided, the famous analyst would possibly have diagnosed all manner of psychoses and neuroses, of which his creations were manifestations. In the sense that his Gothically Horrible stories entertain and his ghost tales grip, one would have to agree that these things are better out than in. Yet there is in Poe that monotony borne of obsession, and this is both enabled and alleviated by the rhythmic virtuosity of his most famous poem, and this programme’s opening item, The Raven.

As the narrating but fully immersed author, Craig Cameron-Fisher goes with the flow of the verse. You could say he has no more choice than would a surfer launching himself against the waves, but this does not of itself make the job easy.

Kurt Walton takes a similar approach to the benighted Roderick Usher, demonstrating through the agony of his loss that Poe, for all his perceived symbolism, was nothing if not an emotional realist.

Perhaps the most successful reading of the sequence is that of The Pit and The Pendulum, made both enticing and challenging by the existence of the famous 1961 film version with Vincent Price as the sadistic Spanish inquisitor Nicholas Medina.

The Kew Players performance becomes if anything more menacing through the necessity of invention. Here we cannot see the pendulum as it lowers towards the belly of its victim, yet suspense does not get more literal or more graphic than this.

Goodness, can we hear it swishing through the air as the commentaries of torturer and tortured are set against each other like a hopelessly dysfunctional debate between life and death.

Bold­stroked direction by Scott Tilley in his inaugural outing for Q2, and full-blooded responses from his eight­strong cast, versatile as the building. Particular respect to Cameron­-Fisher for meeting the challenge of the author head ­on and emerging admirably Poe­faced.

Night Falls over Kew
Edgar Allan Poe stands alone in the flickering darkness of his mind, trying desperately to convince himself — and us — that he’s not mad.

Q2 Players bring us ‘Nightfall With Edgar Allan Poe’, a theatrical adaptation of four tales Poe himself considered his best: ‘The Raven’, ‘The Fall of the House of Usher’, ‘The Pit and the Pendulum’, and ‘The Tell-Tale Heart.’
Enter the world of Poe…if you dare.

It’s a production of Hamlet that starts at 7:30pm and manages to come down on the ‘right’ side of 10:30pm - the hardcore fans and followers of … END_OF_DOCUMENT_TOKEN_TO_BE_REPLACED

For seasoned theatregoers, this version of The Three Musketeers comes across as one of those shows that takes a similar format to something one has … END_OF_DOCUMENT_TOKEN_TO_BE_REPLACED

Already in a good mood because there is abundant free parking after 1.30pm on a Saturday (and all-day Sundays) near the venue, Little Angel Theatre’s … END_OF_DOCUMENT_TOKEN_TO_BE_REPLACED

There’s an air of familiarity for people who have been in the entertainment industry in this narrative. Global pandemic or not, supply always exceeds … END_OF_DOCUMENT_TOKEN_TO_BE_REPLACED

This was originally meant to be called West End Musical Christmas, and got postponed as the Government had no choice but to impose another lockdown - … END_OF_DOCUMENT_TOKEN_TO_BE_REPLACED