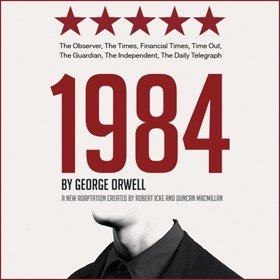 Returning to the Playhouse this June, Robert Icke and Duncan Macmillan’s adaptation of Orwell’s classic novel 1984 continues to enthral audiences. With a flawless cast and ruthless staging, the play offers 101 minutes of extreme, visceral storytelling.

Despite feeling very well-acquainted with the text, Icke and Macmillan’s adaptation breathes new life; the narrator’s voice is realised through the ensemble of solid performers, the set and lighting design delivering the audience into a world that is both strange and familiar.

On this front Chloe Lamford is to be applauded for creating an aesthetic that is both generic and entirely specific. While the trappings could suggest any moment of the last century, the all-seeing screen overhead speaks distinctly of a reality we can recognise, as modern consumers in a digital age. We as the audience become the ultimate ‘big brother’, privy to projections, screens, screens within screens, and the play itself. We can read this multi-layered effect as very much at home in our present. As the stage transforms and intensity builds, you will be swept into this story which speaks to the darkest fears of all men.

The clever use of hidden and hand-held cameras capture the action; we are the ultimate voyeurs of Winston’s story, conscious of the dual nature of conscious construct and ambiguity inherent in the story. Icke and Macmillan’s weaving through of the layers of consciousness, the “onlookers” of the tale, and consciousness of the audience, adds much to this new reading of the tale. Some loyalists might find this emphasis on the historical retelling of Winston’s story too far of a departure – this rather depends on the degree of hopefulness you’re willing to accept in this dystopian tale. I personally prefer the darkness of the original, but this interpretation still results in an experience which translates the magnitude of this classic tale with dexterity and elegance.

Andrew Gower excels as Winston, despite hardly speaking for the first several scenes; Angus Wright delivers a chillingly composed O’Brien. The cast are flawless in their enactment of an outstanding script. 1984 succeeds in bringing new life to Orwell’s work; I left the Playhouse thoroughly removed from myself.

Icke and Macmillan have skilfully delivered their vision, executing a powerful story that thoroughly retains its relevance. This is not a casual night at the theatre – it is an uncompromising 101 minutes without interval, not to mention that the use of loud noises and strobe lighting may not be to the tastes of the more sensitive viewer.

However, 1984 is a tale designed to disrupt and challenge you: let it!

Following a sell-out international tour, the five-star smash hit production of Orwell’s dystopian masterpiece 1984 is back in London from 14th June. Now seen by over a quarter of a million people, theatre’s most powerful event returns to London this June for a limited season. Don’t miss out.

Orwell’s ideas have become our ideas; his fiction is often said to be our reality. The “definitive book of the 20th century” (The Guardian) is re-examined in Robert Icke and Duncan Macmillan’s radical and much-lauded staging exploring surveillance, identity and why Orwell’s vision of the future is as relevant now as ever.

This happens to be a timely production: employment has hit the headlines again at the time of writing, this time because of the concept of ‘quiet … END_OF_DOCUMENT_TOKEN_TO_BE_REPLACED

An opera (well, technically, an ‘opéra comique’, as there is spoken dialogue) in a relatively small space like the Charing Cross Theatre calls for … END_OF_DOCUMENT_TOKEN_TO_BE_REPLACED

Shoes, one would have thought, are fairly recession-proof. The problem for Charlie Price (Joel Harper-Jackson, reprising the role he previously played … END_OF_DOCUMENT_TOKEN_TO_BE_REPLACED

The descriptions of what happens in this show are so vivid that paradoxically they leave nothing to the imagination – and, at least at the performance … END_OF_DOCUMENT_TOKEN_TO_BE_REPLACED