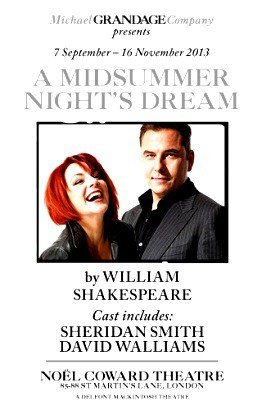 With Shakespeare, you either get it or you don’t. I don’t usually “get it”. However, the Michael Grandage’s version of A Midsummer Night’s Dream at the Noel Coward Theatre had me embraced from the word go. With a beautiful set, gorgeous costumes (or lack of – I shall explain later) and spell-binding acting, this production is not one to miss.

A Midsummer Night’s Dream is probably one of the easiest of Shakespeare’s plays to understand and although at some points I was completely baffled by the language being spoken I completely understood everything that was going on due to the emotions being portrayed by this phenomenal cast.

Led by the gorgeous award winning actress Sheridan Smith as Titania/Hippolyta and the hilarious David Walliams as Bottom, this production is filled with laughs, semi-naked men (lovely for the ladies) and some more laughing (not due to the semi-naked men).

Although the language is quite obviously Shakespearian, the direction given by Michael Grandage is extremely contemporary, meaning this production can relate to the audience of today. The fairies are extremely bohemian (and somewhat high throughout) and these members of the cast show off not only their acting skills but also their dancing and singing skills in well choreographed musical interludes.

Susannah Fielding (Hermia), Katherine Kingsley (Helena), Sam Swainsbury (Lysander) and Stefano Braschi (Demetrius) work extremely well as a quartet and in my opinion do not receive half of the credit they deserve. Their choreographed fighting and hilarious banter has the audience in stitches and Braschi and Swainsbury spend the majority of the performance in just their pants which I can tell you is appreciated greatly by probably all of the females in the audience and envied by the gentleman. 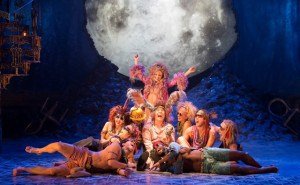 Obviously I cannot leave out Sheridan Smith and David Walliams. I had great expectations for this duo and they certainly did not disappoint. Smith made the perfect Fairy Queen and she had the audience in the palm of her hand. She pranced her way around the stage beautifully playing a sexy Titania seducing the Donkey dressed Walliams. I have no doubt at all that her performance in this production will snag her yet another award.

Walliams literally had the audience crying with laughter – particularly in his final scene. He completely camps up the role of Bottom and although he doesn’t make the most beautiful donkey – he certainly gives this role his all. I have never laughed so much during a death scene and it was refreshing to see the other cast members react to his performance in the same way (but not coming out of character of course).

This production will certainly not disappoint anyone – young or old – Shakespeare fan or not – theatregoer or theatre virgin. Although I have not mentioned every cast member specifically – they all shine in their own way throughout the performance.

This has given me a new found love for Shakespeare – which believe me – is a miracle after my previous history with his works – and I look forward to watching the production again in only a few days. Must be good eh?!

If the audience were to be exposed to full versions of the seventy-four songs listed in the programme, it would be a very long show indeed. I suppose … END_OF_DOCUMENT_TOKEN_TO_BE_REPLACED

How can a play be both charming and devastating? Through its tight script, abundant humour and pitch-perfect performances, 4th Country manages to … END_OF_DOCUMENT_TOKEN_TO_BE_REPLACED

Britain, so a London cab driver once told me, is obsessed with the Second World War, as though it happened just recently. Power Luncheon would seem, … END_OF_DOCUMENT_TOKEN_TO_BE_REPLACED