You are here: Home / Reviews / Review of Aladdin at the Churchill Theatre, Bromley 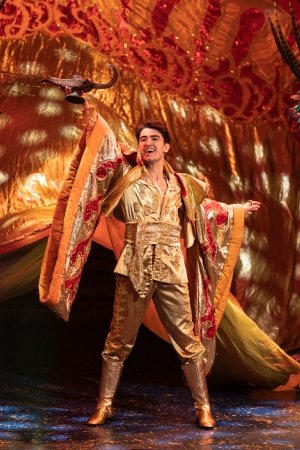 Every provincial theatre has to have a pantomime each year and most of them are produced by QDOS Entertainment “the world’s biggest pantomime producer” who this year are putting on over thirty pantos up and down the land including Goldilocks and the Three Bears at the London Palladium – and you don’t get much bigger than that.

This year’s offering at the Churchill Theatre in Bromley is Aladdin. The main attraction is Christopher Biggins as Widow Twankey who’s backed up in all the publicity material by comedian Rickie Jay as Wishee and ventriloquist Max Fulham as Washee – neither of who are exactly household names. As for Biggins (as he’s known to all his celebrity friends), for some reason he’s become a so called “national treasure” and is the “star” of the panto. I have no idea why as he can’t sing or dance and isn’t very funny and was upstaged by the four delightful children brought up from the audience to play various musical instruments whilst the cast changed costume for the finale.

Those costumes and the many others are excellent and the sets are delightful and look as if they’re straight out of a storybook. The comedy is led by Jay and Fulham along with Fulham’s monkey sidekick Gordon. The love interest comes from Emily Hawgood as Princess Jasmine with Yazdan Qafouri doing the honours as the eponymous hero (although I do miss the old tradition of a “Principle Boy” i.e. a girl playing the part). The villain who gets all the boos and hisses is Ryan O’Gorman as Abanazar. Completing the main cast is Emily Beth Harrington as Scheherazade, the Slave of the Ring.

QDOS pantos can be a bit formulaic and this production of Aladdin is no exception. We get the obligatory pop songs although this year I failed to recognise most of them! As with all QDOS productions, the sets are excellent and it’s obvious where a lot of the budget has gone. The big “ahh” factor this year was Aladdin’s flying carpet that flew out over the audience and got a big cheer.

However, I think the production is let down by some unimaginative writing with lots of local references. The jokes weren’t sophisticated enough for the grown-ups or funny enough for the many children in the audience and there weren’t too many big laughs. In fact, the biggest laugh of the night was when in one of the patter scenes, Fulham said a mild rude word. One scene in particular when Jay lip-synched to various songs, was quite smutty and hopefully went over the heads of the children in the audience as it was aimed purely at the adults.

My big criticism though is reserved for the loudness of the band. There were only three of them, keyboards, bass and drums but I’m sure there were some backing tracks thrown in. They played far too loud – at almost rock concert levels which meant the singers had to strain to be heard over the cacophony the band were making – why so loud in a panto?

However, despite my criticisms, the audience mainly made up of hundreds of young children loved it and had a great time. There was plenty of call and response set-pieces with lots of “It’s behind you” and “Don’t touch the prawn balls” etc. and the kids were very responsive shouting back with great gusto, My first theatrical experience was at a traditional panto at the London Palladium and it’s a wonderful way for young people to get a taste of the theatre – I’ve never forgotten it. So, if you’re in Bromley and fancy taking the kids to see a panto, then ignore my criticisms and go and see for yourself.

Starring stage legend Christopher Biggins as the iconic Widow Twankey, and hot off the heels of Cinderella, this year’s panto will be a magic-carpet ride you’ll never forget, in the wish-granting family panto, Aladdin.

A mainstay of entertainment for a number of decades, Christopher Biggins is best known for his numerous iconic television appearances in Porridge, Whatever Happened to the Likely Lads? and Some Mothers Do ‘Ave ‘Em, as well as extensive West End credits which include Joseph and the Amazing Technicolor Dreamcoat, Jesus Christ Superstar and Chitty Chitty Bang Bang. Biggins was also crowned King of the Jungle in 2007 when he won I’m a Celebrity Get Me Out Of Here.

Packed with all of the traditional pantomime ingredients Churchill Theatre audiences expect, Aladdin will feature a star cast, a lamp-load of comedy, jaw-dropping special effects, sensational song and dance and plenty of boos and hisses the whole family will enjoy.

Follow Aladdin, his brother Wishee (Comedian Rikki Jay) and Washee (ventriloquist Max Fulham), and of course his mother Widow Twankey, on a spectacular adventure, with flying carpets, a wish-granting genie, an evil sorcerer and plenty of festive magic.

Aladdin
Everything You Could Wish For In A Panto
Churchill Theatre, Bromley
SAT 7 DECEMBER 2019 – SUN 5 JAN 2020
https://churchilltheatre.co.uk/