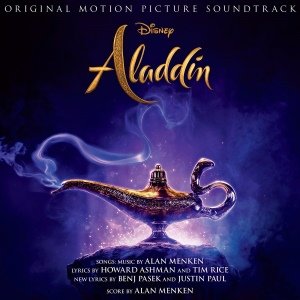 The ‘2019 live action version’ of Aladdin (to distinguish from the 1992 animated motion picture), is not the first remake that the Walt Disney Company has embarked on, and the chances are they have yet more in the pipeline. A remake is, of course, an opportunity to revise, reshape and re-orchestrate, and they’ve done a pretty good job on those scores here. There will be those who won’t like the new versions in this Original Motion Picture Soundtrack, primarily because they are such big fans of the ‘old’ ones that any revision simply isn’t the same.

But what is immediately striking about, say ‘One Jump Ahead’, is the increased use of instruments (okay, they might have used synthesisers) that produce sounds with a stronger Middle Eastern flavour than before. The orchestrations themselves seem more sophisticated, too – I don’t personally think there’s such a thing as tracks being ‘overproduced’, but even I’ll admit that there are moments when the overall effect is so perfect and pristine it is in danger of being less heartfelt than a slightly more rugged recording would have provided.

The Genie (Will Smith) may not have the powerhouse voice or the vocal range of the West End and Broadway actors who have done the same role in Disney’s stage adaptation, but the lyrics are all crystal clear, and there is at least a genial (sorry) personality that comes across well, particularly in ‘Friend Like Me’ and ‘Prince Ali’. Then there is the new song, ‘Speechless’, sung by Princess Jasmine (Naomi Scott), who has a good belt in this contemporary number, a neat addition to this updated rendering of a classic story. It very much appeals to the ongoing fight for equality (even if there’s no getting away from her very privileged background): “’Cause I’ll breathe when they try to suffocate me / Don’t you underestimate me / ‘Cause I know that I won’t go speechless”.

There have been some lyrical changes along the way, too, though ‘A Whole New World’ is largely left alone in every respect, with Aladdin (Mena Massoud) and Jasmine on the flying carpet (which, given the sheer popularity of the song and its background story, isn’t really a spoiler) just having a (ahem) magical moment. A slightly longer version, sung by Zhavia Ward and Zayn Malik, which plays over the many credits at the end of the film proper, is too schmaltzy for my liking – others may beg to differ. The ‘end title’ version of ‘Friend Like Me’, featuring Will Smith and DJ Khaled, practically takes Smith back to his ‘Fresh Prince of Bel Air’ days, and while it isn’t the sort of style of music I would ordinarily listen to, it’s a hoot.

Then there are the tunes without lyrics, which either accompany scenic footage, spoken dialogue or both. Most are fairly self-explanatory from their titles, such as ‘Jasmine Meets Prince Anders’, ‘Aladdin’s Second Wish’ and ‘Jafar Summons The Storm’. Not every soundtrack out there includes these sorts of tracks, and while I suspect they are heard at their best whilst watching the movie (that is, in its proper context), it is admirable that fans are being given a full and complete recording – and it’s worth looking out for elements of ‘Proud of Your Boy’ from the stage musical. A pleasant addition to a Disney film lover’s album library, it’s familiar enough to fall short of a whole new world, in a good way, whilst providing a refreshing and delightful listening experience.

A thrilling and vibrant live action adaptation of Disney’s animated classic, “Aladdin” is the exciting tale of the charming street rat Aladdin, the courageous and self-determined Princess Jasmine and the Genie who may be the key to their future.


Order the album via Amazon

The Body Remembers is an intimate, passionate, and nuanced exploration of bodily trauma and the relationship we have with bodies. In this solo … END_OF_DOCUMENT_TOKEN_TO_BE_REPLACED

Some sprightly choreography sprinkles this production of Top Hat, and I have yet to work out whether it is because of or despite the relatively … END_OF_DOCUMENT_TOKEN_TO_BE_REPLACED

What are the moments that make up a lifetime? As Elizabeth and Tom reminisce about their lives together from school to old age we realise the most … END_OF_DOCUMENT_TOKEN_TO_BE_REPLACED

The much-beloved Figs in Wigs return to London with intent. This take on Little Women by Louisa May Alcott takes you for a ride, swings you around, … END_OF_DOCUMENT_TOKEN_TO_BE_REPLACED

As one might expect in a play about the life and times of Mary Prince (Amantha Edmead), born a slave in the late eighteenth century, she is subjected … END_OF_DOCUMENT_TOKEN_TO_BE_REPLACED