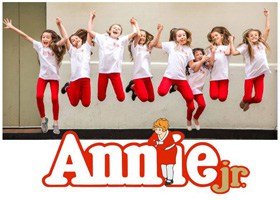 Most people are familiar with the popular movie musical Annie, based on the comic strip by Harold Gray. But when I first saw marketing for Annie Jr, I was really confused. Had I somehow remembered the title of the show incorrectly for my entire life? As it turns out – no.

Annie Jr is the show adapted to a 60 minute version for young performers, and the entire cast are children, with some late teens in the major adult roles. This production is presented by P2P Productions, a performing arts programme for young performers, and directed by Matthew Chandler. The cast list is very large, or I should rather say cast lists as there are seven performers to each named character, and a big group of orphans and ensemble members. The headshots fill five pages of the programme.

I suspect the majority of the audience were friends and family of the performers, as I have never seen a more enthusiastic crowd in the West End. And it was well earned, the kids worked hard and performed their numbers beautifully. Our Annie, played by Gracie Weldon, has buckets of charm and a beautifully clear voice. All the orphans are wonderful, and Abigail Tebbit as Molly is simply adorable.

But this performance was all about Jessica Niles as Miss Hannigan. I have never seen Hannigan played with quite this much sass, and her performance of Little Girls is the funniest I’ve seen. Niles’ Hannigan seemed more fed up and desperately single than the more vicious versions I’ve seen in other productions. But there’s a heck of a lot of spark in her. At one point she gets angry and starts removing her earrings, which is such a small detail but the effect was great, you know Hannigan is going to whoop some serious orphan ass when the earrings come off!

Another show stealer was the puppet version of Sandy, operated by Hugo Cotton. I had no idea that a dog wagging his tail would ever send me in stitches. Unfortunately Sandy only appears in the one scene in the beginning and then runs away, which is a shame as the dog was so wonderfully done, but brevity is key in this production.

The only criticism I can really give this show is that it feels a bit rushed, not giving the relationships between the characters enough space to really grow. But as it is a 60 minute adaptation, that can’t be helped.

A terrific and charming production with great performers – everyone left the theatre smiling.

P2P Productions presents the wonderfully affectionate Broadway musical Annie Jr.
With equal measures of pluck and positivity, little orphan Annie charms everyone’s hearts, despite a next to nothing start in 1930s New York City. She is determined to find her parents, who abandoned her years ago on the doorstep of a New York City orphanage run by the cruel, embittered Miss Hannigan.

Featuring classics It’s the Hard-Knock Life, I Think I’m Gonna Like It Here and Tomorrow, Annie is the perfect family friendly musical and an ideal show for children to experience as their first musical live on stage.

It is 2002 – another Royal Jubilee year, and HRH (Mary Roscoe) is due to open a new Science wing in a 'sink' comprehensive where Dr Derek Jones … END_OF_DOCUMENT_TOKEN_TO_BE_REPLACED

Dr Anna LaRosa (Dr Stefania Licari) has a lot to say. Just as well, as she’s the only one on stage in this medical comedy, which largely draws its … END_OF_DOCUMENT_TOKEN_TO_BE_REPLACED

Nikhil Parmar’s one-man show, originally written as a TV pilot, manages to touch on a wide range of themes from Islamophobia to modern fatherhood with … END_OF_DOCUMENT_TOKEN_TO_BE_REPLACED

Handel’s 1738 opera Serse (or Xerxes) is an exploration of power, love and human frailty. King Serse falls in love with the voice of his brother … END_OF_DOCUMENT_TOKEN_TO_BE_REPLACED

Lea Salonga has her fans. She also has some superfans, the ones who yell, “I love you Lea!” at almost every opportunity. If that wasn’t enough, there … END_OF_DOCUMENT_TOKEN_TO_BE_REPLACED