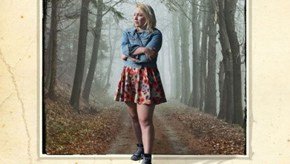 When you arrive for Beans on Toast, part of Wimbledon’s Illuminate theatre festival, the first thing you’ll probably notice is the photograph on your seat. Mine was of a man making a snow angel; my neighbour had something different. On the back of each is a handwritten note – ‘we are the sparks that never fade’.

Beans on Toast, by Patch of Blue Theatre, is the story of a young couple, Jen and Scott. It’s told through a series of memories, all jumbled up and chaotic, like the photos scattered at random around the theatre. None of their adventures are particularly glamorous or dramatic – they go to the zoo, play darts, discuss what they’d do in the event of a zombie apocalypse… In other words, they’re a couple just like any other. And with Jen and Scott each played by three different actors, so that the pairings are mixed and matched throughout, there’s a sense that they really could be any couple.

They’re so easy to relate to, in fact, that it starts to feel like they’re friends that we’ve known for years. After all, we’ve enjoyed the story of how they met, laughed at their awkward MSN relationship chat (because who hasn’t had a few of those in their time?) and shared in their ridiculous arguments. As a result, the moment we realise Jen’s gone, and why, is so devastating it’s almost like a physical blow.

The set looks like a living room, with all the clutter and chaos that make up a life, and is lit by lamps, giving it an intimate, inclusive feel. Each scene has its own title, evoking complete memories with just one word: ‘Grandad’, ‘speech’, ‘can’… By sharing these code words with the audience, the actors invite us in and make us part of their story, ensuring that these precious memories will live on.

As for a soundtrack, this is provided by the cast, in the form of beautiful folk music. The multi-talented performers play several instruments, dance, and sing gorgeous harmonies, whether in a funny, upbeat number about their first kiss, or the gentle love song that recurs throughout the play.

Beans on Toast is a really stunning piece of theatre, which will make you laugh, a lot, and quite possibly cry quite a bit too. But it also leaves you with a question. Just because we lose someone doesn’t mean the memories of them are automatically erased. But whether it’s better to hold on to those memories, or let them go and move on, is left open for debate.

Scott loves Jen. Jen loves Scott. Jen is gone. Warm, funny and touching memory play by lamp-light, fragmented memories and live folk music. Created and performed by graduates of Mountview Academy of Theatre Arts, this beautiful new musical play asks whether we should let go of what we have lost, or cling on to the memory if it brings us happiness. Fresh from a sell-out run in Edinburgh and at Theatre 503.

Titus Andronicus is not usually a comedy, it is usually a bloody, villainous and vengeful tale, but tonight it is a comedy and a rather amusing one at … END_OF_DOCUMENT_TOKEN_TO_BE_REPLACED

This show is not without clichés - there are three of note in this production. Firstly, the French horn of the show’s title is personified, speaking … END_OF_DOCUMENT_TOKEN_TO_BE_REPLACED

There’s very little in the way of set in this show: aside from chairs, a few crash barriers and at one point, a red carpet, the actors’ movements … END_OF_DOCUMENT_TOKEN_TO_BE_REPLACED

South African born, but raised on the Isle of Man, Pierre Novellie is a true raconteur rather than just another 'stand-up' comedian. He says about his … END_OF_DOCUMENT_TOKEN_TO_BE_REPLACED

This show, Willy Hudson began by saying, is about himself. It is written by himself, is directed by himself and executive produced by himself. Almost … END_OF_DOCUMENT_TOKEN_TO_BE_REPLACED