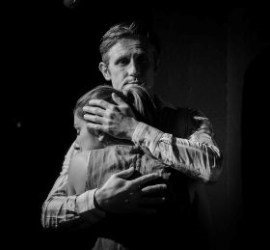 The intimate, subterranean space of Baron’s Court Theatre could not more different from the 300-foot high Blavatsky’s Tower. As the audience, we are almost on top of this cast of five exceptionally gifted actors. Yet the illusion of extraordinary elevation from the ground and total detachment from reality is maintained. Like the lesser mortals on the lower levels, we are the “crushed”, stunned by the enormity of Blavatsky’s visitation of his unearthly fantasy of moral and architectural superiority upon his unfortunate family.

Moira Buffini, one of this country’s most interesting modern or possibly postmodern writers, wrote this piece in 1998. This show is produced by Biggles Bristol and directed by Will Maynard. It is intense, against a background of sinister wind howling around the top floor of this tower where its creator’s children struggle against death, incest, love and life itself. Each character acts out the existential despair visited on them by their insane father who has built this bizarre, isolated world 400 steps above the earth. The grown children do not use the lift. “We have never been made complacent by comfort.”

Early on we meet Dr Tim Dunn, the first non-family member to enter the penthouse for years. Mountview-trained Ian Hallard was exceptional in this role and brilliantly watchable. At no point however did he steal the scene from his fellows, Timothy Allsop as the pitiable Roland, the cool and controlled Pia Fitzgerald as Audrey and Francesca Wilding as the innocent yet clever Ingrid. Ted Merwood plays Blavatsky, managing somehow to convey his deluded charisma through blindness and deadness. Together they created a comic balance which made the self-delusion of the tyrannical father, determined to keep his family protected in their literal superiority, totally convincing. 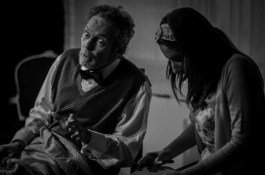 One of the really great things about this production was being able to lose oneself completely in the genius writing of Buffini, and to indulge through the skill of the actors in the experience of the mad fantasy of world creation and domination, and explore all that in one’s own head as the play progressed without reality ever intruding. This was made possible by the skill of the actors in maintaining the artifice at every single second, even though we were so close as an audience we could see every hair of their heads, hear every sigh, visit every expression in our own hearts. Not once did I see a single member of the cast acknowledge, even by a glance, our presence. Not once was there an out-of-place smile at the dark humour of the script. In such a close and closed setting, that must have taken some doing. It made the experience truly enjoyable and quite refreshing because this skill, so important to maintaining illusion on stage, seems to be rarer than it once was, particularly on the fringe.

At the heart of this play is the question of normal. This isolated family has created its own “normal”. Everybody else, to them, is not normal. The play raises questions in a multi-cultural Britain that are disturbing as well as intriguing. It evokes wastelands and wantonness from literature down the ages through to a futuristic nightmare of loveless concrete. This was a great evening, because it entertained while it tutored, and puzzled while it progressed. In the end the warnings are stark. Resist the temptation to play God and keep your feet on the ground.

Harold Shipman, known to his many patients, family and friends as ‘Fred’, was Britain’s worst serial killer. The official inquiry into his crimes … END_OF_DOCUMENT_TOKEN_TO_BE_REPLACED

Being one of Arthur Miller’s best-made and most challenging plays, The Crucible is also one of his most frequently performed. I was going to say … END_OF_DOCUMENT_TOKEN_TO_BE_REPLACED

To be fair, Linda Lavin called her concert Love Notes, there’s an album of the same name, and that’s more or less what it was about - variations on … END_OF_DOCUMENT_TOKEN_TO_BE_REPLACED

Noughts & Crosses is a euphemism for blacks and whites. The Noughts are the whites and the Crosses are the blacks. In the world of the play, the … END_OF_DOCUMENT_TOKEN_TO_BE_REPLACED

This ‘juke box’ musical offers highly polished, undemanding, feel-good entertainment, showcasing, as it does, 30 songs dating from the 1960s to the … END_OF_DOCUMENT_TOKEN_TO_BE_REPLACED