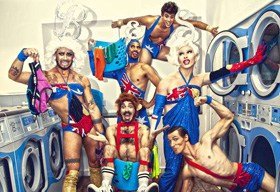 After a dazzling, sell-out run in 2014, the larger-than-life BRIEFS return to London Wonderground in 2015. Your glamorous host Shivannah guides you through a jaw-dropping, eye-popping evening of extravagant birdbath boylesque, too-close-for-comfort yo-yo tricks, valiant aerial acrobatics, irreverent interludes, and show-stopping drag artistes. They’ve spent the last year touring the globe, from Berlin to Brisbane, and now they’re back, with more circus skills, more disorder and more burlesque… with balls!

Fez Fa’anana is Shivannah, our host and compare for the evening. Quite a dry sense of humour but had the audience laughing in no time. Perfect as a host for the night plus we got her magic act, which was in keeping with the humour and seemed more of a mickey take than an act that focuses on the magic – definitely funny though.

We are given a variety of acts throughout the evening and mostly they entertain, impress or evoke the intended emotion (you probably need to see the show to understand that statement). I say mostly as personally I didn’t enjoy Dallas Dellaforce’s drag segment. Nothing against drag, it is great entertainment; I just didn’t find this particular version enjoyable.

However the input Dellaforce has into creating the show is definitely to be commended, as the show is great. We had Thomas Worrell wow the audience with his aerial hoop work, contortion and hand balancing routines. This was in addition to Mark ‘Captain Kidd’ Winmill who amazed the audience with his silks routine. The strength, style and grace shown was epic, I think that is the best way to describe it.

Louis Biggs is the young member of the group and certainly appeared to be the cute attractive one; which was played on to perfection (this is from my perspective influenced by the reaction of the audience). Biggs gives us a range of talents including the Rubics cube, yo-yo (who’d of thought you can use that part of the anatomy to yo-yo with), hula-hoop and plenty more.

The last act I will mention comes from Evil Hate Monkey…. Banana…. he does have a, possibly unhealthy, love with this fruit which is shown in comical fashion. You do have to experience this act though. Should you go and see this? Without doubt yes. If you don’t like your entertainment camped up to 11, close to the mark and crude it might not be for you. If you’ve an open mind and are not faint-hearted, then you should enjoy it. If you’re in the first 3 to 4 rows of the stalls prepare to get wet!

BRIEFS
Big top Bravado meets boyish burlesque, comedic campery meets contemporary circus, sensational spectacle meets shameless splendor. This summer, Briefs, the heart-stopping blend of cabaret burlesque, Australian machismo and punkish swagger is set to take the UK by storm following a barnstorming year of sell out runs and ecstatic reviews across the world. In the lead up to their mega London season at London Wonderground throughout August and September, the boylesque supergroup have a packed diary of special appearances and guest slots at some of the biggest summer events across the country, demonstrating that they are amongst the most in demand live acts around. Over the course of two consecutive weekends in June, they will perform at three major summer festivals – at the biggest celebration of live theatre in the UK West End Live, in the largest greenfield music and performing arts festival in the world, The Glastonbury Festival where they headine the Circus Tent every night for the second year in a row and at London’s prime LGBT event, Pride. This will be followed by an invitation from comedian John Bishop to take part in his prime-time BBC1 series in July before they hit the Southbank in August for the main event.

The six Aussies and one New Yorker are powered by a fierce energy as they mix up a potent blend of drag, glamour and athleticism, infused with dancing, tumbling, juggling, acro-balancing, trapeze, hula hooping, lip syncing, sequins feathers and frocks. .

Incorporating whole portions of new material into some of the Briefs’ favourite fare, the show combines an eye-popping blend of dog show satire, intimate yo-yo tricks, wind machines, Busby-Berkeley spectacle, pure burlesque and an array of serious circus skills. Audience favourite Shivannah (Fez Faanana) has several new and surprising tricks up her voluminous sleeves and leads the chaotic troop through the show with brazen beauty. The Las Vegas award-winning ‘Captain Kidd’ takes a turn as the fabulous bird in his own golden bird bath and stuns the audience with alluring athleticism. The new disorderly Briefs line up also includes the ferocious Dallas Dellaforce, who brings dynamic drag to a new level; one of Australia’s leading aerialists, contortionists and circus trainers, Thomas Worrell, who literally ties himself in knots; Evil Hate Monkey, escaped from New York Zoo and dazzling with his award winning burlesque banana ballet, and fresh-faced circus brats Lachy Shelley – from CIRCA ZOO and FLIPSIDE – and Louis Biggs – from FLYING FRUIT FLY CIRCUS – who melt hearts and have the audience gasping for more.

Since headlining the circus big top at Glastonbury last June, Briefs have strutted their way around the globe taking in London, Brighton, Berlin, Edinburgh, Darwin, Perth and Adelaide and they will take residency at Berlin’s legendary Tipi am Kanzleramt, and debut in Hamburg and Paris before returning to London Wonderground in August.

Running Time: 1 hour 20 minutes
Age Restrictions:
Strictly over 16
Show Opened: 5th August 2015
Booking Until: 27th September 2015
Important Info: Contains adult content and some nudity. For the fun-hearted, not the faint-hearted! Latecomers may not be admitted.