You are here: Home / Reviews / Review of Cinderella at The Vaults 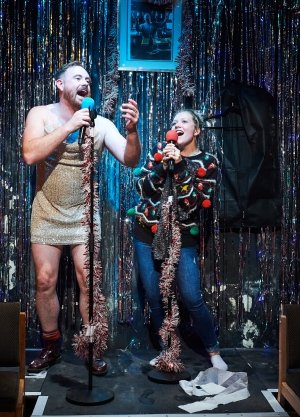 So how do you like your Panto? Do you want to go fully immersive? Totally subversive? Classic crass of a nostalgic time when Michael Barrymore was a housewife’s favourite and Roy Chubby Brown was just ‘cheeky’? Perhaps you want turn-of-the-century British music hall (when the thrill of a ‘principal boy’ was all about the rare sight of a woman’s silhouette revealed in fitted breaches)? Or maybe you want layers and layers of gender-fluid in-jokes on top of a tradition which presents cross-dressing rituals that have endured longer than Boxing Day was a bank holiday?

Given the endless varieties, re-imagining, tropes and tributes, there is both great opportunity and great challenge in Panto these days. On the one hand, there is a safety in what to expect – with more social conformity than enforced by the travelling fans of any football club, the audience knows the catch-phrases and what’s expected of them in the main. But as the panto market has splintered into so many sub-genres, the sure-fire comfort with the rituals isn’t always guaranteed.

Writer Luke Barnes and director Jimmy Fairhurst’s Cinderella at the Vaults is a bit of a mish-mash in the same vein. Squarely in the piss-take category with dashes of ‘wokeness’, it still had a hearty laugh at the usual subjects. Set in a faded pub/working men’s club (where you can get real drinks), with the Panto Dame, Mike (Jimmy Fairhurst) referencing northern towns and offering loads of Granada Television long-running serial-type cheese, we also meet some EastEnders archetypes including a casual ultra-Essex Boy version of Prince Charming (Jack Condon) and Simone and Garfunkle, the meretriciously attired stepsisters, along with the Coronation Street-sounding Wicked Stepmother, Judy Garland (Lizzie Hopley) and Buttons the suicidal dog (Patrick Knowles). This production can’t quite decide who should be the figure of ridicule and who should be heroic. It therefore seems to protect itself from taking much of a stand by donning plenty of post-modern ironic distance and hoping that a good sing-song with a few layers of in-jokes will do the trick. And it might have just got away with that if only the majority of the cast could really belt out a tune, but sadly they can’t.

Fairhurst has cast some impressive actors (many of them trained at the nation’s finest conservatoires) who take their roles to the extreme and have a blast. Jack Condon’s Prince Charming is a strong example of this and the physical comedy he brings to his performance is first-class. Lizzie Hopley knows how to work a room and command attention and delivers a finely threatening bit of cabaret-style audience interaction. Patrick Knowles has an awful lot of explaining to do as Buttons but his comic moments shine with strong timing and some truly surprising moments. Megan Pemberton is shamelessly brave in her very funny and very physically-committed rendering of Garfukel. But only a few of the cast members could be described as the triple-threats one expects to encounter in any form of professional London musical theatre. Perhaps Barnes thought it was funnier to focus on karaoke and the unpolished voices it usually attracts but unfortunately it doesn’t work. For 90 minutes of Panto to fulfil its mission to entertain, it needs not only to be well-acted, well-conceived and funny; all of its musical numbers also need to please the senses. Unfortunately, with just a few exceptions, this Cinderella doesn’t have the musical theatre chops to have earned its place at the ball which is frustrating and a wasted opportunity.

Luke Barnes has chosen to make his Cinderella (Rosa Coduri) an ‘independent lady’ who can reject the traditional fairytale urge that makes marriage synonymous with living happily-ever-after. However, he has oddly decided to conclude the show with a rousing audience sing-sing of a Christmas classic without the same imperative of deconstruction. A concluding singalong is a fairly stock Panto device and the karaoke dimension places the convention even more centrally in this production. Yet both his choice of song and the use of its lyrics projected on the walls for all to sing, rather turns his feminist and LGBTQ-ally carriage back into a pumpkin when the entire theatre is encouraged to echo the famous vitriol of Fairytale of New York’s MacColl/MacGowan duet by full-throatedly joining in with the Kirsty MacColl character’s rhyming couplet with ‘maggot’. The lack of consideration of this detail rather reflects the looseness and indecisiveness of this production’s authorial voice. Whilst some of its gags suggest it wants to take down sacred cows, the production is primarily conventional and lacks much attention to detailed world-building. Whether a send-up of fairytales or of Panto itself, this production isn’t quite sure what it wants to say or be. In which case, casting better singers in a musical would be a good place to start.

[Edit 3/12/19: following publication of this review, the director (Jimmy Fairhurst) of Cinderella confirms he has worked with the production’s karaoke supplier to edit the projected text during the final song, replacing the homophobic slur that featured in the original 1987 recording of The Pogues’ Fairytale in New York. This critic congratulates Fairhurst and team on their sensitivity and responsiveness.]

Taking the term ‘pub theatre’ literally, Cinderella is an outrageous site-specific show that takes all the best of traditional British panto and tops it off with a pint. Penned by Luke Barnes (All We Ever Wanted Was Everything), this knees up of a night out brings all the characters you know, love and hate, to pull your mates, spill your pints and pour their hearts out on the karaoke. Crammed with live music, bingo, and a touch of midnight magic, Cinderella will have audiences dancing in the aisles and laughing their bloody baubles off. Think The Royle Family crossed with Elf… all set in a local boozer where the audience buy their drinks from the on-stage bar.