Home » Reviews » Review of Dear Lupin at the Apollo Theatre 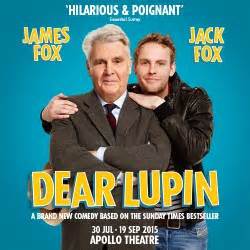 Michael Simkins adaptation of the letters written by a father to his son takes us on a journey through the lives of Roger and Lupin. Lupin is a troubled and somewhat wayward character portrayed well by Jack Fox. Roger Mortimer is a witty chap with a dry and sometimes cutting sense of humour and James Fox does it justice.

Watching James get the opportunity to portray different characters was quite comical. There was the camp auctioneer, an army General, and a rather epic lady of the night. At the start Roger states he will partake – “as long as you don’t ask me to dance” – and ends up dancing.

Thankfully the part of Lupin is more than just the son who received the letters. Simkins has done a great job on expanding this role and we get to see Lupin’s journey through his troubles, ending with his stint in rehab.

The script is well written and there are laughs a plenty throughout the play. The end of the show gets the emotions flowing but up to that point didn’t evoke much emotion in me. I expected more pulling at the heartstrings but as the play is so funny it wasn’t until the emotion was evident that I realised there hadn’t been much beforehand. The part of Roger gets the best jokes but does lack somewhat in fatherly love.

The lighting complements the set and mood on stage well. For example the stark contrast between the Mastermind section where a single light is the focus, to blue lights flashing in the upper walls depicting the police.

Would I recommend it? Definitely, it wasn’t perfect but rather enjoyable nonetheless.

Dear Lupin
Roger Mortimer’s often hilarious, sometimes touching, always generous letters to his son, Charlie, are packed with crisp anecdotes and sharp observations. The trials and tribulations of Charlie’s youth and adulthood are received by his father with both humour and resignation. Spanning twenty-five years, their correspondence forms a memoir of their relationship, an affectionate portrait of a time gone by.

Father and son James Fox and Jack Fox will star in this new stage adaptation by best-selling author Michael Simkins, in which he uncovers many more undocumented stories of Charlie’s wayward life and his relationship with his father.

Already in a good mood because there is abundant free parking after 1.30pm on a Saturday (and all-day Sundays) near the venue, Little Angel Theatre’s … END_OF_DOCUMENT_TOKEN_TO_BE_REPLACED

There’s an air of familiarity for people who have been in the entertainment industry in this narrative. Global pandemic or not, supply always exceeds … END_OF_DOCUMENT_TOKEN_TO_BE_REPLACED

This was originally meant to be called West End Musical Christmas, and got postponed as the Government had no choice but to impose another lockdown - … END_OF_DOCUMENT_TOKEN_TO_BE_REPLACED

Sovereign Song by CrushRoom is an immersive theatre show in partnership with established venue COLAB, which leans heavily on an inspired premise for … END_OF_DOCUMENT_TOKEN_TO_BE_REPLACED