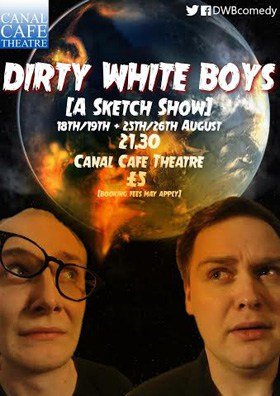 The Camden Fringe is a performing arts festival which attracts new writing, opera, musicals, stand-up, sketch comedy, cabaret, poetry and the like. Performances will be popping up around the Camden Borough throughout the month of August so get involved, it’s the closest us Londoners will get to the Edinburgh Fringe.

You’ll find ‘Dirty White Boys’ nestled among the grand homes and perfectly manicured lawns of Little Venice. Hidden in the walls of the Bridge House Pub you’ll find The Canal Cafe, a small but perfectly formed theatre space. Home to many a young hopeful, the Canal Cafe offers everything you would expect, a tiny box office awash with posters and fliers, a cosy bar with good wine and nice bar staff and upstairs, a rather charming little theatre venue.

Much like shows at the Edinburgh Festival, the audience numbers were small and tickets were being flogged at the eleventh hour by the hosts of the evening. However, we all know that old adage, ‘size doesn’t matter’ and just like the little theatre space the show inhabits, ‘Dirty White Boys’ proved that…good things come in small packages.

Yes, the audience size was small but the laughs were aplenty. To quote, ‘no odd thought in their brains have been left unturned.’ Glad am I as the creative process has churned out a series of well defined, well versed, and very funny sketches. Taking on the might of Dracula and his overbearing wife, science, office rivalry and the rather shocking etiquette of eating baguettines. The show would appeal to most, except possibly vegetarians but what shocks, entertains and this comedy duo has oodles of talent up the yin yang.

Chazz Redhead and Jack Robertson both have the ability to create real depth of character. Like peeling back the layers of an onion, the show introduces you to a new theme and takes you on a journey, adding another dimension layer by layer. Clever, witty and brilliantly acted, they weave in and out of each sketch seamlessly. They have created a dynamic show that is deserving of a bigger audience. The spirit of the fringe is all about “daring adventure and discovery”, so take a punt on this show. It’s a beautiful part of town, the venue is a genuine hidden gem and frankly, it’ll be the best fiver you’ve spent all day.

No quotes. No fanbase. No problem. Jack Robertson and Chazz Redhead are two sketch performers and improvisers from Birmingham who love making jokes almost as much as they hate each other. After years performing apart they’ve finally come together to create their debut show: Dirty White Boys.

A surreal display of characters and scenarios bound to leave you laughing. From science to office rivalries to Alan Rickman and all point in between, no odd thought in their brains have been left unturned. An exciting and hilarious debut show from two young accomplished performers.

If the dialogue wasn’t quite so eclectic and engaging, I might have decided to attempt to have kept a tally of how many times a trestle table is … END_OF_DOCUMENT_TOKEN_TO_BE_REPLACED

Doctor Who: Time Fracture by Immersive Everywhere has plenty to exhilarate both avid and casual Doctor Who fans, delivering on its promise to let … END_OF_DOCUMENT_TOKEN_TO_BE_REPLACED

A brief review of a brief play. It is, as the Prime Minister (Lisa Day) observes, extremely unlikely that her ‘letter of last resort’ would ever … END_OF_DOCUMENT_TOKEN_TO_BE_REPLACED

It’s a production of Hamlet that starts at 7:30pm and manages to come down on the ‘right’ side of 10:30pm - the hardcore fans and followers of … END_OF_DOCUMENT_TOKEN_TO_BE_REPLACED

For seasoned theatregoers, this version of The Three Musketeers comes across as one of those shows that takes a similar format to something one has … END_OF_DOCUMENT_TOKEN_TO_BE_REPLACED