Home » Reviews » Review of Don Juan at The Cockpit Theatre 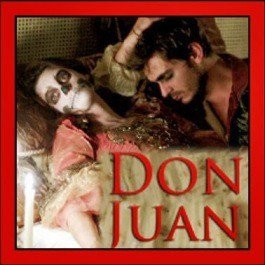 The stage for Don Juan is very sparce when we enter the theatre. A digital backdrop that keeps changing depending on where we are, a chair and table, a statue head and two lit candles. The production starts in a very confusing manner. Two dancers come on stage wearing white skull masks and perform a choreographed scene, ending with one flopping down in the chair and the other dancing past us, scaring my friend by making a little noise close to her face.

The skeleton dancer sat in the chair is soon greeted by Don Juan’s servant Sganarelle, who is hilarious in every scene and for me the strongest element of the production. Sganarelle, played by Christopher Paddon, serves as a narrator as he spills all of his master’s secrets to the skeleton, and by extension us. It’s a rather long scene and it shouldn’t work, but Paddon has just the right amount of exasperation, annoyance and obedience to make Sganarelle very likeable.

When Don Juan enters the room, it is with the arrogance and presence deserving of the character. He throws off his coat without a care, it nearly hits us who sit in the first row. Xavier Lafarie is quite magnetic, and with his messy black hair, beard and dark eye makeup, he looks like a cross between Jack Sparrow and the goth/cabaret artist Voltaire. There’s a feline quality to him, he moves with grace and command of someone who knows he behaves badly and frankly does not give a damn.

The dynamic between Don Juan and Sganarelle is hilarious. As an audience we tend to agree with Sganarelle’s responses through the play, and I often found myself looking at him as he watches Don Juan’s antics with part disdain, part resignation. Paddon is always present in the character, even when he carries furniture out on stage in the interval he is completely Sganarelle and thrilling to watch.

Don Juan’s actual antics are to modern eyes not very shocking, he renounces God and talks women into “marrying” him, having his wicked ways with them before moving on to the next conquest. In one scene, two peasant girls he has both promised to marry end up arguing over him, which he solves by inviting them both to bed. In another, the scorned Dona Elvira’s pain don’t see to touch him at all, and the only reason why it’s even remotely interesting is because her brothers are intending to murder him over this disgrace.

Said brother is played by Geraint Hill, who with the help of great costumes and masks also plays a peasant, a beggar, one of Don Juan’s creditors, his father and a very creepy statue that I am sure will haunt my friend in her dreams for at least a few days. His physicality is very impressive, especially as Don Juan’s father.

It’s an interesting and enjoyable production that does have its flaws, the random lines in French didn’t really help us who don’t speak the language. The dancing between each scene is similarly more distracting than anything and its purpose in the narrative isn’t completely clear, is it just to add some ambience during set and costume changes? I enjoyed the choreography and the dancers were very good, but the choice of simply flashing white lights for effect was more annoying than anything else. There was nothing wrong with the dance in itself, it just didn’t entirely fit with the play.

Don Juan is not going to challenge your morals like it did at its firsts production in 1660, as the shock has long since worn off. But the play has a lot of laughs and we left the theatre smiling.

Don Juan is playing at The Cockpit Theatre until December 8.

It is 2002 – another Royal Jubilee year, and HRH (Mary Roscoe) is due to open a new Science wing in a 'sink' comprehensive where Dr Derek Jones … END_OF_DOCUMENT_TOKEN_TO_BE_REPLACED

Dr Anna LaRosa (Dr Stefania Licari) has a lot to say. Just as well, as she’s the only one on stage in this medical comedy, which largely draws its … END_OF_DOCUMENT_TOKEN_TO_BE_REPLACED

Nikhil Parmar’s one-man show, originally written as a TV pilot, manages to touch on a wide range of themes from Islamophobia to modern fatherhood with … END_OF_DOCUMENT_TOKEN_TO_BE_REPLACED

Handel’s 1738 opera Serse (or Xerxes) is an exploration of power, love and human frailty. King Serse falls in love with the voice of his brother … END_OF_DOCUMENT_TOKEN_TO_BE_REPLACED

Lea Salonga has her fans. She also has some superfans, the ones who yell, “I love you Lea!” at almost every opportunity. If that wasn’t enough, there … END_OF_DOCUMENT_TOKEN_TO_BE_REPLACED