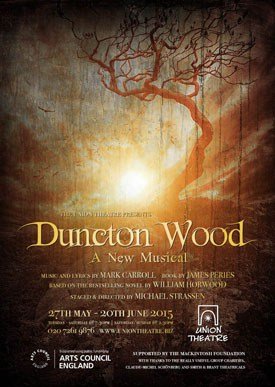 The “Fantasy” genre as a source for the musical theatre is in the eye at the moment because of the success of the film of Stephen Sondheim’s “Into the Woods” and with “Duncton Wood” we have another example of how allegory can tell us some truths that, perhaps, realistic theatre misses.

William Horwood’s novel was first published in 1980, a few years after “Watership Down” with which it is often compared. The moles of Duncton Wood, like Richard Adams’ rabbits, are a long way from Beatrix Potter, AA Milne or Kenneth Grahame!

“Duncton Wood” is a tough, uncompromising story summed up early – “Wild lands met must surely die”. There is a sense of Grahame’s Wild Wood and the threat posed by its weasels, but here that threat is from one group of moles to the established order of a more peaceful company. The peacelovers are led by “Hulver” a quietly spiritual character beautifully played and sung by Trevor Jones. The opening number, “The Blessing” sets the tone of his character and his strong and lyrical voice immediately captures the attention.

The existential threat to the established order is posed by the invaders led by Mandrake all dressed in black and with one hand a sort of “scissorhand”. They exude power and clearly intend to use violent means to force it on Hulver and his group. Among the latter is young Bracken, a gentle soul who is rather bewildered by the invaders though attracted by Rebecca, Mandrake’s daughter – a central character and finely played by Amelia-Rose Morgan, a recent graduate from the LSMT, who combines a sure touch with dialogue and high musicality. There are some charming light touches early in the action with innocent macho play-acting from the boys and romantic yearning from the girls “Your trouble is you’ve never been in love” is one line from a song they sing as a group. But when one invader says to one of the latter “I will have you when you surrender” we realise that the innocence will be short-lived.

The main romantic theme is the relationship between Rebecca, from the invaders, and Bracken from the established group. “You are part of me – you will never yield” sings Rebecca – and there is a beautifully crafted ballad “I wonder” which she sings with her fellow gang member Cairn. Although we are aware that we are watching a company of moles the costumes are not meant visually to convey the species – we don’t have anything like E.H.Shepard’s velvet coated Mole! The men are mostly bare-chested and very physical and the girls emphasise their femininity and allure well with movement. The choreography is subtle and the movement, which is not exactly dance, is quite excellent. There is lots of sniffing though and scent is clearly a big part of the quite explicit mating ritual. “I caught you on the breeze” says Cairn to Rebecca. And later in the Second Act Bracken says to Boswell (the “scribemole” or historian also wonderfully played by Trevor Jones) “You smell of wisdom” – a lovely line.

This is not a children’s story – there is a lot of graphic violence and no shortage of blood spilled. “These deaths will be avenged” is said and is a strong theme. The allegory of society under attack and the eternal battle between good and evil is ever present – as is the battle between tradition and the imperative for change. The newcomers are “from another system” which has both cultural and political implications. Religion is also ever present by allusion and by ritual – the search for the “Stone” and the reverence held for it has a Tolkienesque “ring” to it.

A very long novel has been compressed into an engaging work of theatre. The music is very good with some hummable melodies (always a good test!) and powerful and mostly unsentimental lyrics. The performances are wholly strong and the direction tight and the staging clever. The musicians, hidden from view, manage with three keyboards, a cello and reeds, to run a full range of sounds though it would be interesting to hear it played by a larger band in an orchestra pit. Whether that (a transfer to a major theatre) is in the minds of the production team I don’t know. In my view there is potential. It is an ambitious production with a large cast and it would, I guess, not be transferred without a major inflow of funds. The popularity of the Duncton Wood books potentially gives audience potential and the sheer quality of this new musical is such that it could be a winner.

When DUNCTON WOOD falls under a tyrant’s rule the old beliefs and nature itself are under threat. For young Bracken, and the few others with courage, exile may be just the beginning of a long road home… Magical, lyrical and animalistic this story of faith wars, youthful romance, freedom fighters, and deep friendship plays out in a woodland world torn apart by dictatorship and the battle to survive.

DUNCTON WOOD is staged by Michael Strassen who was named Best Director at the 2014 ‘Off West End Awards’ for BILLY at the Union Theatre, where he subsequently directed his acclaimed production of Stephen Sondheim’s PACIFIC OVERTURES. His previous work at the Union Theatre includes THE FIX, COMPANY and ASSASSINS (Best Production in ‘Off West End Awards’).
http://www.uniontheatre.biz/

This entertaining new musical is very fortunate in having as its leading lady the terrific Katie Elin-Salt: she is onstage almost throughout, singing … END_OF_DOCUMENT_TOKEN_TO_BE_REPLACED

“Keep it shallow, keep it pretty, keep it moving,” declares Justin Vivian Bond, letting the audience determine for themselves what precisely is really … END_OF_DOCUMENT_TOKEN_TO_BE_REPLACED

This play didn’t do that well on Broadway the first time around in 1963, and did worse the second time around, even with a revised script, running in … END_OF_DOCUMENT_TOKEN_TO_BE_REPLACED

One of the very few good things about the COVID pandemic is that the opportunities to live stream theatre performances have increased exponentially, … END_OF_DOCUMENT_TOKEN_TO_BE_REPLACED