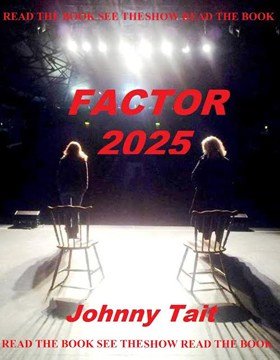 Factor 2025 is the future of reality TV according to the author Johnny Tait. A fabulous idea, hitting on a television programme close to our hearts. Like it or not Tait is right, X Factor, Britain’s got talent, has been the manufactured dross pumped into our living rooms, season by season for weeks on end.

Syco definitely dominates our prime time Saturday night viewing and yes it’s about time somebody came along and said what the rest of us are thinking.

Factor 2025 adapted from the novel of the same name, covers the manipulation, the sob story the woe is me tales that we hear week in week out, the “I was bullied”, “I was orphaned at a young age”. The whole pitying state that has taken over prime TV viewing.

So here I am watching Factor 2025 at The Hertford Theatre on a rainy Saturday afternoon. Trenton Powell an arrogant, intimidating, self-centred bloke. Manipulates acts that come along to audition for his failing TV show.

Viewing figures are at rock bottom, so much so it has been moved from prime time TV to a Sunday Afternoon spot on Channel 5. With no cheap publicity stories hitting the red tops Powell needs to gain some much needed publicity to boost his ego, raise the ratings and put him back up there. We see his long suffering assistant Mellissa (Natasha Lamar) tolerating all sorts of crap from him.

There are various acts, from singers, a struggling comic who performs in many disguises trying to seek Powell’s approval, the fabulous Velvet Coquettes burlesque troupe, Mid-Life 80s comedy singing duo, to the infamous Oddballs. Each and every one delivering a 100% knock out performance. With Powell finding the selling point in each act. The great soul singer that appears “normal” gets thrown off, reappearing later with not only a solid voice, but a story of how she has done time in Holloway prison for manslaughter. Powell signs that one up loving the back story.

We see the tears, the tantrums and the dramas as we fall in love with the characters along the way, with some very strong acting especially from Mary-Anne (Christine Lynn). The format of the show is strong, with a black box set.

The beauty of this show is the auditionees can change from show to show. I for one will be at The Rhodes Arts Centre Bishop Stortford on October 22nd at 7.30pm.

The pairing of work by Bob Dylan and Leonard Cohen in a single recital is a logical move. Though the latter died five years ago, his and his old … END_OF_DOCUMENT_TOKEN_TO_BE_REPLACED

If the dialogue wasn’t quite so eclectic and engaging, I might have decided to attempt to have kept a tally of how many times a trestle table is … END_OF_DOCUMENT_TOKEN_TO_BE_REPLACED

Doctor Who: Time Fracture by Immersive Everywhere has plenty to exhilarate both avid and casual Doctor Who fans, delivering on its promise to let … END_OF_DOCUMENT_TOKEN_TO_BE_REPLACED

A brief review of a brief play. It is, as the Prime Minister (Lisa Day) observes, extremely unlikely that her ‘letter of last resort’ would ever … END_OF_DOCUMENT_TOKEN_TO_BE_REPLACED

It’s a production of Hamlet that starts at 7:30pm and manages to come down on the ‘right’ side of 10:30pm - the hardcore fans and followers of … END_OF_DOCUMENT_TOKEN_TO_BE_REPLACED