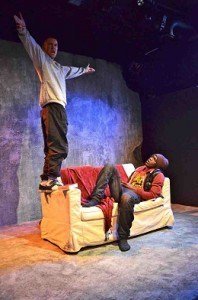 Gary, nicknamed Fog, is 17 and has lived in a care home with his sister for most of his life, as their mother died when they were younger, and their father went away in the army. He is estranged from his sister, who at some point became a drug addict and left. Gary has just moved in to a new flat on top of a tower block with his father, who has recently returned and wants to get the family back together. Gary is enrolled in college but doesn’t appear to be going, instead boasting to his friend Michael that he has become a drug dealer and will soon be rolling in cash. Michael, who lives with his young professional sister Bernice, is book smart and about to go to University, and has to deal with being torn in different directions by his friend and his sister. At the same time, Gary’s sister Lou returns, cleaned up, and wants to be a part of his life again.

Fog is a strong play with a brilliant cast, which includes Toby Wharton as Gary, the co-writer of the play. While some of the dialogue was at times difficult to understand, not being used to the slang or dialect, the story and characters are very compelling. You feel for the characters when they are hurting, and you root for them to find their way out of the mess. It’s at times sad, painful and funny, and you can go from quiet tension to a room full of laughter in just a minute. I also have to commend the clever way the play and direction deals with the characters smoking (or not), having cigarettes appear frequently, but always coming up with a plausible reason for them to never be lit – wait for the sister to leave, kid nicked his lighter, etc. While I enjoyed the performances of the entire cast, I have to especially mention Kanga Tanikye-Buah, whose portrayal of Bernice was very enjoyable to watch, and her subplot of getting a promotion, is a beacon of light in a play that otherwise might feel too dark. It also works as a good contrast to the other family’s lack of focus and plans for the future.

The most interesting relationship is between Gary and his father. You have some sympathy at first for Cannon, the father. It is implied that he was violent towards Gary and Lou’s mother, although it is not clear if the implication is that he was responsible for her death. Cannon does seem to be trying very hard to be a better father in the beginning, but life back in England isn’t what he expects and he is scarred by his experiences as a soldier. He is not emotionally equipped to be a parent for his struggling children, which becomes especially clear when confronted by his daughter about what happened to her in the care home.

The play ends abruptly with no clear resolution for any of the characters, no answers, and in some cases very little hope. It’s a story of rejection, of broken families and how relationships end. It’s not a feel-good story, but its realism and strong performances by the cast makes it well worth watching.

Fog is directed by Ché Walker and runs at Park Theatre until 11th November 2013.  The play is one act only and runs for roughly 90 minutes.

It is 2002 – another Royal Jubilee year, and HRH (Mary Roscoe) is due to open a new Science wing in a 'sink' comprehensive where Dr Derek Jones … END_OF_DOCUMENT_TOKEN_TO_BE_REPLACED

Dr Anna LaRosa (Dr Stefania Licari) has a lot to say. Just as well, as she’s the only one on stage in this medical comedy, which largely draws its … END_OF_DOCUMENT_TOKEN_TO_BE_REPLACED

Nikhil Parmar’s one-man show, originally written as a TV pilot, manages to touch on a wide range of themes from Islamophobia to modern fatherhood with … END_OF_DOCUMENT_TOKEN_TO_BE_REPLACED

Handel’s 1738 opera Serse (or Xerxes) is an exploration of power, love and human frailty. King Serse falls in love with the voice of his brother … END_OF_DOCUMENT_TOKEN_TO_BE_REPLACED

Lea Salonga has her fans. She also has some superfans, the ones who yell, “I love you Lea!” at almost every opportunity. If that wasn’t enough, there … END_OF_DOCUMENT_TOKEN_TO_BE_REPLACED