Home » Reviews » Review of FOUND at the Hope Theatre Islington 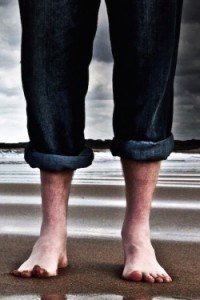 Sometimes, something or someone enters your life and completely turns it upside down, changing your perspectives and making the mental walls you have built for yourself crash down around you. Welcome to “Found” the latest production from Black Coffee Theatre currently at the Hope Theatre in Islington.

Mark (Jack Harding) is out for a run along the beach when he comes upon an unconscious man (Joseph Lindoe) lying on the sand. Being a good citizen, Mark phones for an ambulance and sits with the man who regains consciousness, but doesn’t speak or give any signs of acknowledgment of Mark or his current predicament. Later that day, Mark – showing way more compassion and trust than most people – returns to his flat with the man and offers him a place to stay as he recuperates, much to the surprise of his neighbour, best friend and budding romantic author Brian (Robert Saunders) who pops round to drop off his manuscript for Mark to read. Although still silent, the man – given the name of ‘Jack’ by Mark – settles into Mark’s life very quickly. This is pretty good for Mark who isn’t really having a great time of things. Spending his days in a job that probably isn’t suited for him, mooning over the lust of his life, Kate (Elizabeth Hope) a high flying colleague – who has a secret that she wants to use to her advantage. Mark hopes that Kate will fill the void left by the departure four years ago of his former girlfriend Hayley (Nina Bright). The reality is that Mark’s life couldn’t be said to be setting the world on fire. But, thanks to Jack – who starts to read Brian’s manuscript – Mark’s life is going to change in ways he could never envisage, ultimately begging the question who and what was ‘Jack’ and what will be the result of his time in Mark’s life?

“Found” is written and directed by Luke Adamson, who uses very naturalistic dialogue to make the audience ask themselves questions from the moment they enter the theatre and see ‘Jack’ lying on the floor in front of them. I found myself initially staring at the body and wondering what was going happen, then after a couple of minutes with there being no movement, it was almost as if I had just accepted ‘Jack’ as part of the set as I looked around at the rest of the stage and the other audience members – in a way mirroring what was going to happen in the play with everyone’s acceptance of ‘Jack’ as a part of Mark’s apartment. Once the play started, I was again questioning myself. Would I have taken this silent stranger home and left him there while I went to work? Unlike Mark I wouldn’t and yet you can see why he did. Mark is a noble kind of guy and seemed to establish something with ‘Jack’ from the moment they met. And it is their relationship, along with Brian, that is the heart of the play. Mark can talk to ‘Jack’ and there is beautiful scene where he conducts a conversation with ‘Jack’ about asking Kate out. Not really a conversation as ‘Jack’ doesn’t speak, but Mark reacts as though ‘Jack’ had asked him questions or made comments.

This is a play where the acting needs to be really strong to match the strength of the script, and all of the actors rose to the task brilliantly deserving recognition for their ability to engender real emotion about their characters- got to say I didn’t like Kate from the moment I saw her. However there were two stand-out performers for me in “Found”

Let’s start with Joseph Lindoe’s performance as ‘Jack’. Being on stage for almost the entire 90 minutes of the show, ‘Jack’ grows as a character from the terrified man when he first regains consciousness, through to moving into Mark’s where his faculties slowly return and we see a man being plagued by inner demons. Joseph plays this all so well, allowing ‘Jack’ to react to events around him with a whimsical expression and real comprehension in his eyes. Jack Harding’s Mark is equally impressive, being a really nice guy but never in a self-righteous, look at how great I am, kind of way. All the way through I really wanted Mark to end up having an awesome life, such was the strength and believability of Jack’s performance.

So, a really lovely play with some wonderful gentle humour, laugh out loud moments – I don’t think I will ever forget Brian and Mark’s performance of ‘Total Eclipse of the Night’ and genuine emotion – Brian’s reaction to the realisation of his unrequited love was heart-breaking to experience. “Found” is a fabulous play that with the truthfulness of the writing and acting draws its audience into the world of Mark, ‘Jack’, Brian, Kate and Hayley and leaves you wanting to know ‘what happens next?’

“Feels like God’s constantly teasing us. Dangling happiness and joy in front of our eyes and then kicking us in the b****cks and running off, giggling.”


Found tells the story of Mark, a twenty-something office worker with a 2.2 from Hull who lives alone and hasn’t had a girlfriend for four years, but whose fairly uneventful life is interrupted by the discovery of an unconscious man on the beach near his flat. Mark does what any other person would do; he stops to help and offers the man a bed until he can remember who he is. The man slowly recovers, but never speaks and sparks a chain of events that will bring Mark’s life crashing down around him.

First produced by Black Coffee Theatre alongside ARC Stockton, Alnwick Playhouse and Northern Stage in 2013 this exciting new play examines how we involve ourselves in the lives of other people, how our actions can affect them and questions what happens if we stop thinking about ourselves for a second and actually listen to other people.
The performance lasts 90minutes without interval.

UNDER 18s ARE NOT PERMITTED INTO THE THEATRE FOR THIS PERFORMANCE.
LATECOMERS CANNOT BE ADMITTED IN ANY CIRCUMSTANCES. ARRIVE IN GOOD TIME FOR THE START TIME OF 7.45PM.

This isn’t the first production to go down the road of referencing a one-star review of their show (from a different publication, I hasten to add). … END_OF_DOCUMENT_TOKEN_TO_BE_REPLACED

Two sisters reunite after the death of their mother, and secrets pour forth. Robert Holman’s new play gently exhibits talented classical acting in a … END_OF_DOCUMENT_TOKEN_TO_BE_REPLACED

Everyone’s vexed in this show, though some have clearer reasons to be than others. Mrs Driscoll (Tameka Mortimer) is struggling with a home life that … END_OF_DOCUMENT_TOKEN_TO_BE_REPLACED

The penultimate production of the 2021 Tête à Tête Opera Festival, based at London’s Cockpit Theatre and showcasing contemporary and avant-garde new … END_OF_DOCUMENT_TOKEN_TO_BE_REPLACED

Relatively Speaking premiered in 1967 and is the sort of show that is, by contemporary standards, very much of its time, and not just because of … END_OF_DOCUMENT_TOKEN_TO_BE_REPLACED