Home » Reviews » Review of Fracked! or Please Don’t Use The F-Word 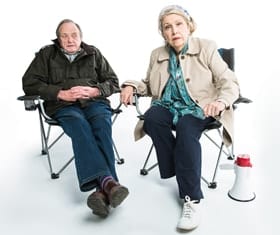 Alistair Beaton is a fine playwright. His excoriating demolition of New Labour, Feelgood, remains one of the funniest plays of the last twenty years and in his new play – Fracked! or Please don’t use the F-word, Beaton is clearly trying to channel some of the same magic. But, while the play is sporadically amusing, Fracked! is simply too preachy and there are too many similarities with Feelgood as well as echoes of Richard Bean’s excellent play about climate change The Heretic.

Like Feelgood, the focus of Fracked!, directed smoothly by Richard Wilson, is spin. Where Beaton’s earlier play gave us a slick and amoral political party and two spin doctors – one good and one very, very bad – Fracked! gives us the slick and amoral PR company Moxley Biggleswade and two ‘PR professionals’ Joe and Malik, charged with spinning the plans of Deerland Energy to begin hydraulic fracturing – fracking – and extract shale gas from beneath the village of Fenstock. Elizabeth, a retired incomer played by Anne Reid, decides to stop Deerland and, as the play starts, she begins her mission by emerging from the audience to interrupt a presentation that gives a straightforward but, as becomes clear, incomplete explanation of what fracking entails. An amateur recording of the protest is posted online and the warning not to “frack with your granny” becomes a rallying call for the anti-fracking movement locally and nationally. Reid is absolutely convincing as a reluctant hero, St George against the PR-fuelled dragon of Deerland. As Elizabeth’s husband, James Bolam is outstanding, adeptly showing some of the younger members of the cast how to grow old and steal scenes gracefully. Pitted against Elizabeth is Joe, superbly drawn and played with tremendous energy by Harry Hadden-Paton. Joe is a monster, hungry to defend the indefensible and more than happy to turn the mirror back on anyone who criticises how he does it, including the audience when he is highlighting routine hypocrisy about climate change. Like his counterpart in Feelgood, Joe is quite willing to do what has to be done and even if he does not go as far as the murderous press secretary in Beaton’s earlier play, you are quite certain that he would be capable of anything. It turns out that, like the Government in Feelgood, Deerland has done “a very bad thing”. The question is what it is that Deerland has done and how they will be caught and how, of course, Joe and Moxley Biggleswade will still come out on top.

As the key company director on the Fenstock project, Michael Simkins gives a nuanced performance, balancing a maidenly dislike of swearing – there is a lot of swearing – with a disdain for environmental regulation while making the case for fracking as the only way to cut reliance on foreign energy. And although there are some real weaknesses among the minor roles, there are also some good performances. Freddie Meredith – as a young protestor not unlike the teenage climate change campaigner in Bean’s Heretic – is funny and touching, especially in his scenes with James Bolam. While Andrea Hart, playing two roles, is hilarious as a local dignitary, struggling to retain her poise as she is undermined by technology in the play’s opening scene. And Steven Roberts has a brief but memorable cameo as a waiter in the scene that ends the first half of the play.

Beaton is a brilliantly funny writer, jarring in Fracked! only with an audience-repelling reference to a politician’s “historic sex offences” and one or two up-to-the-minute references that felt a little forced. He also clearly has strong views about fracking and an enviable ability to inform his audiences effectively, here highlighting exactly what it entails and the consequences, good and bad. But hundreds of shale gas drilling licences have already been issued and hundreds of applications are already in with more expected. And if slowing or stopping that tide was the aim, Fracked! falls short.

Alistair Beaton’s provocative new comedy takes us to an idyllic English village threatened by an energy company intent on drilling for shale gas. Anne Reid plays Elizabeth, a retired academic who finds herself transformed from obedient citizen to angry protestor. While her increasingly grumpy husband (James Bolam) longs for the quiet life, Elizabeth soars to fame via social media. Desperate to get planning permission, hard-nosed PR men team up with a corrupt local councillor to persuade the villagers that fracking is a good thing. Elizabeth’s having none of it, and mounts the barricades…..

This new razor-sharp black comedy by Alistair Beaton takes a timely look at the conflicted core of planetary energy and earthly power. A much-praised political satirist, Beaton’s television work includes the BAFTA-nominated The Trial of Tony Blair and Spitting Image, and plays such as the West End hit Feelgood.

The distinguished cast includes James Bolam as Elizabeth’s husband Jack, whose credits include New Tricks (BBC) and Glengarry Glen Ross (Donmar Warehouse, Olivier nomination). Anne Reid plays Elizabeth. She is acclaimed for her many award-winning roles including Hedda Gabler (Old Vic) and Last Tango in Halifax (BBC). They are joined by Michael Simkins, known for his many TV and West End roles, most recently Yes, Prime Minister and HayFever.

Booking to 13th May 2017
Richmond Theatre
Book Tickets from ATG

EverAfter, A mixed up fairy tale at the Chickenshed Theatre, is a great Christmas show. As the title suggests, this is a concoction of stories. The … END_OF_DOCUMENT_TOKEN_TO_BE_REPLACED

The thing about Panto is not to over-think it. It’s about having fun and surrendering to the Christmas spirit. Like Christmas crackers, there is a … END_OF_DOCUMENT_TOKEN_TO_BE_REPLACED

Anyone who's worked in investment banking knows it's largely an intellectually-free zone, polluted with people who calculate each other's value … END_OF_DOCUMENT_TOKEN_TO_BE_REPLACED

By the production’s own admission, the version of events as detailed in Bonny & Read is unlikely to equate to an exactly full and fair account of … END_OF_DOCUMENT_TOKEN_TO_BE_REPLACED