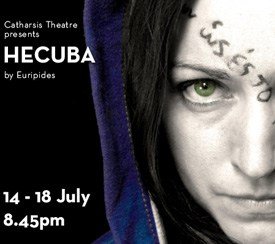 As a novice to Greek theatre I was looking forward to an evening of education and entertainment watching CATHARSIS’ new incarnation of HECUBA at the White Bear Theatre.

This interpretation gave the audience the full force of Classical Greek tragedy detailing the lamentable tale of Hecuba Queen of Troy, whilst at the same time often to great effect, although sometimes clumsily, drawing parallels with a similarly bleak modern day experience of woe.

‘Hecuba’ played with great gusto and commitment by Lucinda Lloyd also portrays ‘Willow’, her modern counterpart. Chris Vlachopoulos’ script undoubtedly makes a good attempt to portray the two characters sharing a similar plight. It is however not always easy to unify the clear-cut ancient tragedy of the human sacrifice of a daughter and the betrayal and calculated murder of a son with its modern, more circumstantial and unfortunate turns of events of a daughter with a terminal disease and the accidental death of a son. While the original Greek would stand alone as a drama, the modern story most likely wouldn’t.

Although the heartlessness of NHS budget cuts and the ineptitude and unfairness of police brutality serve as the forces of evil in the present day story, they simply do not carry the weight needed to leave the audience in fear and awe. Instead we ended up feeling very sorry for Willow, whilst at the same time being left unsated by the rather meagre pickings of the actual Greek which pepper the play.

Supporting cast members Ben Scheck, Roisin Keogh and Isobel Wolff doubled up skilfully on characters from the modern plot as well as the story of Hecuba, and aligned nicely as a chorus at times, reinforcing the drama’s sense of doomed inevitability.

Laura Stanfield’s very fine set gave the sense of a sprawling Mediterranean Sea, scattered with tiny boats whilst also cleverly conveying a suburban living room. The use of bundles of newspapers as furniture gave the actors lots to work with, enabling them to transform beds into podiums, and keeping an ever present menacing reminder of a media which pervades modern life.

Whilst I understand the pertinence of this left leaning political statement I feel that the story of Hecuba may have been better presented and more effective to watch without the modern story. Perhaps a closer examination of the text itself with a more subtle reworking may have allowed more insightful parallels to be drawn. In essence though it was a thoroughly entertaining hour of drama at The Bear and I’ll be on the lookout for more Greek drama from here on!

HECUBA: How long can you keep losing until you snap? And when you’re forced to snap, can you still cling to what makes you sane, whole, human?

Following the success of Hippolytus, Catharsis Theatre continue to develop their distinctive physical and storytelling style, drawing equally from the ancient source material and from the world around us, forging new relationships between present and past, story and reality.

Devised in response to the fallout of the General Election and following Euripides’ tale of the former queen driven to gouge out her antagonist’s eyes and murder his sons, this will be Greek drama as you’ve never experienced it before.

Hecuba is a partnership between director Justin Murray and writer Chris Vlachopoulos, as well as a cast including frequent collaborators Ben Scheck and Isobel Wolff. Justin directed Hippolytus earlier this year. Chris is a writer and dramaturg originally from Corfu. His play My White Flower (Daybreak) is shortly to receive a reading at the Soho Theatre.

How can a play be both charming and devastating? Through its tight script, abundant humour and pitch-perfect performances, 4th Country manages to … END_OF_DOCUMENT_TOKEN_TO_BE_REPLACED

Britain, so a London cab driver once told me, is obsessed with the Second World War, as though it happened just recently. Power Luncheon would seem, … END_OF_DOCUMENT_TOKEN_TO_BE_REPLACED

William J Dunleavy, author and star of this monologue play, is a writer and face to watch. He enters the room (as the staging is more geared towards … END_OF_DOCUMENT_TOKEN_TO_BE_REPLACED

Cirque du Soleil’s Luzia is a joyful whirl through a psychedelic Mexico, which reminds us why live theatre is so special. Anyone who goes to … END_OF_DOCUMENT_TOKEN_TO_BE_REPLACED