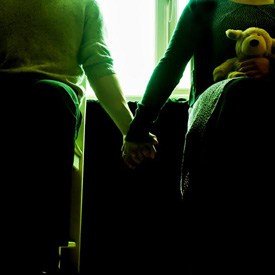 Home Free by Lanford Wilson is a perfectly constructed piece of writing, rather like the two characters in this play – everything that at first seems like a dramatic scattergun turns out to have its own immovable logic and to live within its own rules.

Lawrence (Rob Peacock) talks to his imagined friends Edna and Claypole while Joanne (Lindsey Huebner) is out trying to bring home both food and tales of her adventures. At first I wasn’t sure that the play would be for me, the opening scene is so unsettling and having not seen Wilson’s work before I wondered if this was going anywhere – I needn’t have worried – from the moment Joanne returns (played with great humour and dexterity by Huebner) the play crackles into life and we realise that we are witnessing a strange and surreal world, but one that works for these two lonely siblings.

Courtney Larkin’s direction means that the pace stays fast and the dialogue is often rapid fire and seguing from comic to tragic to childish and around again. Both Peacock and Huebner are seriously good in this short play, and everything from the imaginary children, the Ferris wheel and the terrifying threat of Prune Face from beyond the door are brought into play. It’s funny too, I should mention that, because there is lots of humour in this play – both within the dialogue, the play between characters and the actors’ performances.

There are a few choices I wasn’t sure of, the blurb for the play says ‘a brother and sister… living in a cluttered playroom, surrounded by toys.’ The stage at Etcetera Theatre didn’t feel overly cluttered, in fact it felt very ordered, with everything having a place and everything tidy and controlled – I did wonder whether something more chaotic might work better for the play, and might make us worry more about the siblings ability to cope with the future they have ahead of them.

But there are some beautiful moments too, Edna and Claypole gradually start to feel as much a part of the play as Lawrence and Joanne, and the claustrophobic love between the two is tangible, they are at their best when in flights of fancy and when reality kicks in, neither seem fully able to deal.

Veritatus Theatre have put a lot of love and thought into bringing this play to life and when the humour pings between the pair, it’s delightful to watch. This is a tightly written and engagingly executed piece of theatre. Definitely worth a ticket!

Lawrence and the pregnant Joanna, a brother and sister in their mid-twenties, have cut themselves off from the world outside. They live in a cluttered playroom, which they share with two imaginary companions. In this intimate space, they strive to keep an alien force at bay, all the while maintaining the illusion of their fairy-tale “A poignant fairy-tale quality pervades this story of a brother and his incestuously pregnant sister and helps the play achieve an astonishingly tender tension between sickness and sweetness.” Time Magazine

Playwright Lanford Wilson won the Pulitzer Prize for Drama in 1980 for his play Tally’s Folly. He is renowned for his earthy and authentic verbal interchange, demonstrated with cutting precision in one of his earliest works, Home Free!.

Following the success of Daniel Arnold and Medina Hahn’s Tuesdays and Sundays at the Brighton Fringe, Home Free! is the second production for Theatrum Veritatus. Home Free! boasts an intimate team of some of the finest recent drama school graduates from East 15 and the Bristol Old Vic Theatre School. With over half of the creative team hailing from Canada, we are passionate about the cross-fertilization of the North American and British theatrical traditions. We believe in bringing together cultures from both sides of the pond to explore our shared heritage, and our collective future.
www.theatrumveritatus.wix.com/homefree

Harold Shipman, known to his many patients, family and friends as ‘Fred’, was Britain’s worst serial killer. The official inquiry into his crimes … END_OF_DOCUMENT_TOKEN_TO_BE_REPLACED

Being one of Arthur Miller’s best-made and most challenging plays, The Crucible is also one of his most frequently performed. I was going to say … END_OF_DOCUMENT_TOKEN_TO_BE_REPLACED

To be fair, Linda Lavin called her concert Love Notes, there’s an album of the same name, and that’s more or less what it was about - variations on … END_OF_DOCUMENT_TOKEN_TO_BE_REPLACED

Noughts & Crosses is a euphemism for blacks and whites. The Noughts are the whites and the Crosses are the blacks. In the world of the play, the … END_OF_DOCUMENT_TOKEN_TO_BE_REPLACED

This ‘juke box’ musical offers highly polished, undemanding, feel-good entertainment, showcasing, as it does, 30 songs dating from the 1960s to the … END_OF_DOCUMENT_TOKEN_TO_BE_REPLACED