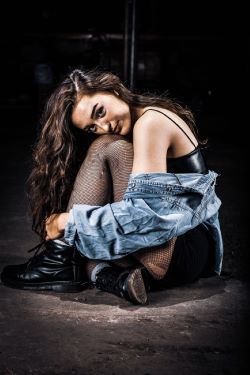 Wow. This spectacular site-specific production of Jonathan Larson’s enduring musical Rent is a wonder to behold, a sumptuous song-fest to enjoy and a spiritual boost for all the senses to get immersed in. The old Frogmore Paper Mill lends itself superbly as the near-slum, New York tenement, dregs-of-society-land location providing a captivated audience with the extremes of raucous clap-along euphoria seated in a makeshift bar, to the deeply moving emotional turmoil of high-ceilinged, scaffold-walkway-laden vaults that grip the senses and provoke the mind. It’s a tour de force, a crazily brilliant American tour de force, the raw punchiness of which is totally unexpected in this heart of England backwater near Hemel Hempstead.

It’s the vision of Director Dan Cowtan to let his Vivo D’Arte company loose in this dark satanic mill to release the story of struggling artists battling against the cruel winter cold and the cruel hand of the landlord demanding rent. There’s a great band, directed by Erika Gundesen, tucked away in a balcony in one of the three locations and the pulsating rhythms set the pulses racing while we, as promenaders, are guided through this twilight world of drug addicts, drag queens and enduring friendships tested to breaking point. The songs are wonderful, sung with unrelenting verve by this powerful troupe of energised performers, freed up to play it to the limit by Cowtan’s fluid direction, the epitome being the magical Seasons Of Love that dominates and permeates the second act.

Connor Dyer as Mark – the camcorder-wielding, would-be documentary maker – leads the ensemble with a will-o’-the-wisp-like jauntiness that sees him flit from room to room and level to level like a slightly demented dragonfly,
always probing the filmic possibilities as well as being a sounding-board and shoulder to cry on for the other characters. Inevitably taking the eye is Casey Bird as performance artist Maureen who’s rendition of Over The Moon gives the phrase “over the top” a cakewalk like inadequacy. And Aran MacRae as aspiring rock-musician Roger creates an insistent, percolating, quiet intensity to proceedings – a necessary counterpoint to the frenetic goings-on around him.

The central potency of the piece is developed through the character of Angel, an inspiring performance by Andrew Rawlinson-Heath, which delineates the mid-nineties sombre backdrop of the effects of AIDS/HIV and whose riveting death-scene is relayed through the stroke-of-genius use of multiple screens embedded in the fabric of the setting. As well as giving us eyes on hidden parts of the inevitably sight-line-inhibited locations it feeds into the docu-drama narrative of real-time action. Technical Director Jon Stacey takes due credit for this as well as his extraordinary lighting design which captures the ambience of the space as well as achieving the difficult aim of illuminating performers scattered amongst the audience without disconcerting those watching them.

Lizzie Emery gives an affecting and effectual performance as Mimi, releasing raw emotion at the moving denouement of the piece whilst Andrea Campusano’s choreography is an essential component of the show with performers gyrating precariously on scaffolding, tumble-dancing on stairways and leaping around on tables, bar-stools and even an old car. It’s vibrant and it’s frenzied and its all one can do not to join in.

Actually, I almost did. Moving from one location back to the bar at the interval I was first in the queue as is my customary modus operandi. I ordered a glass of wine and the bartender refused to serve me. He was, though, handing out bottles of Bud to people all around me. I tried again. Turns out they were all cast members and this was not the interval. I turned away sheepishly and found a table. Now come on people: if this is proper immersive theatre surely the reviewer should be served as part of the action!

What a night out. Rent is a sensational show with a dazzling, totally committed and talented cast. Despite the tragic overtones, one comes away with uplifted heart, tingling senses and zinging spirits. There really is only one word for it: Wow.

Staged at the Frogmore Paper Mill in Apsley, Hertfordshire, the experience involves audiences following the actors around the building.

Larson’s 1996 Tony Award-winning musical is loosely based on Puccini’s La Boheme and follows a year in the life of a group of impoverished artists struggling to survive and create in New York’s Lower East Side, under the shadow of HIV/AIDS. It features the songs “Take Me Or Leave Me”, “Seasons of Love” and “La Vie Boheme”.

Vivo D’Arte production follows on from their similar take on Jason Robert Brown’s Parade last year, and will run from 10th to 21st of July 2018.

Loosely based on Puccini’s La Boheme, Jonathan Larson’s Rent follows a year in the life of a group of impoverished artists struggling to survive and create in New York’s Lower East Side, under the shadow of HIV/AIDS.

Directed and produced by Dan Cowtan, Vivo D’Arte is managed by Cowtan.

Follow @RENTattheMill for the latest news regarding this production

Britain, so a London cab driver once told me, is obsessed with the Second World War, as though it happened just recently. Power Luncheon would seem, … END_OF_DOCUMENT_TOKEN_TO_BE_REPLACED

William J Dunleavy, author and star of this monologue play, is a writer and face to watch. He enters the room (as the staging is more geared towards … END_OF_DOCUMENT_TOKEN_TO_BE_REPLACED

Cirque du Soleil’s Luzia is a joyful whirl through a psychedelic Mexico, which reminds us why live theatre is so special. Anyone who goes to … END_OF_DOCUMENT_TOKEN_TO_BE_REPLACED

I am always very excited to come across a new theatre, and Esher Theatre is a real ‘find’, conveniently situated near to Esher High Street and right … END_OF_DOCUMENT_TOKEN_TO_BE_REPLACED

Cecil Sharp is no unsung hero. Without the energy of this driven and at times prickly musician, the traditional folksong of rural England would very … END_OF_DOCUMENT_TOKEN_TO_BE_REPLACED