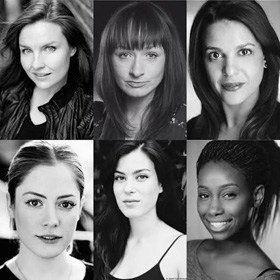 Another visit to the Camden Fringe and another fine show. That’s my top level view of the Thelmas production of “Ladylogue!” at the Tristan Bates Theatre.

This particular show consisted of six one act plays all written and performed by women. We started off with “Ghost” by Lucy Foster. In a small bedroom a young lady by the name of Alex (Kim Burnett) is getting ready for a job interview. In a Bridget Jones way she has a self-help book on interviewing skills and is practicing everything from her firm handshake to decide if she is a people person or not. As she prepares, she talks about herself, her relationship with her parents, particularly her mother, and her older sister, Sally – and we come to realise that who initially came across as quite a fluffy type of girl is in fact a deeply troubled person whose insecurities, started as a child, have come to dominate her later in life.

Story number 2 was Madeline Gould’s “Ladykiller” and I can’t tell you very much about it as this has to be spoiler free. What I can say is that the action concerns a hotel chambermaid (Hannah McClean) who has done something very bad indeed. All I am going to say is that Madeline has written a truly awesome script and Hannah performed one of the finest pieces of acting I have ever seen – and going by the shocked reaction of the audience around me, I wasn’t the only one to think that way.

Play number three was the wonderfully titled “My Sons are Doctors” by Mina Maisuria. In a supermarket toilet, a young Indian lady (Asha Kingsley) rushes in to avoid Mrs Patel. Her reason for this avoidance? Well, there are a few but mainly it’s about societal expectations. After all, Mrs Patel’s sons are all doctors – as she is proud of boasting – whilst our heroine has been through a horrendous tragedy in her life and now dotes on her son, who she spoils rotten. You get the feeling that she needs help, as she has never got over previous events and feels isolated from those happy, successful people around her.

If you want a salutary lesson on the good and evil of social media, then play number four “Family (Mis) fortunes” – written and performed by Maria Yarjah – is the play for you. A young girl is living her life and sharing everything on Facebook – especially her love and relationship status. Well everyone does it, don’t they? Unfortunately for her, all of her, rather conservative, family are her friends on Facebook and, especially in the case of her father, definitely do not approve of the things she is doing – particularly the ‘partying’ boyfriend. This leads to a final showdown all of which is captured and spread through the power of the same social media the girl used to show how great her life was.

On to the penultimate play – “The Night Tella” by Sarah Milton. In what we assume is a hospital room, a young girl (Joana Nastari) is talking to her friend Amanda – who appears to be in a coma following a horrific attack – and trying to get her to wake up by reminding her of things that have happened to the two of them. Now, I will be honest and say that I really didn’t get on with this piece – poetry and I are not comfortable bedfellows – but my companion really liked it and even a poetic philistine like me could see the work and skill that had gone both into writing the piece and the performance itself.

Finally, we were treated to “Zero” by Serena Haywood. Sarah Cowen is keeping an online blog as a way of dealing with her agoraphobia. Her room has become her spaceship and the world outside is the vastness of space. Many times she sets off for a space-walk but never quite makes it through the ‘airlock’ despite the, often lukewarm, support of her blog readers. And then one day, she decides enough is enough and gets ready to put the ship into self-destruct mode until something occurs which may give her the courage to take that ‘small step for woman’

So, six plays from six writers covering a range of subjects, “Ladylogue!” was a really great piece of theatre that I and my companion enjoyed and talked about for quite a while after. We both agreed that “Ladykiller” was the outstanding piece of the show and had quite a heated debate about the nuances of “The Night Tella” which, at times hinted at a story behind the story. A thoroughly enjoyable and thought provoking evening that delivered some excellent entertainment great performances to an appreciative audience.

The Thelmas return to the Tristan Bates Theatre with 6 new one-woman shorts, written by some of the UK’s finest emerging, female playwrights. Be they hopeful or just plain hopeless, these tales reveal the inner lives of women dealing with whatever the world throws at them, by all means necessary!

It’s a show of its time. Well, it isn’t really – it’s a show first produced in the 1950s, with this production placing the action in 1913. The set … END_OF_DOCUMENT_TOKEN_TO_BE_REPLACED

The whole narrative in Lift is almost totally implausible, at least to me, until the penny dropped about two-thirds of the way through. The central … END_OF_DOCUMENT_TOKEN_TO_BE_REPLACED

“Three Decembers is the finest modern opera that I have seen.” So wrote Chicago reviewer Tom Williams, having seen its premiere in 2008, and I can do … END_OF_DOCUMENT_TOKEN_TO_BE_REPLACED

There’s a surrealness to Mission that the production’s own script readily acknowledges, with more than one character admitting, separately, that they … END_OF_DOCUMENT_TOKEN_TO_BE_REPLACED

In June 1988, Bob Dylan set off on what has become known as “The Never-Ending Tour” and apart from a break due to the pandemic, it’s still going 34 … END_OF_DOCUMENT_TOKEN_TO_BE_REPLACED